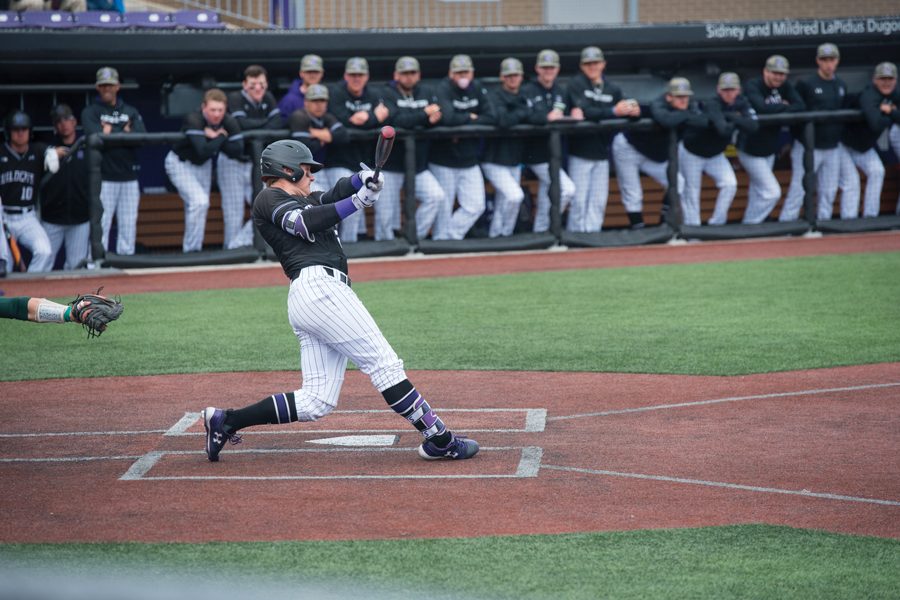 Willie Bourbon takes a swing. The junior first baseman tallied 3 RBIs on Sunday, but the Wildcats still lost to the Spartans, 6-5.

Before Northwestern took the field Sunday, coach Spencer Allen addressed the team and told the players exactly how they could become more competitive and find an extra 10 percent to give.

Sophomore third baseman Charlie Maxwell said Allen harped on them valuing each pitch more than they had been, so Sunday’s game against Michigan State fittingly came down to a sequence in which the count was full and the go-ahead run was at the plate with two outs in the eighth inning.

But on that pitch, junior outfielder Ben Dickey chased an outside pitch to strike out and senior Connor Lind was caught stealing at second, ending the inning and NU’s best chance at preventing a series sweep. The Wildcats (9-24, 1-14 Big Ten) lost 6-5 to the Spartans (14-21, 6-5), extending their in-conference losing streak to 12 games.

“We competed here like we talked about,” Allen said. “We just have to try to stay there, stay consistent and and compete like that. If we can (get) 10 hits and five runs, I’ll take that all day.”

In the last outing of the three-game series, NU found confidence against the Spartans’ pitching, and the Cats scored as many runs Sunday as they did in the first two games. Maxwell and junior first baseman Willie Bourbon each hit home runs in the sixth inning.

Maxwell said the team readjusted its approach after hearing Allen, and NU’s hitters made the right decision on nearly every pitch to put together quality at-bats.

“When you take a pitch off, you might miss a fastball you could have hit, or with two strikes, take a pitch you needed to foul off,” Maxwell said. “Even when hits aren’t falling, we just want to tell ourselves we need to compete with every pitch. We started doing that and had some longer at bats, strung them together and got some runs.”

For the second time in three games, a freshman starter gave up four or more runs in the first inning, but both times rebounded to give the lineup the chance to make the game competitive. Quinn Lavelle held Michigan State scoreless Friday from the second to the sixth inning after a five-run first, while Sunday’s starter, Jack Pagliarini, retired the final 15 batters he faced over five scoreless innings.

The Cats took the lead in the seventh after Bourbon hit a 2-run single, but Michigan State first baseman Zack McGuire brought his teammates out of the dugout to celebrate with his home run to left field senior reliever Richard Fordon in the eighth.

After NU squandered its chance to take back the lead in the eighth and went down scoreless in the ninth, sophomore second baseman Alex Erro said he was taking responsibility to ensure his teammates are taking positive strides to turn around this season.

“(I’m) making sure that everyone gets in here and gets their work done,” he said. “Making sure they’re not riding that emotional roller coaster … I feel that a lot of other teams, a lot of other kids, would have given up at this point in the season, but that’s a testament to a lot of hard work we’ve put in.”