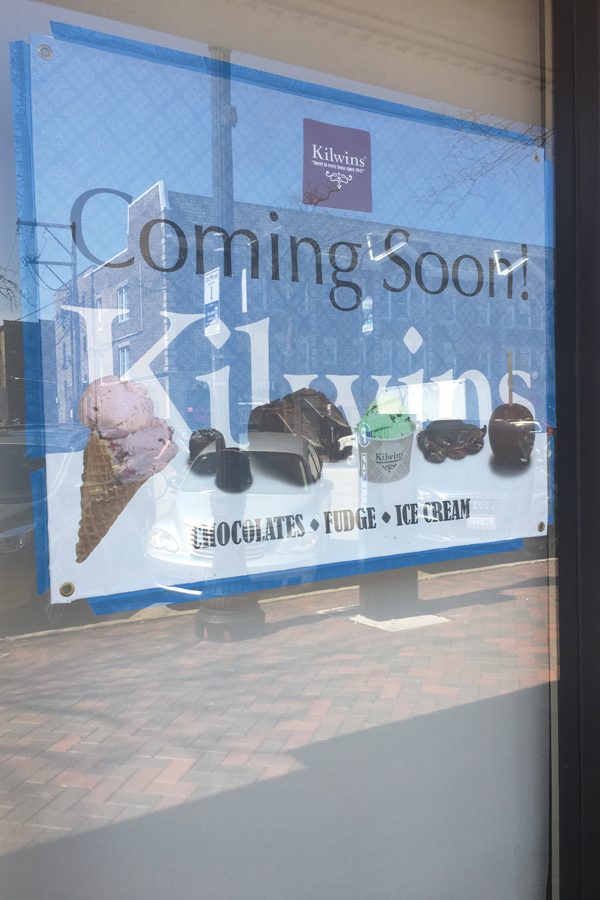 A sign advertising the opening of Kilwins at 1724 Sherman Ave. Chicago resident Jeff Schneider said he is in initial talks with the city government about bringing a Kilwins franchise to Evanston.

Kilwins — a national candy and ice cream franchise — is sweet on Evanston.

Chicago resident Jeff Schneider said he is in initial talks with the city government about bringing a Kilwins franchise to Evanston. Schneider, who will own and operate the location, plans on opening the shop this fall at 1724 Sherman Ave., the former location of AAA Chicago. He said he loves Kilwins ice cream and fudge and decided to open his own store.

Schneider recently left a 20-year career in finance after he and his wife decided to become small business owners. He emphasized that Kilwins does not operate like a typical chain, but instead gives local owners autonomy in hiring employees and choosing confections that fit the community. He said he looks forward to hearing from the Evanston community about what they want from Kilwins in the downtown area.

Economic development manager Paul Zalmezak said since Kilwins would be classified as a type 2 restaurant, the shop would need to acquire a special use permit, requiring City Council approval. He said he does not expect Kilwins will have any problems with the approval process.

Ron Burnett, chief design officer at Kilwins, said the new shop will include an open kitchen. He said this will be the 131st store Kilwins renovates, and that he is very familiar with city codes and the processes necessary to open a shop.

Burnett said the Chicago area market has been receptive to Kilwins, and the chain, originally founded in Michigan, is starting to develop name recognition in the area. He said Evanston is exactly the type of place where the candy store thrives.

“This is an independently owned and operated store, like all of our stores,” Burnett said. “We license the Kilwins name and franchise and recipes and systems. … (The owners) are residents of the local market and they employ people in the local market.”

Burnett said Kilwins has about 1,600 recipes ranging from ice cream to “made-in-store items” such as caramel apples and fudge. However, he said each franchise chooses about 300 items tailored to the local community.
Zalmezak said he thought Kilwins would be a fun addition to downtown Evanston, especially in the summer. He described the shop as a “vacation town type of place,” and said it would fit well in the downtown area.

“Something that we do pretty well in Evanston (is) a nice balance of independent and national retailers,” Zalmezak said. “You get a national name and attraction, and you discover a shop or a restaurant that you’ve never seen before that’s independent. They thrive off each other.”