Baseball: Steal-happy Wildcats, Spartans to meet in series this weekend 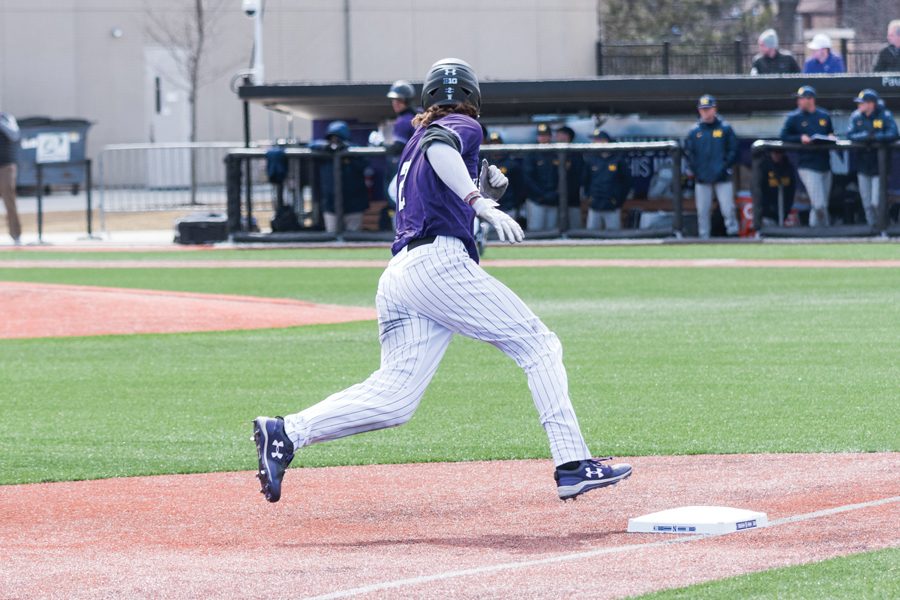 Jack Dunn races to second base. Dunn has been one of the Cats’ most improved players from last season and leads the team in stolen bases.

Northwestern and its upcoming weekend foe, Michigan State, hover near the bottom of the Big Ten in nearly every statistical category except one: stolen bases.

The Spartans (11-21, 3-5 Big Ten) and Wildcats (9-21, 1-11) are both aggressive on the basepaths, and rank No. 1 and 2 in the conference in stolen bases with 69 and 64 swipes, respectively. Both teams will certainly need the added help in their three-game series — which begins Friday in Evanston — to bring runners across home plate, as they both fall in the conference’s bottom three teams in runs scored.

Junior shortstop Jack Dunn and sophomore second basemen Alex Erro lead the Cats in bases poached, combining for 27 on the year. Each of them have only been caught stealing once.

Dunn’s breakout 2018 season has followed an offseason of competing with players from across the Big Ten in the Northwoods League, a summer league comprised of some of the country’s top college players.

The shortstop played on the Lakeshore (Wis.) Chinooks alongside Michigan State second basemen Royce Ando, an Ontario native who has played for the Canadian junior national team. Ando tore up NU’s pitching staff in a four-hit performance last season, but likely won’t be available for this weekend’s action as he has only appeared in one game in the past month.

Dunn said he has appreciated the opportunity to learn from other players about how they take at-bats and make plays.

“In the summer, I try to be a sponge and learn everything I can possibly from these other guys,” Dunn said. “A couple of the other guys were older than me, so they offered me some advice as well. It’s good to see them before games, but once you get between those lines, I just want to kick your ass.”

Friday’s likely pitching matchup will set up the Spartans’ Ethan Landon, a senior who boasts a 3.34 ERA but a dismal 1-5 record, against NU freshman Quinn Lavelle, who is reeling after two consecutive losses to conference foes. Lavelle saw his ERA go up an entire point after his last start, where in 3.1 innings of work against Indiana he gave up 6 earned runs.

Lavelle’s struggles last weekend mirrored those of the team’s pitching staff in a Tuesday defeat to Milwaukee, a performance in which eight pitchers combined to give up 6 runs on seven hits. Coach Spencer Allen said the team has shown moments of competitiveness, but needs to put a complete game together.

Freshman outfielder Casey O’Laughlin had his first hit since mid-March in the Milwaukee game, but said he wished the team could’ve gotten a win, which is “priority number one.” He said the team needs to “trust the process” and stick together moving forward.

“We just got to stay together,” O’Laughlin said. “We’re losing a lot of tight ball games right now.”