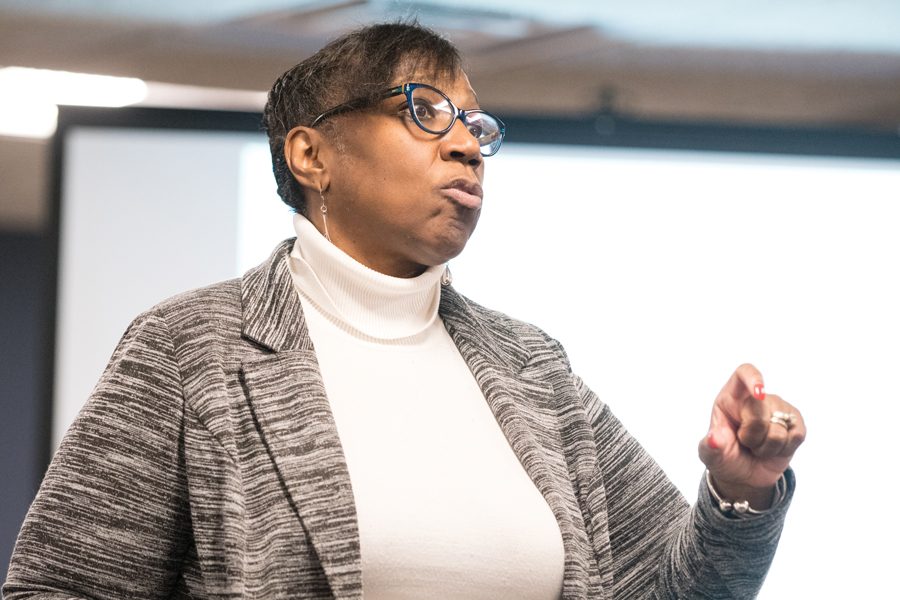 Evanston’s equity and empowerment coordinator Patricia Efiom speaks at a 5th Ward meeting on Thursday. Efiom spoke about equity’s role in the priority-based budgeting that Evanston will work on in preparation for the upcoming budget deficit.

Residents of the 5th Ward participated in the first priority-based budgeting workshop at a meeting Thursday in anticipation of the projected city budget deficit for fiscal year 2019.

City manager Wally Bobkiewicz projected the city’s deficit for the upcoming year to be about $3 million, according to the Chicago Tribune. To promote transparency in the budget-making process, Ald. Robin Rue Simmons (5th) said Thursday she used the workshop to get input on how residents feel about the many competing priorities of the city, information she will ultimately use in the decision-making process.

Rue Simmons said she asked for this workshop to happen during the meeting to prepare her residents for her handling of the upcoming deficit.

“We’re going to be best equipped in the city to think about these things and address them thoughtfully and responsibly,” Simmons said.

Ashley King, the city’s budget manager and interim CFO, said the budget-making process is starting about six months earlier than usual this year, and that the city is trying to get resident input on evaluating stated goals for the city. She said this will help in balancing the many competing priorities of the city, including the Robert Crown Center, street lighting options in the city and new capital projects.

The earlier timeline, King added, will give officials a better sense of direction and help to prioritize what is important to residents.

Evanston’s equity and empowerment coordinator Patricia Efiom said city staff have begun to evaluate budget goals this year through the lens of equity, which is something she said had not been as prevalent in the past.

Efiom showed residents how to rate city programs on their effectiveness in promoting equity, with the highest-scoring programs being designed for “historically underrepresented Evanston residents,” and lowest-scoring programs providing neither direct nor indirect benefits to those populations.

During the workshop, some residents voiced concerns over the priority-based budgeting exercise, which asked participants to rank a curated list of city programs on a scale of zero to four based on how well they helped achieve listed City Council goals.

Rue Simmons said it was difficult to choose the programs included in the list, but that the exercise ultimately sparked conversations about the deficit.

“We have some tough decisions to make … We have over a hundred areas that we need to address,” Simmons said. “Everyone has a different values system and different priorities, so I don’t think there’s going to be any easy way to do it, but we all have to start the process and work toward a solution that is best for all of our city.”

City staff will give a preliminary presentation on the budget at City Council on April 30.