Melanie Ilseman one of 19 teachers to receive tenure at ETHS 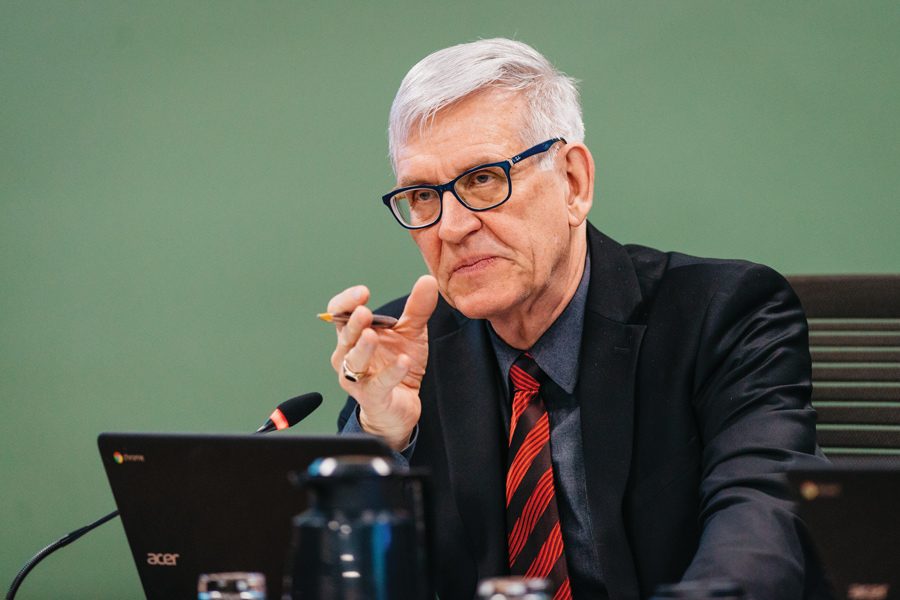 Eric Witherspoon presents at a District 202 board meeting. Nineteen teachers received tenure at the April 9 meeting.

During her four years at Evanston Township High School, geology and astronomy teacher Melanie Ilseman has worked to revamp the curriculum and learned to code on her own to teach her students. A week ago, she joined an unusually large group of staff members in receiving tenure at the school.

On April 9, 19 teachers received tenure at the ETHS/District 202 board meeting. District 202 superintendent Eric Witherspoon said the district usually has about 10 new tenured teachers a year, but this year it had a “very impressive number.”

“We’re very careful about how we screen and interview and select people to teach here,” Witherspoon said. “We put a lot of work on the front end, and then, when people join us, we’re equally as careful because we want tenure to really mean something. In my estimation, it’s a real honor to be invited to be tenured at ETHS.”

He said the tenure process at ETHS is particularly selective in looking for teachers that fit and contribute to the culture at the high school. He said tenure is a commitment a teacher makes to the district, and vice versa.

Ilseman said she felt “very supported” during her tenure process compared to her peers in other school districts. Though it was a lot of paperwork, she said she took the process seriously and tried to use it to her benefit as an opportunity to improve her teaching.

“(Tenure is) a great accomplishment and an honor,” Ilseman said. “I love ETHS, and it’s definitely a lot more supportive than other districts that I’ve taught at.”

Ilseman said teachers receiving tenure is a positive for students at ETHS because it allows teachers to be more creative and take risks. She emphasized that they continue to receive evaluations and trainings even after the tenure process ends.

At the District 202 board meeting, ETHS science department chair Terri Sowa-Imbo introduced Ilseman with a list of accomplishments and a handful of geology puns.

“She is dedicated and passionate about geoscience to her ‘core,’” Sowa-Imbo said. “Since she started teaching, she has become ‘boulder’ and revamped the entire geoscience and environment curriculum. … We ‘lava’ you.”

Sowa-Imbo highlighted Ilseman’s focus on project-based learning — having students execute open-ended labs, create their own Google websites and write TED talks to demonstrate their learning. She said Ilseman took it upon herself to learn to code and now leads the She is Code group at ETHS.

Ilseman said she likes to use humor and project-based learning to cultivate student interest in geology and astronomy. She said using a more open-ended science curriculum gives students autonomy and helps them be less anxious about science.

With the security of tenure, Ilseman said she hoped to get students outside more. She said she wants to take field trips outside of Evanston and out of the state to see geological phenomena and give students control of their learning.

“I listen to the students and respond to what they need,” Ilseman said. “I act things out. I’m very dramatic in my teaching style, which catches their attention and shows them that I’m interested in the subject matter and that I care about them too.”