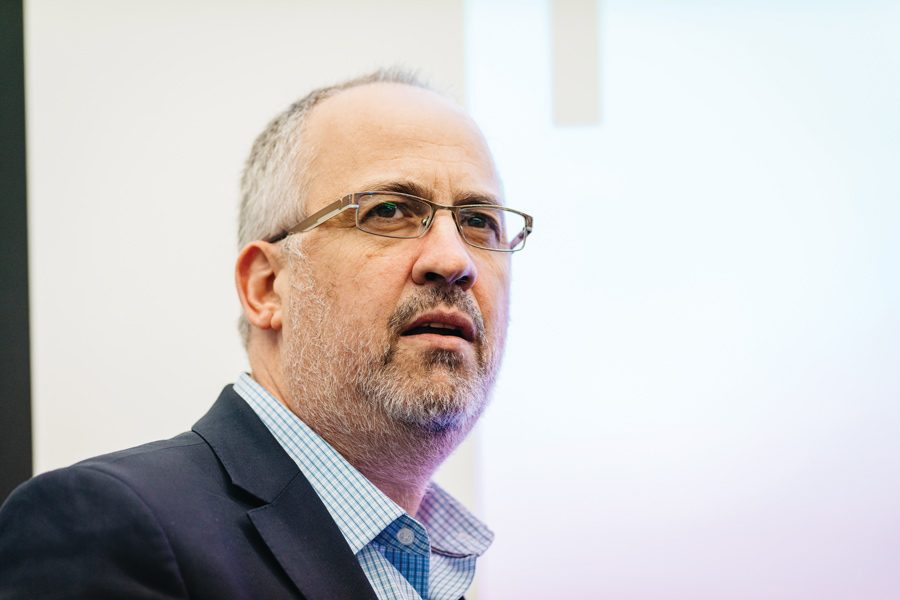 University of Chicago professor and journalist Guy Rolnik speaks at an Israel Week event Tuesday. Rolnik discussed the Israeli and American economies, emphasizing the importance of competition in markets.

Despite ongoing conflict in the region and high security spending, Israel’s economy is poised for more growth than the U.S. economy is, said Guy Rolnik (Kellogg ’98), a journalist and professor at University of Chicago.

He addressed about 20 students in Kresge Hall on Tuesday, as part of Northwestern’s Israel Week programming.

Rolnik, who founded the Israeli media organization TheMarker and is a deputy publisher of the daily newspaper Haaretz, is considered one of the country’s leading economic journalists. He is also a professor of strategic management at UChicago’s Booth School of Business.

“If you look at the last five or 10 years, (some economic) trends are positive in Israel,” Rolnik said. “In the United States, I don’t see a lot of changes in that direction.”

Weinberg and Bienen junior Robert Belson, who invited Rolnik to campus, said he was interested in bringing Rolnik’s perspective on Israel’s economy to NU.

Rolnik said at the event that Israel is often viewed as a “startup nation” due to its youth and is defined more by internal and regional conflicts than by the strength of its economy. But Rolnik stressed that Israel is “no different than most other countries” and should no longer be granted exemptions and waivers.

He compared the economies of Israel and the U.S., concluding that each country’s political system affects the way its industries are regulated and the prices for services in the country.

About a decade ago, Rolnik said, a handful of business tycoons controlled the Israeli market. Since then, however, he said the economy is now benefiting from healthy competition across industries, leading to lower prices.

In contrast, Rolnik said the U.S. market still relies on lobbyists who hold considerable influence over members of Congress. He said lobbyists work in the interests of large corporations, so the U.S. has comparatively high costs for health care and telecommunications services, among others.

Rolnik said as a result, only a few companies control the U.S. market for certain services, allowing prices to skyrocket. He used the example of cellular data plans — for which prices in the U.S. easily triple those in Israel — and attributed the prices to a lack of competition in the American market.

“It has to do with power,” Rolnik said. “Who has the power to determine the rules of the game? When you think about Israel … you tend to think of a lot of external factors. In reality, in a lot of areas, Israel looks much better than the U.S.”

Rolnik also pointed to the discrepancy in health care in the two countries. Though the U.S. is widely considered a pioneer in medical technologies, its health care system remains much more expensive than those of other developed nations. Additionally, U.S. life expectancy is significantly lower than Israel’s, Rolnik said.

Belson said he appreciated the ways in which Rolnik compared the two economies, saying he did it in “very relevant, tangible ways.”

“He showed there’s work to be done in a variety of industries here,” Belson said. “He posed some thoughtful yet challenging questions about things we take for granted in our daily lives.”

Medill freshman Daniel Konstantino, who helped plan parts of Israel Week and attended the event, said he appreciated Rolnik’s perspective, even though the hour-long event didn’t allow for much in-depth discussion.

“He stressed keeping an open mind when you’re looking at trends,” Konstantino said.