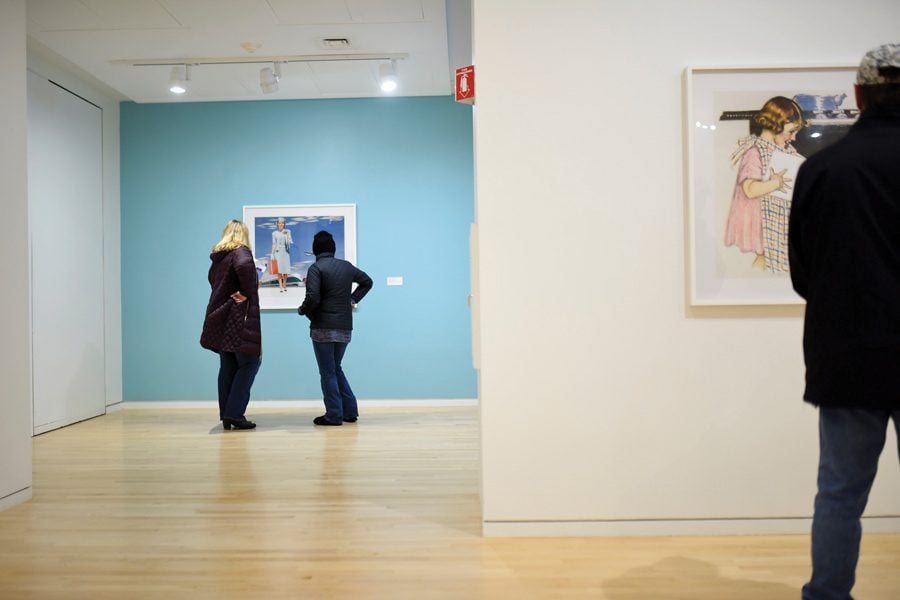 Gallery visitors look at a piece in “Hank Willis Thomas: Unbranded” at The Block Museum of Art. The exhibition opened Saturday and examines the portrayal of African Americans and white women in the media.

For artist Hank Willis Thomas, advertising has always been something of a “second language.”

“(Advertising) was something that I could decode and understand at an early age, and I was hyperaware of being communicated to through the images,” Thomas said. “I realized that the real message wasn’t through the text, but actually through the images.”

When a friend of Thomas’ came to him with an advertisement as a potential art piece, Thomas said his instinct was to strip away the text. The idea spawned two collections — “Unbranded: Reflections in Black by Corporate America” and “Unbranded: A Century of White Women.”

A selection of works from the two collections, titled “Hank Willis Thomas: Unbranded,” opened at the Block Museum of Art on Saturday. The exhibition, which examines the portrayal of African Americans and white women in the media, will be on display through Aug. 5.

Janet Dees, the Steven and Lisa Munster Tananbaum Curator of Modern and Contemporary Art, said this is the first time “significant selections” from the two “Unbranded” collections have been brought together in a single exhibition, so visitors can observe relationships within and across each series.

Unlike past displays of the “Unbranded” collections, works are arranged thematically rather than chronologically. Dees said she loosely organized the pieces according to themes such as gender roles, family dynamics, standards of beauty and exoticism.

Ivy Wilson, NU’s director of American Studies, said the exhibition is unique in that it is dually curated through the eyes of both Thomas and Dees. He said Thomas’ creation of the “Unbranded” collections was a curatorial process in itself, and Dees’ approach “animated and reinforced” Thomas’ vision.

Though she took a thematic approach in curating the show, Dees said she avoided explicitly categorizing the images because many are “multi-layered.”

“Some of the images are stereotypical, and some are operating in more surreptitious ways,” Dees said. “Having an image of a couple enjoying a day at the beach, it seems kind of innocuous, but then you think about things like, ‘Well, she’s been at the beach all day but her makeup and hair is perfect.’”

The titles of the works are inspired by the text and slogans of the advertisements, Thomas said. For example, “It’s done with a simple push of the hand” depicts a mother teaching her daughter how to use a vacuum. “Farewell Uncle Tom” portrays a African American couple dressed in 1970s fashion.

Thomas said he hopes the subversive titles will provoke new questions about what is being sold.

“I realized that ads are never really about the product,” Thomas said. “It’s about what you get people to buy into through the language and the images and the stories that you tell.”

Thomas commented on the constantly changing nature of advertising and media in general. There are fewer iconic print ads nowadays, he said, but consumers likely view “thousands of ads a day” without even realizing it.

The “Unbranded” collection shows not only the evolution of the advertising industry, but also reflects how cultural norms and representations have changed over time, Thomas said.

“(Advertisements) really act as a time capsule,” Thomas said. “I believe you can learn just as much about culture by looking at the ads it produces as you could by reading a whole book or watching a whole movie about that time.”