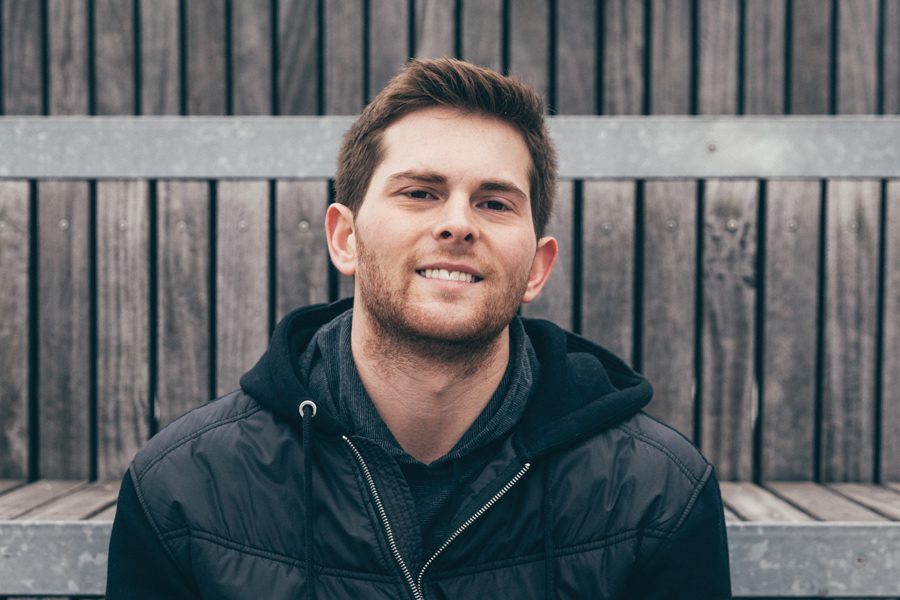 Jordan Gross. The Northwestern alumnus published a book that has hovered near the top of Amazon’s bestseller list in the teen health category.

Northwestern alumnus Jordan Gross grew up with a “quadfecta” of misfortune: He was overweight, cross-eyed, had hair long enough to get confused for a girl and a last name that made kids go “ew” before they had even met him.

Gross (Weinberg ’16, Kellogg ’17) had to quickly get comfortable with his identity — which he did through athletics and a sense of humor — and said he wanted to use his experience to help others feel satisfied with themselves as well. So he quit his corporate job and took a risk, penning the self-help book “Getting COMFY: Your Morning Guide to Daily Happiness” — currently the No. 4 Amazon bestseller in the teen health category.

“It’s all about just how you frame it and the perspective you go along with things,” Gross said. “It’s something that could’ve been crushing to my mentality, but for me it was actually more of a springboard to understand … it is time to do a little bit better so that I’m able to be seen for who I am rather than for what my qualities exude.”

The book, released in late January, centers on what Gross calls the “COMFY” philosophy, an acronym that stands for calm, openness, movement, funny and you, tenets he explores in depth. Gross calls the philosophy an “IDUH” instead of an idea, because it is simple and accessible, and something readers may have already thought about. The point, he said, is to promote implementable strategies, not “grandiose self-help schemes.”

Gross majored in economics and said he never thought writing would be part of his future, but began listening to podcasts and reading books from influential figures toward the end of his college years. He then started working on his own book because he said he couldn’t wait for the ideal opportunity to do it.

“Why would I wait for the perfect alignment of the stars or some sort of tragedy to occur for me to start sharing my story with others and hopefully influencing the lives of millions?” Gross said.

When setting his expectations for the book’s release, Gross said he hoped to have five people respond to the book, but has received reactions from thousands.

Ariel Radow, the book’s publicist, said she became involved after the manuscript was written but before the book launched, and she helped Gross grow his brand. She said the pair focused on building awareness of the book on social media, resulting in more than 2,000 followers on the book’s Instagram page in a matter of months.

Radow said she decided to join the project because she was inspired by Gross’s leap of faith in leaving his job to follow his passion.

Jake Freeman, who contributed a subsection within the “Movement” section of the book, has known Gross since the two played soccer together in grade school. He said the two still play sports and go to the gym.

On a personal level, Freeman said he and Gross clicked as friends because Gross cares about other people and makes individuals feel important.

“‘Getting COMFY’ as a whole is doing so well because of the type of guy that (Gross) is,” Freeman said. “He’s such a selfless person, and he’s so supportive whether it’s with his family or his friends. He absolutely deserves this type of success.”

Correction: Due to an editing error, a previous version of this story misstated Jordan Gross’ name in the photo caption. The Daily regrets the error.