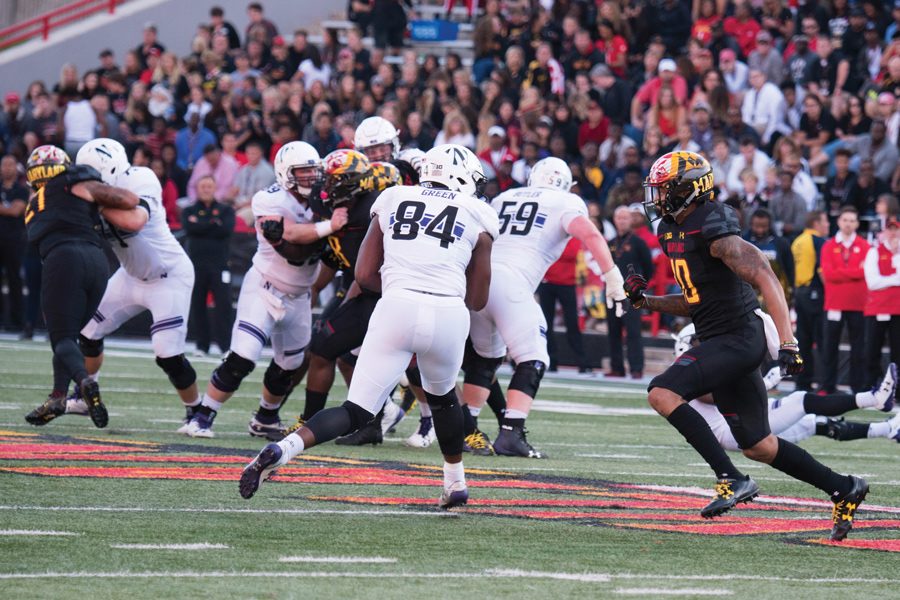 Cam Green catches a pass during the Oct. 14 game at Maryland. Green hauled in 20 catches during the 2017 season but is in line to take over a bigger role in 2018.

Cam Green had always been a receiver.

The now-rising junior was taught by his father, a former Chicago Bears running back, how to catch a football at age 2. From that point on, Green excelled throughout grade school at the position, earned scholarship offers from six Big Ten programs and enrolled at Northwestern in 2015.

But then, in the words of coach Pat Fitzgerald, “mother nature took over and he just kept getting bigger.”

Now, Green is the frontrunner to replace graduating Garrett Dickerson as the Wildcats’ starting superback — a tight end-esque position that relies as much on blocking as pass-catching.

“Cam is trying to work real hard on becoming a better blocker on the edge,” superbacks coach Bob Heffner said after Saturday’s final spring practice. “He’s stronger and heavier than he was a year ago; he’s still fighting to get a little bit more.”

When Dickerson was battling through an injury during the middle of the 2017 season, Green saw his first game action, reeling in six catches for 49 yards on Oct. 14 at Maryland and six receptions for 76 yards and a score on Oct. 28 against Michigan State. He finished the year seventh on the team with 20 catches for 170 yards and two touchdowns.

After the breakout performance against the Terrapins, Fitzgerald greeted Green with a “big ol’ hug” in the locker room, the coach told reporters in Maryland. Following the contest against the Spartans, a statement win in triple overtime aided by a Green touchdown in the first overtime period, Fitzgerald named Green NU’s “Offensive Playmaker of the Week.”

Once Dickerson returned to full health, Green’s playing time dwindled considerably and he recorded no statistics in any of the Cats’ final three games. The Buffalo Grove native nevertheless described his brief foray into the limelight as an invaluable learning experience.

“It really gave me a taste of what it’s like to be on the field all the time, going up against some of the best defensive ends and linebackers in the Big Ten,” Green said. “It was humbling to go out on the field and get my butt kicked sometimes, because you’ve got to learn that lesson, learn from your failures.”

Now practicing with the first-team offense during spring camp, Green is getting a daily dose of facing one of the conference’s best: he’s tasked with blocking junior-to-be defensive lineman Joe Gaziano during drills.

That challenging matchup, combined with the 6-foot-3, 230-pound superback’s continual efforts to gain weight — which he described as his biggest offseason focus — is helping Green improve his edge blocking prowess to match his zone and open-field blocking, which Heffner said are relative strengths in his game.

Nothing is yet set in stone. Heffner said the coaching staff is “experimenting” to see if they’ll need to make some schematic or positional role changes in the fall to “help him a little bit.” There are also seven other superbacks — including rising senior blocking specialist James Prather and highly touted recruit Trey Pugh, now a rising sophomore — in the mix for the job, and all seven weigh more than Green.

After nearly two decades as an aspiring receiver, though, Green said he’s now mentally seeking to “move forward to become a full-go superback,” embracing Fitzgerald and Heffner’s teachings about how to successfully do that.

“Coach (Heffner) was really getting on me last year to understand what I was doing wrong,” Green said. “He’s coached me up to where I’m starting to understand and we’re getting on the same page with everything.”