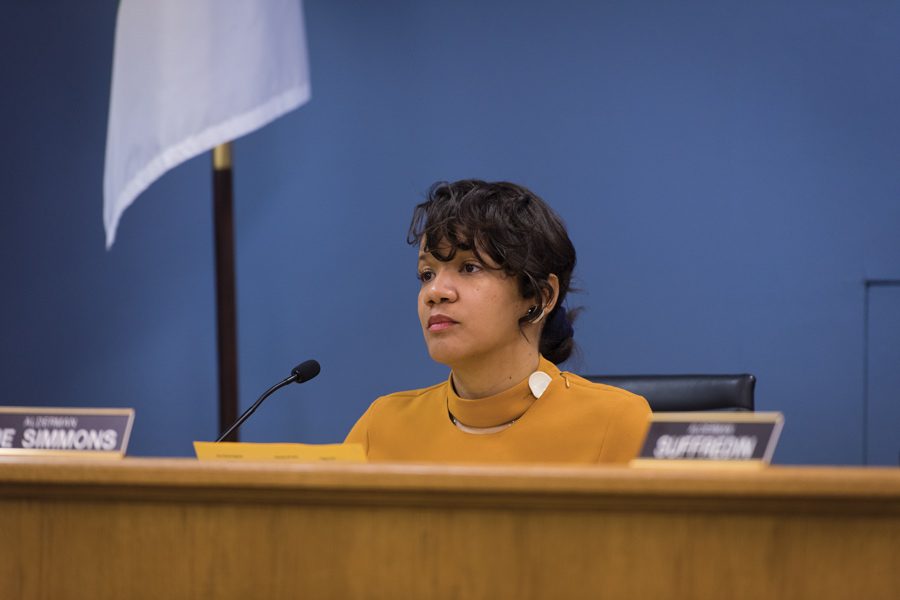 Ald. Robin Rue Simmons (5th) looks on at a council meeting. Rue Simmons said she has received complaints from residents who had not gotten callbacks from Open Communities.

The city will consider entering into a new agreement with Open Communities — a nonprofit that provides landlord-tenant services to Evanston residents — after concerns about staff changes and delayed response times.

At an April 10 City Council meeting, Evanston housing policy and planning analyst Savannah Clement said the nonprofit’s funding application was supposed to be on the Housing and Homelessness Commission’s agenda, but was held due to concerns about staffing and its ability to implement Evanston’s Landlord-Tenant Program.

Aldermen also said they had received feedback from residents saying their calls regarding concerns about mold in apartments and landlords illegally evicting tenants were not being returned. Ald. Robin Rue Simmons (5th) told The Daily residents had expressed to her that they were either not receiving callbacks or useful assistance.

“That’s unfortunate because Open Communities for decades has been a resource on the North Shore,” Rue Simmons said. “They’re notable for their commitment for affordable housing, and it’s clear there’s been some breakdown in operations and I’m confident that they will address it.”

Open Communities has had an interim executive director since David Luna stepped down in March after serving in the role for two years. Luna had taken over for Gail Schechter, who was the organization’s only full-time director for 22 years.

Interim executive director Kelly Kleiman said while there has been some staff turnover, that was not a factor in the issues with response time. She said they did not have any phone service, but resolved the problem on March 20. Rue Simmons said she has not received any more complaints in the last month.

Evanston housing and grants division manager Sarah Flax said the city is in discussions with Open Communities about addressing the level of services Evanston residents need. She said at the council meeting that the city can request a specific time period for responses in the new agreement.

“We are also assessing the level of services we need and just trying to get a better handle,” Flax told The Daily. “In any situation, you can have people who don’t get services sometimes or say they’re not responded to, but that doesn’t necessarily quantify the problem at a very specific rate.”

Evanston first partnered with Open Communities to provide landlord-tenant services in 2011, according to city documents. The city most recently renewed the Landlord-Tenant Program last year, approving the continuation of a $40,500 grant that was funded through the Affordable Housing Fund.

Kleiman told The Daily that because aldermen decided to not consider the renewal of the grant for this year, the agreement will be changed to a contract for services the nonprofit provides, as Open Communities currently receives all housing-related calls from Evanston’s 311 number.

She added that Open Communities will bid on the contract, but there is no guarantee that they will make an agreement with the city.

“I don’t think there’s another agency that is capable of doing what we do, but that’s obviously up to the city when it looks at our proposal and maybe proposals from other agencies,” Kleiman said. “We certainly hope to serve Evanston.”