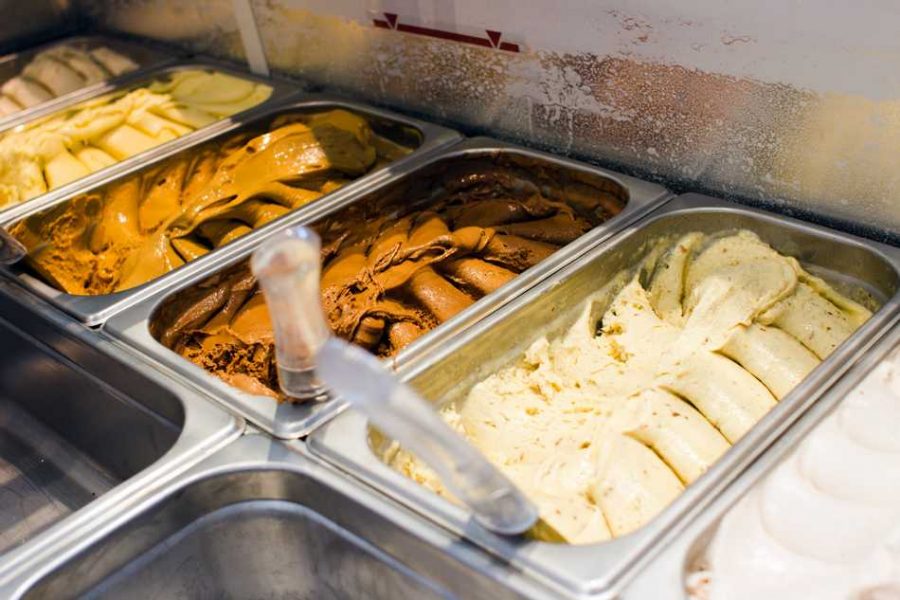 FRÍO Gelato serves a range of flavors made from scratch in Evanston. The shop saw an increase in business this winter after moving from 517 Dempster St. to 1301 Chicago Ave.

Residents traded in hot chocolate for gelato this winter as FRÍO Gelato saw more sales this season than in the summer months.

The Evanston store recently moved locations from 517 Dempster St. to 1301 Chicago Ave., on the corner of the same street. Since moving to the new location in January, co-owner Karla Koziura said the gelateria has seen an unprecedented uptick in business.

“We’re selling gelato in the middle of February on a Monday afternoon,” she said. “We’ve got lines out the door on the weekends. … It’s incredible.”

Koziura and her husband, Sebastián, founded the Evanston-based gelato business in 2013, when they operated out of their production kitchen. After one year, they moved FRÍO Gelato to the Dempster Street location, where it ran until 2018. Last year, they also opened a second location on North Southport Avenue in Chicago.

Karla attributes the boost in business at least partially to the new location on the street corner, which is both more spacious and more visible.

“I can’t tell you how many people come into the gelato store now and say, ‘I never knew you were here,’” she said. “We were just literally two doors over to the east but people didn’t see us.”

Sebastián added that annual sales had already been steadily increasing as FRÍO Gelato built up local clientele, but agreed this year’s spike was most likely due to increased visibility.

Karla said FRÍO Gelato is defined by the “three A’s:” Argentine, artisanal and allergen-friendly. In Argentina, where her husband grew up, you can find gelato on every street corner, she said, adding that his childhood inspired their business in Evanston.

“In Argentina, getting gelato is kind of the thing to do,” Karla said. “It kind of brings the community together. … We wanted to replicate that feeling here.”

All of FRÍO Gelato’s products are made from scratch in Evanston, Karla said. She added that the business is also focused on giving back to the community, and said they often participate in local charity events and donate to a scholarship organization for university students in Argentina.

Weinberg freshman Saul Osorio, who is a frequent customer at FRÍO Gelato, said the wide variety of flavors the gelateria offers makes it stand out from other ice cream shops.

“Some of the gelatos I haven’t even heard of, and they’re all really good,” he said. “When I go to FRÍO (Gelato), I always try something different, because I’m pretty sure I’ll like it.”

Considering the store’s new visibility and the year’s off-season success, FRÍO Gelato is making some structural changes going into the summer. Karla said they will double the number of staffers as they head into warmer weather, and will specifically prepare employees to handle an expected increase in business.

“The goal is to open probably six or seven in the Chicagoland area,” he said. “That would be my goal for the next five years.”