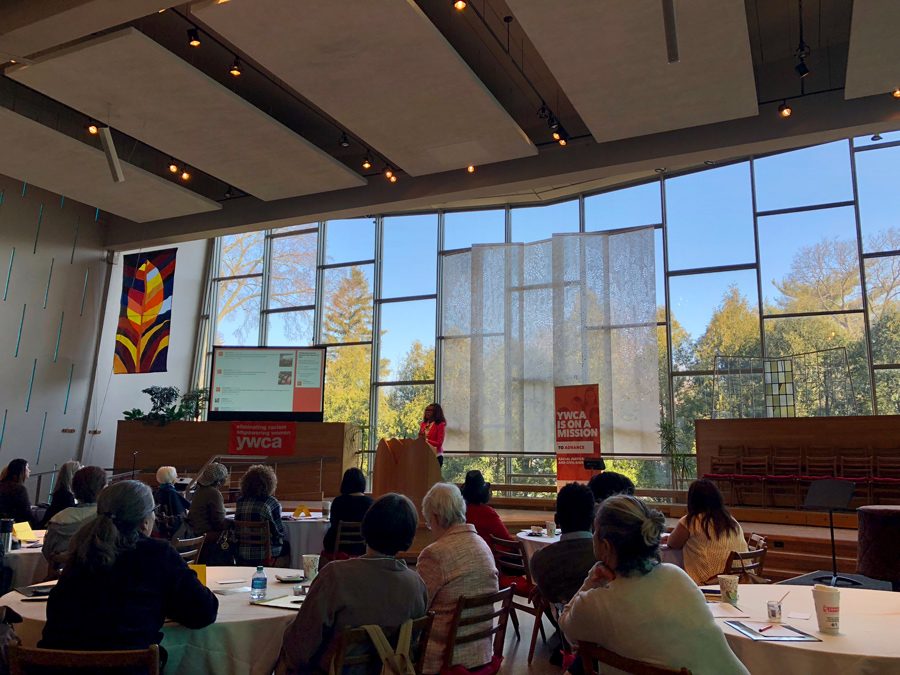 Following the shooting death of Lucille Barnes in 2015, Tamar Manasseh knew she could no longer be complacent.

She said she knew she had to do do something to “fix the scourge of gun violence that grips Chicago,” so she set up lawn chairs and a barbeque on the corner of 75th Street and Stewart Avenue — the same corner where Barnes was killed. From that street corner, Manasseh founded Mothers/Men Against Senseless Killings to put eyes on the streets in order to replace violence and crime with meaningful community.

“I am not an activist, I am not a community organizer, I am somebody’s mother. That’s all that I am,” Manasseh said Thursday at Evanston’s third annual Racial Justice Summit.

The summit was hosted by the Evanston/North Shore YWCA at the Unitarian Church of Evanston. Manasseh was the keynote speaker at the event, and spoke about the power that a visible community can have in preventing violence.

She said that the census tract that MASK serves has seen the sharpest decline in violent crime in Chicago over the past three years.

“We have the sharpest decline without any additional resources being brought to the community,” she said. “(The kids) don’t feel the world the way that they used to. Their world is a lot bigger now than it used to be.”

She said she didn’t feel afraid to sit on a corner that had previously been affected by gun violence because “mothers trump guns every day of the week.”

Manasseh said MASK’s next step was to build “pocket community centers” on vacant lots in the Englewood neighborhood of Chicago. She said multiple smaller community centers will better serve residents because gang boundaries restrict children from traveling to certain parts of the neighborhood.

However, she said, a “bomb” was dropped on the Englewood community in February when the Chicago Board of Education announced it would close four neighborhood high schools.

“I found myself convincing babies to stay in school,” she said. “That is terrifying to me, and I think it should be frightening to us all. We’re all connected in this city.”

Because of the school closures, she said MASK will have to change the plan for the community centers and turn them into “makeshift schools.”

“YWCA has a long history of being a social justice organization whose mission is to eliminate racism and empower women,” she said. “More and more of our constituents were feeling the need to move beyond what they’ve learned or heard or experienced personally to taking action to really start to change the systems that have been set up in ways that are oppressive.”

Dilnaz Waraich, another speaker at the summit, said Evanston residents need to join together and recognize that “each one of us has a voice.”

Manasseh said she thought it was important to speak in Evanston in order to make local residents understand that violence does not just affect other communities.

“People in Evanston and places like it don’t believe that it’s an important talk to have,” she said. “People in nicer areas think that they’re somehow immune to what happens in the not-so-nice areas. They forget that we are all still connected.”