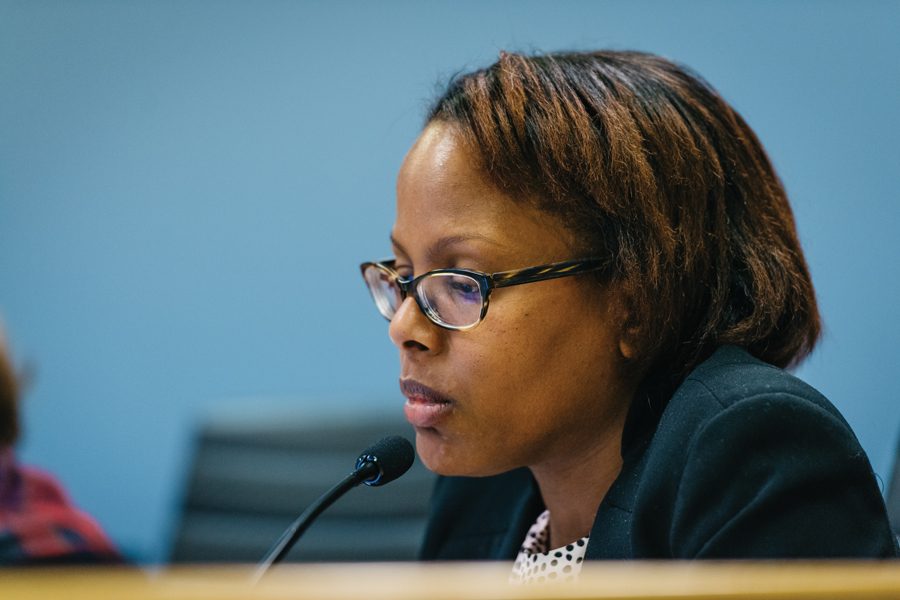 Ald. Cicely Fleming (9th) speaks at a City Council meeting Monday. Fleming raised concerns about a grant given to Mudlark Theater to diversify its staff.

City Council approved a $25,000 grant to Mudlark Theater on Monday to diversify the theater’s administrative staff despite concerns from some aldermen that the city should not pay for the staffing of organizations.

Aldermen voted 7-2 to approve the grant, which was part of the Economic Development Committee’s Equity in the Arts hiring program. In October 2016, City Council approved the program, which has up to $50,000 of funds to allocate annually and requires organizations that receive the money to hire “local minority residents” to administrative or professional roles, according to city documents.

Ald. Cicely Fleming (9th) and Ald. Tom Suffredin (6th) did not support the funding, saying the city should not need to pay organizations to diversify their staff.

Fleming said although agencies do need to think about diversity when hiring employees, they should do so without receiving funding from Evanston.

“I don’t think we want to be in the business of paying for staffing just so agencies could diversify,” Fleming said. “I want the person who’s in the position to be there because they’re looked at as a benefit to the agency, not because the agency received money from the city to hire someone of color.”

Evanston cultural arts coordinator Jennifer Lasik said the hiring program was developed as a way to both provide money to nonprofits that focus on the arts and diversify their staff. She said when Economic Development Committee members initially began to talk to leaders at organizations like Mudlark Theater about diversity, they found many were thinking in terms of audience diversity, not their own staff.

Lasik added that the arts organizations in Evanston often work on a tight budget and are “predominately white.” She said it was important that the nonprofits hire someone diverse for an administrative role because promoting equity has to start from the “top-down.”

“We wanted to find a way to kill two birds with one stone,” Lasik said. “We want to really encourage diversity and help get someone in the decision-making to do a paradigm shift so that the arts embrace what we value here.”

Any arts nonprofit in Evanston was able to apply for the grant, but Lasik said city staff only accepted organizations that have the capacity and financial stability to keep the employee even after it no longer has the grant money. The program provides the funding for one year with the option to renew for another year.

According to city documents, Mudlark Theater met the program’s requirements for having a “successful track record” and the ability to provide mentorship and leadership development to employees.

Still, Ald. Robin Rue Simmons (5th) said the city should also consider giving grants to minority theater companies to build capacity “instead of the other way around.”

Fleming said she wants to challenge the city to start thinking about equity in a more meaningful way.

“I’m going to push us when we think about equity — it’s not just throwing some money at something or using the term to push our own agenda,” Fleming said. “In the city overall we need to do a deeper dive into how we’re looking at equity, what the importance of it is and how we’re implementing it throughout the city.”