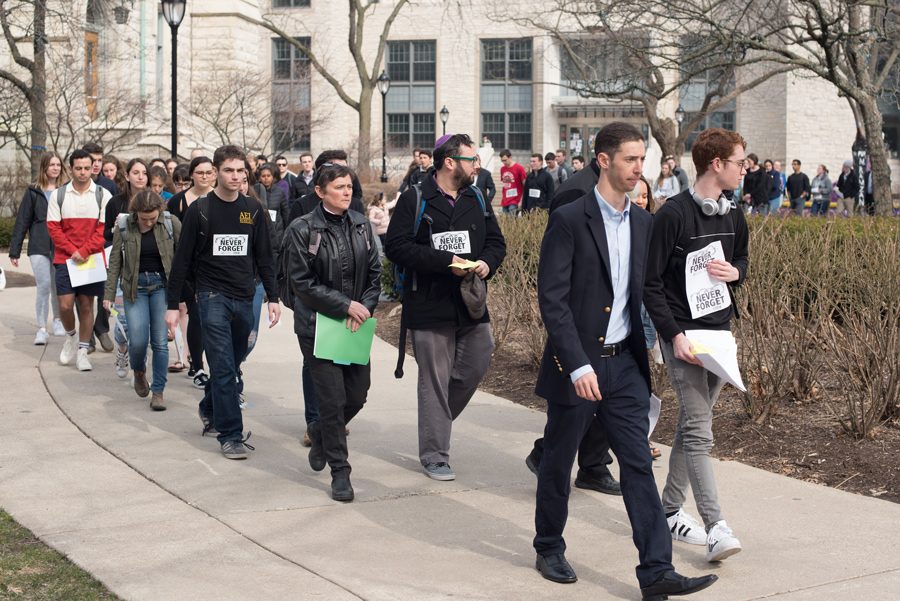 Students walk through campus for the annual Walk to Remember. The Thursday event was hosted by Alpha Epsilon Pi in honor of Holocaust Remembrance Day.

About 50 students and community members gathered at The Rock on Thursday afternoon to participate in a walk and memorial for Holocaust Remembrance Day.

The annual Walk to Remember, which is hosted by Alpha Epsilon Pi chapters around the world, was the final event in a week of programming led by Northwestern Hillel. The week’s events included a Sunday trip to the Illinois Holocaust Museum and a guided discussion Wednesday with a Holocaust survivor, Hillel executive director Michael Simon said.

The Walk to Remember began with a silent walk north on Sheridan Road and led back to The Rock for a memorial service. Participants were asked to wear black in commemoration of those who died in the Holocaust.

“It was beautiful to look back and see a column of students and administrators in black, all with a common goal to remember the Holocaust,” AEPi president Joe Charney said. “As a Jewish fraternity, it’s so important that (AEPi) take the lead in remembering one of the most tragic events in the history of mankind.”

Charney, a Medill sophomore, said it was also important for him to be there personally, having visited several concentration camp sites in high school and seen “firsthand what my people had been through.”

Simon said the walk was important because it offered a way to personally connect with “something that is so overwhelming,” adding that the number of those killed in the Holocaust is “beyond comprehension.”

“The walk — the actual physical act — puts you, even for a moment, into a space of contemplation and reflection, and to do that in community is a very powerful thing,” Simon said. “To take a moment out of just your regular day, I think, is an important way to commemorate.”

The memorial following the walk featured several speakers, including Sarah Cushman, director of the Holocaust Educational Foundation of Northwestern; Hillel Campus Rabbi Brandon Bernstein; and Tannenbaum Chabad House Rabbi Dov Hillel Klein. Simon completed the service by reading out the names of Holocaust victims and leading participants in a prayer.

Speakers stressed the importance of preventing future genocide and organizers handed out stickers with the phrase “never again” on them. Cushman referenced a study published Thursday from the Conference on Jewish Material Claims Against Germany that found that 58 percent of Americans believe something like the Holocaust could happen again.

The study also found that 49 percent of millennials, defined in the survey as those between the ages of 18 and 35, could not name a single concentration camp and that 70 percent of all U.S. adults believe that fewer people care about the Holocaust today as much as they used to.

However, Weinberg freshman Charlotte Masters, who is involved with NU Hillel and helped plan Thursday’s event, said an important motto for her in conversations about the Holocaust is “the past is the present.”

“Not only can you not forget, you have to realize that some of the things that led to the Holocaust happening are still very much a part of our world today,” Masters said. “Learning what can happen from those things and how to prevent them and how to use your voice to stick up for other people is really important.”