Medill Dean Brad Hamm to step down in June 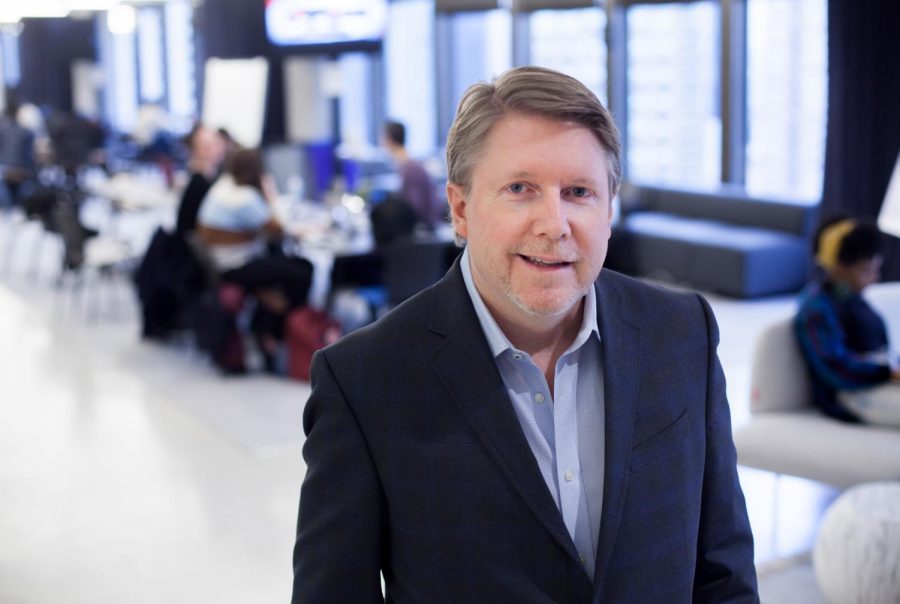 Medill Dean Brad Hamm. On Wednesday, Hamm announced he will step down from his position at the end of the academic year.

Medill Dean Brad Hamm announced Wednesday that he will step down from his position at the end of this academic year.

Northwestern’s Board of Trustees was made aware of his decision Tuesday, Hamm said, and professors were notified Wednesday. Hamm told The Daily he is going to take a one-year sabbatical and then return to Northwestern as a tenured journalism professor. He plans to split his time between the United States and Japan with his wife and 7-year-old son.

Hamm, who became the school’s dean in 2012 after serving as dean of Indiana University’s School of Journalism for seven years, said leading Medill has “been amazing.” Under his leadership, the school started Medill Global and Medill Explores, a series of classes that send undergraduate and graduate students abroad for a week to report on different topics. The school also opened a San Francisco campus in collaboration with the McCormick School of Engineering.

“I’m thrilled with the kinds of programs we started and especially the travel programs because I think those just changed people’s lives,” Hamm said. “Student experiences were a crucial part of the last six years, plus the funding possible for students. I think that’s been the highlight for me.”

The announcement comes a few months after Alec Klein, director of the Medill Justice Project, was accused of bullying and harassment by a group of women known as “Medill Me Too.” It also comes nearly a year after Medill announced it would not reapply for accreditation under the Accrediting Council on Education in Journalism and Mass Communications, an international organization that evaluates journalism programs in colleges and universities.

Hamm told The Daily these two issues “did not play a factor in any way” in his decision to step down from the role.

“As a dean, you always have big things to deal with and so, regardless of whether you go this year or next year, there will always be challenges and opportunities,” he said. “It’s not that those things aren’t important, (but) as dean, when you look at timing, you look at what you’ve promised, what your plans are and what your professional and personal priorities are.”

In a statement, Provost Jonathan Holloway said Hamm has “done a remarkable job of guiding Medill at a time of significant change in the fields of journalism, marketing and communications.”

“He has helped lead the transformation of Medill, while maintaining the school’s historic strengths,” Holloway said.

According to the statement, Hamm also raised nearly $9 million in “commitments for financial aid to create a ‘need-blind’ model at Medill” so students — regardless of family income — can participate in internships as well as the school’s reporting programs in Washington, D.C., San Francisco and abroad.

Christine Brennan (Medill ’80, ’81), a member of Northwestern’s Board of Trustees and a professor of practice at Medill, told The Daily she was sorry to see Hamm leave his role as dean but is “thrilled” that he will come back as a professor. Brennan said she was able to see Hamm’s impact on Medill’s sports and global programs, particularly with the inclusion of Medill students in the press rooms of the Olympic Games.

Hamm, she said, “opened the world to Medill and Medill to the world.”

“I don’t think you can overstate the impact of that for Medill now and for the future and for Northwestern,” she said.

Medill Prof. J.A. Adande (Medill ‘92), director of the school’s sports journalism program, said Hamm’s departure is not something he wanted to see, but the most important thing is that Hamm is “happy and peaceful with his decision.”

Adande, who was the faculty lead for a trip that took five graduate Medill students to the 2018 Winter Olympics, said Hamm is the reason why he came back to Medill.

“He’s the reason I’m here, both from his recruitment of me and … because I believed in his vision of Medill,” he said.

Adande said he has not yet spoken to fellow Medill faculty members about the situation.

“There’s always uncertainty that comes when you don’t know who the next leader will be,” he said. “But I think above all, first and foremost, Medill and the strength of Medill will continue regardless of leadership positions.”

In a statement, Rance Crain (Medill ’60), former president of Crain Communications and member of Medill’s board of advisers, said Hamm’s “candor and collaborative efforts” set him apart from other deans he has worked with during his 30 years on the board.

“I always had the feeling that he appreciates and values our opinions, and that we and Dean Hamm are on the same page when it comes to doing what’s best for Medill,” he said.

Holloway said in his statement that he will oversee an international search for Hamm’s successor.

This story was updated at 1:15 p.m. with additional information from Hamm and comments from Board of Trustees member Christine Brennan, Medill Prof. J.A. Adande and Medill Board of Advisers member Rance Crain.