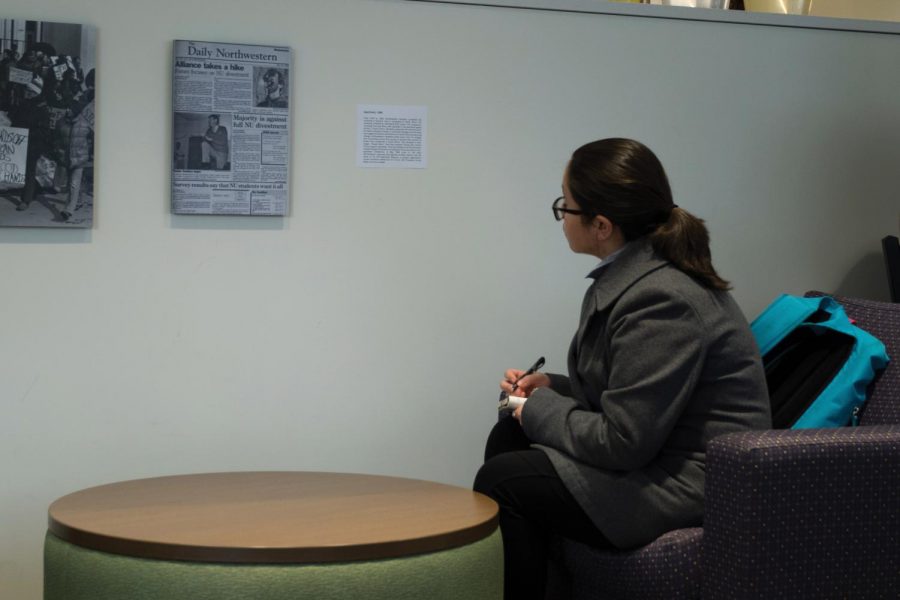 A visitor looks at an aspect of the Shepard Engagement Center’s new student activism exhibit. The gallery will run until at least Reading Week and highlights both historical and contemporary movements.

Melissa Foster (Bienen ’96, ’01) was a sophomore at Northwestern when University Police knocked a black student down while he was traveling home and handcuffed him for taking a bike that he owned. The incident prompted an “outcry” from students, the Communication lecturer said, and she participated in a campus protest asking for police accountability, support for the Black House and several other demands.

“If you care about something, you can make a difference,” said Foster, who is a Shepard Hall and 1838 Chicago Faculty-in-Residence. “It seems like one person can’t and we’re all too busy but even the smallest things (matter).”

Conveying that message is a goal of Shepard Hall’s new educational exhibit, Foster said at its opening reception Monday, which drew around 35 attendees. Newspaper archives, black-and-white photos and reproductions of social media posts line the walls of the Shepard Engagement Center to bridge historical student activism at NU with modern-day movements.

The educational gallery is a joint initiative between the Office of Residential Academic Initiatives, University Archives, other campus departments and in-area Faculty-in-Residence.

Charla Wilson, the University archivist for the black experience, told The Daily she hopes the exhibit can serve as an opportunity to honor past campus activists. While she said it’s easy to “take for granted” the significant impacts students have made on NU, the gallery is meant to directly recognize that.

“An aspect that this exhibit highlights that I find remarkable is that academic programs such as black, Asian-American, Latino, women and gender studies were not enhancements that were resulting from the top administrators down to the students,” Wilson said. “They were actually the results of students fighting for these programs.”

The exhibit features media from the Bursar’s Office Takeover, hunger strike for Asian-American Studies and other past activism movements at NU, director of Residential Academic Initiatives Brad Zakarin told The Daily. But more recent movements were also intentionally included, he said.

In the process of curating the exhibit, Zakarin said exploring both what constituted campus activism historically and “what sorts of shapes (it is) taking in the social media age” was essential. One feature of the gallery, an online quiz created last year to identify black actors and actresses in the theater community, was a “perfect example” of how modern activism can take unconventional forms, he said.

The exhibit will run until at least the beginning of Reading Week, Zakarin said, but depending on students’ responses, it could be in place for longer or move into a different residential space or campus building.

McCormick freshman Claudia Kalisa said she attended the exhibit’s reception to learn more about student protests on campus. After looking throughout the gallery, she said the ways past activism can impact the present was evident.

“We’re here and we have the Black House … and it’s a more diverse community than I imagine it was back then,” Kalisa said. “But I feel like it’s important for people to know it hasn’t always been like this, that there were people that had to do something for us to have what we have now. And if possible, we could do something better for other people that will come after us.”