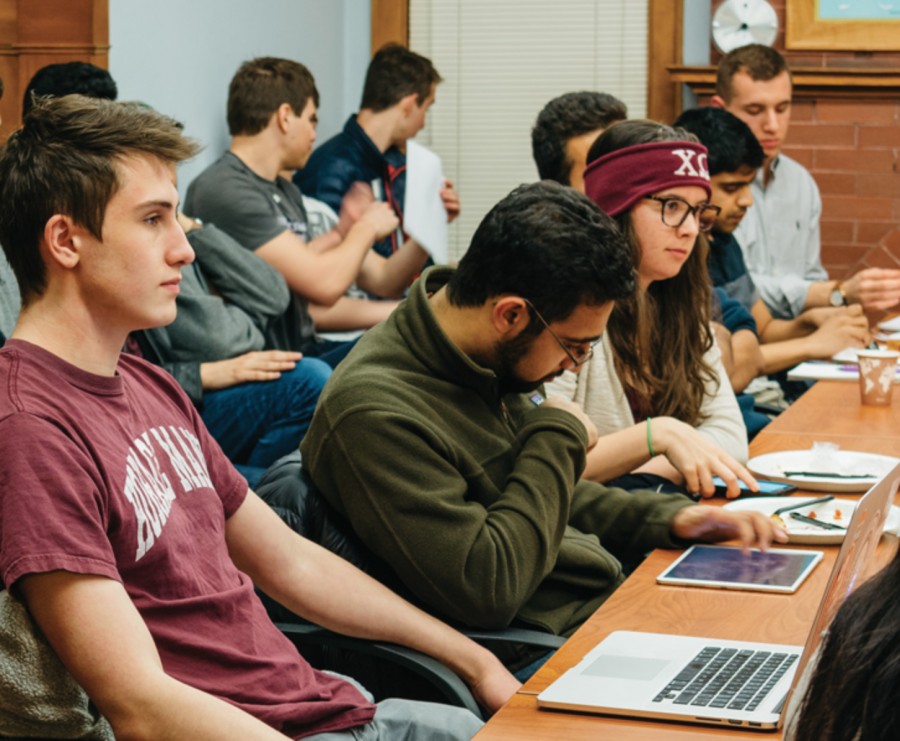 Students debate a resolution whether to repeal the Second Amendment at a Political Union debate. Members of the group voted against the resolution by a margin of 16-15.

In its first debate of Spring Quarter, Northwestern Political Union voted against a mock resolution to repeal the Second Amendment, by a margin of 16 to 15.

Political Union hosted the debate after last month’s March for Our Lives, a national, student-led demonstration in support of gun control legislation in response to the Marjory Stoneman Douglas High School shooting in February, said Dominic Bayer, director of events of Political Union.

Bayer, a Weinberg sophomore, and Edmund Bannister, party leader of the center, opened the debate before the crowd of 50 attendees also expressed their views on the issue.

Bannister, a former Daily staffer, called for a repeal in an opening statement, arguing the view of gun ownership as an intrinsic constitutional right has contributed to the “vast spasm of homicidal violence” in the country.

“These deaths aren’t because people in the United States are homicidal maniacs,” the Weinberg junior said. “They are a direct product of the fact that we cannot create pragmatic legislation until the Second Amendment has been removed.”

Bayer, the opening speaker for the pro-Second Amendment side, said while he mourns the unnecessary and tragic loss of life from deadly shootings, depriving citizens of the “fundamental right to self-defense” is not the right solution.

If the amendment was to be repealed, Bayer said, “it would be naive and presumptuous” to believe that those who obtain guns illegally would cooperate with new laws.

Some student attendees against repeal also argued that if the government becomes undemocratic in the future, citizens must be free to form a militia for security.

Bannister said many of the con arguments seemed to be based on hypothetical situations, and he claimed a student on the opposing side cited an “outrageously magnified” statistic from the National Association of Gun Rights, a partisan organization.

Attendees also brought up the possibility that appealing the Second Amendment may not decrease the number of illegally-owned guns in the country, to which Bannister countered with more information on illegal gun-related concerns.

Weinberg sophomore and Political Union executive member Ian Odland advised the audience to take evidence offered on both sides with “a grain of salt.”

After the debate, Bayer told The Daily he believes it is important for the whole campus to engage with Political Union debates.

“Northwestern has the potential to be a bubble, an echo chamber where people just listen to who they agree with already,” Bayer said. “Coming here (to Political Union), people have a wide range of perspectives.”

Medill freshman Jessica Liu said this was the first Political Union debate she’s attended. She said she was pleased with how “passionate” and persuasive the students were. Liu was also surprised Political Union members ultimately decided against a repeal in their mock vote.

“Because Northwestern is characterized as a largely liberal campus, it was actually very surprising that in the end, it was 16 (votes) for the ‘con’ side,” Liu said.