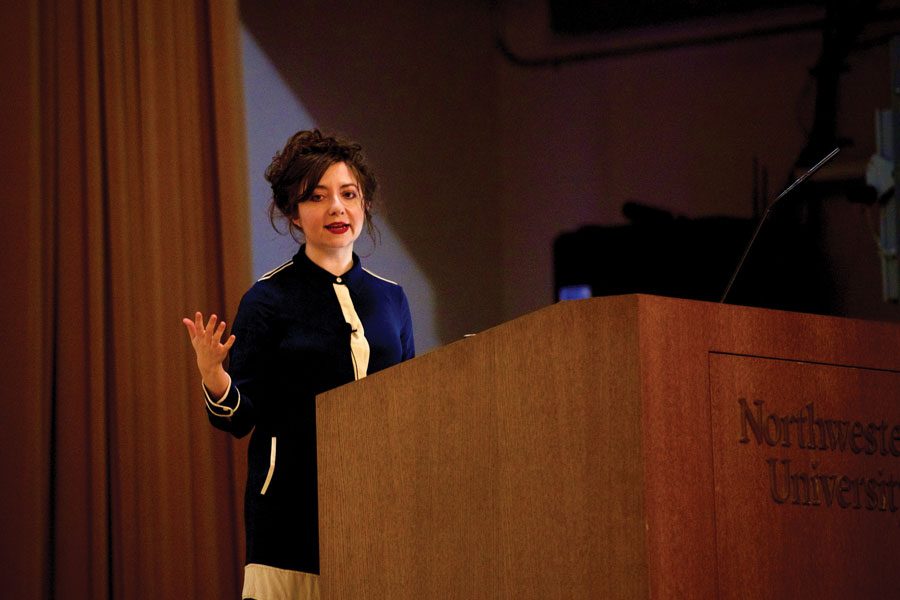 Lissa Rivera speaks during a Sex Week event on Friday. Rivera spoke to about 10 students about her explorations of gender and sex through photography.

Lissa Rivera said she was interested in photography from a young age, when she dressed and photographed her friends in fashions typical of the 1920s to “create” the world she wanted to be in.

Rivera, a photographer and associate curator at the Museum of Sex in New York City, gave the final talk of Sex Week 2018, speaking to about 10 Northwestern students Friday about her explorations of gender and sexuality through photography.

Rivera said she was later successful as a documentary photographer. However, after finding images online where people photographed their life-size love dolls, Rivera said she became fascinated with sexuality and created a studio that resembled a “sex researcher’s office.”

“Everyone thought I was nuts because I threw away my photography career and built this weird office,” Rivera said. “I didn’t know what it meant. All I did was read 19th-century sex manuals.”

Beyond spending time in her office, Rivera said she has also worked in archives at the Museum of the City of New York, where she met BJ Lillis, her eventual partner. Lillis, who is gender fluid, opened up to her and said he wore dresses at home, but didn’t fully understand why he wanted to.

“I was like, ‘That’s awesome, and don’t worry about it. I don’t even know why I wear dresses,’” Rivera said.

Rivera, who said she felt trapped in her marriage at the time, wanted to be with someone who could inspire her and help her express herself artistically. After developing feelings for Lillis, she said she later chose to end her marriage and be with him.

She finally felt “safe” with Lillis, she said. The photographer said Lillis became her muse as she started putting makeup on him, dressing him up and taking photos of him.

“We were buying all this discount fabric,” Rivera said. “We were taking pictures in our tiny broken kitchen. We were just messing around, having fun.”

Rivera said when she photographed Lillis for the first time, she finally saw a “promise of a space where there was freedom.”

Lillis was also able to fully explore femininity as Rivera photographed him, she said. The pictures later became part of Rivera’s most widely-known project, “Beautiful Boy,” which is an ongoing series of photographs of Lillis.

“Honestly, I think that’s the demographic that needs this education the most,” Isaac said. “It is mostly female-driven.”

Weinberg freshman Eliza Gonring, one of the organizers of Sex Week, said she was inspired by Rivera’s willingness to take risks in her life and in her art. However, Gonring added she was disappointed in the crowd turnout.

“Sex is such a positive thing,” Gonring said. “It’s funny how people aren’t comfortable with talking about it.”