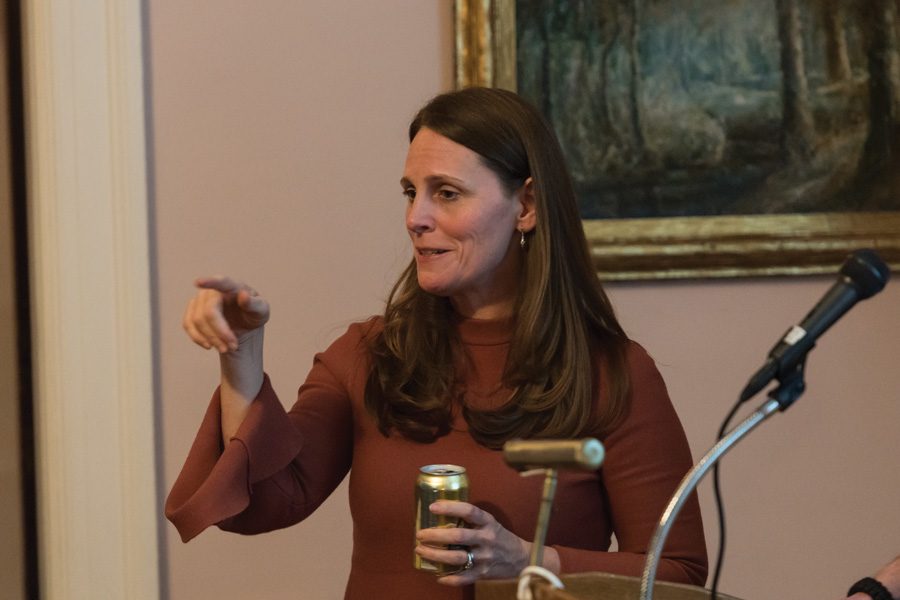 Roseanna Ander addresses the audience at the Woman’s Club of Evanston. Ander said the increase in 2016 homicides in Chicago was curbed largely through various policing reforms.

When the number of homicides in Chicago reached 762 in 2016, Roseanna Ander took note with concern.

“These are people connected to families and connected to communities,” said Ander, executive director of the University of Chicago Crime Lab. “These aren’t just numbers.”

On Wednesday, Ander spoke at the Woman’s Club of Evanston — 1702 Chicago Ave. — about the impact of the sharp increase in homicides, its potential causes and new efforts that have contributed to curbing that spike.

Among those efforts is the implementation of Strategic Decision Support Centers, which aim to expand data on violence in Chicago, she said. The centers have rolled out software that determines the likely locations of homicides, and they’ve started holding daily briefings to aid police commanders in giving assignments to officers.

Ander said the 2016 rise in the homicide rate may have been caused by the strained relationships between police and community members after the 2014 shooting death of 17-year-old Laquan McDonald in Chicago and leadership changes in the Chicago Police Department.

Woman’s Club of Evanston social and enrichment chair Ruth Borushek, who helped organize the event, said she felt it was important to bring someone to Evanston to address the national conversation surrounding gun violence. She added that Chicago gun violence directly affects the Evanston community.

“We’re so impacted by what happens in Chicago just living so closely,” Borushek said. “In terms of the way the whole country views Evanston, it’s based on how people view Chicago so it impacts everything from our property values to funding to our schools.”

Ander noted that the 50th anniversary of civil rights leader Martin Luther King, Jr.’s assassination fell on the date of her talk. She said since his death, little has improved because the gun homicide rate for black men aged 18 to 24 in Chicago was significantly higher than the rate for men of other races in the same age group.

She also referenced the role of the Feb. 14 shooting at Marjory Stoneman Douglas High School in Parkland, Florida, in ongoing efforts to curb gun violence.

“On the gun policy front, I do feel that people are now really starting to engage,” Ander said. “I’m sorry that it took Parkland and everything before that, and it’s also tragic that we’ve continued to have a slow-motion massacre in Chicago where it’s one kid, and then another kid and then another kid.”

Evanston Community Foundation board chair Diana Cohen attended the event after learning of work the Crime Lab has done with other organizations.

She said the community needs to come together to find a solution to violence and crime in Chicago.

“It’s not a single-sourced problem,” Cohen said. “It needs to be addressed through social services, prevention and data analytics … It’s gonna take all of us.”

Ander agreed that such strategies would significantly impact Chicago’s future.

“What happened in our city in 2016 really is an existential threat to the future of the city and the region,” she said, “and the decisions that we make now are gonna make the decision for us about which direction we go in the crossroad that we’re on.”