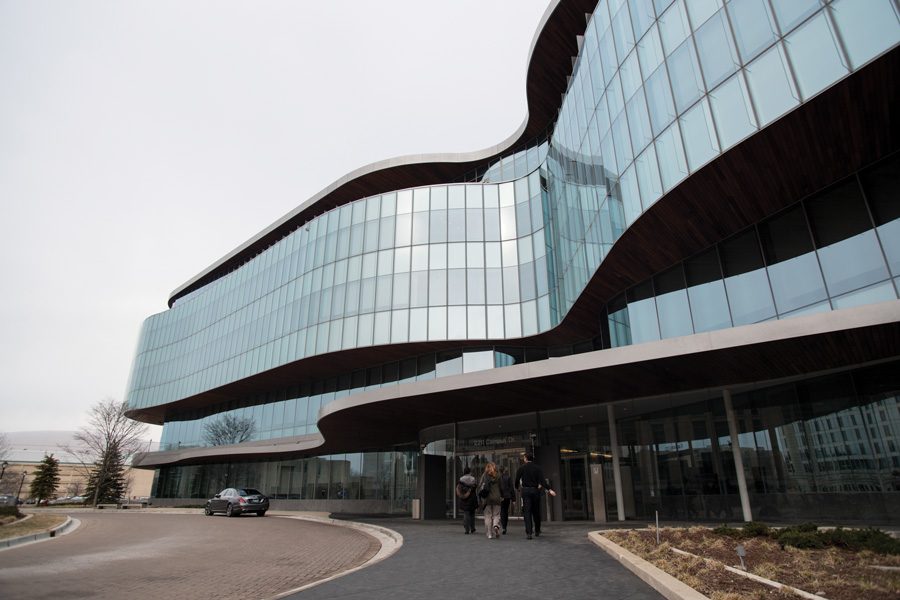 NU is consulting experts at American Bird Conservancy to create solutions for the Global Hub and other high-risk campus buildings, according to a March 23 news release.

Over the past several months, the University has hired contractors to install line-patterned Solyx film windows at the Frances Searle Building and dot-patterned film over a small test area of glass at the Global Hub, said Allison Sloan, a member of Bird Friendly Evanston.

Highly reflective windows can be lethal to birds, as they may view the windows as extensions of sky or trees and believe they are following a safe flight path when they hit the transparent barrier, according to the American Bird Conservancy website.

Sloan said NU’s unique location on the Lake Michigan shoreline and Mississippi Flyway — an area used by hundreds of bird species for migration — makes it urgent for the University to continue its bird-protective efforts as spring migration approaches.

“The University has the unique opportunity to potentially prevent thousands of bird deaths in the coming decades,” Sloan said.

One of the initiative’s main focuses is to make the highly reflective Kellogg building more visible to birds, where Sloan said volunteer building monitors found more than 200 dead or injured birds last fall.

Alan Anderson, executive director of Neighborhood and Community Relations at NU, said the University is testing how materials — including dot-patterned film — can affect birds with varying flight patterns.

“Based on the performance of that solution, with some birds migrating north and some migrating south, we’re continuing to think about whether or not we’ll expand it and make it building-wide,” Anderson said.

NU has also partnered with Chicago Bird Collision Monitors to ensure a volunteer is present on campus every morning during the spring and fall migration seasons to rescue and collect dead or injured birds.

Annette Prince, director of Chicago Bird Collision Monitors, said the University is working on comparing collision data before and after retrofitting campus buildings to guide administrators when moving forward in improving bird habitats on campus.

“It’s a massive amount of glass surface to correct,” Prince said. “We respect the fact that it’s not going to be easy. If (NU) really takes this to heart, we hope that the next building the University builds will have bird-safety (measures) already incorporated in the design.”

Despite the recent initiative, Judy Pollock of Bird Friendly Evanston said bird safety has been an ongoing issue and prior to last spring, she didn’t see an active response from the University.

However, Sloan said NU has now demonstrated it is fully committed to finding window solutions that are scientifically tested and effective for bird safety.

“I hope that other institutions will follow Northwestern’s lead in committing to bird-friendly building design,” Sloan said.