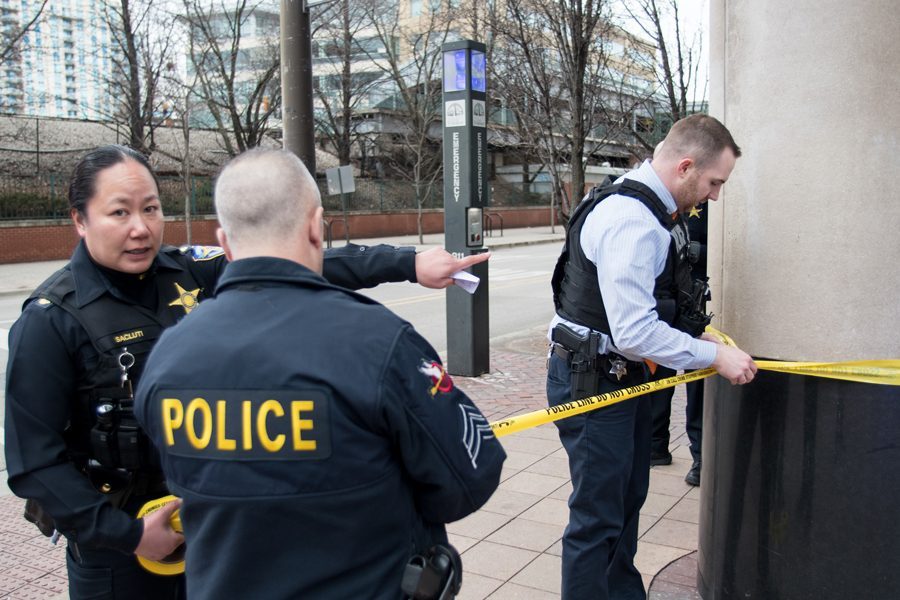 Evanston Police Department officers at a crime scene. The Citizen Police Complaint Assessment Committee revealed a draft of a revised complaint form at a meeting Wednesday.

The Citizen Police Complaint Assessment Committee revealed a new draft of a revised complaint form at a Wednesday meeting, addressing the dissatisfaction expressed in a recent survey.

The survey, which was distributed in February in English and in Spanish, aimed to gauge the public’s familiarity and satisfaction with filing a complaint.

Of the 125 respondents, 37 percent did not know there was a complaint process and 30 percent were aware of the process but unsure of how it worked. Only 23 respondents said they had filed a complaint and were generally dissatisfied with the process.

“There’s room for improvement,” committee member Karen Courtright said at the meeting. “(Like a) better intake process characterized by someone who will make the complainant feel confident that they’re going to be taken seriously.”

She added that a significant number of comments from the survey said a “lack of trust” exists among residents filing complaints to the police department.

Committee members Jeff Parker and Peter Demuth addressed some of the concerns expressed in the survey through the new draft of the complaint form. On a scale of one to five, respondents who had filed complaints ranked the overall clarity of the current form at 2.4.

“We tried to make it as simple as possible,” Demuth said about the new complaint form.

In the updated draft, Parker and Demuth omitted “unnecessary information” like driver’s license numbers. They also clarified why complainants need to provide their name, address and phone number.

Courtright said some complainants “fear retaliation” with the current process, but the new form explains that certain contact information is needed when police contact the complainant for follow-up questions. Then, both can move into the next steps of filing the complaint.

“The purpose of the form is just to get as much pertinent information as possible from the start so that we can make the investigation process as easy as possible,” Parker said.

But committee member Vincent Thomas expressed concern about the language on the form. Types of complaints include “failure to provide protection” and “inappropriate language or attitude” without a further description.

“We open ourselves up to having the form be misinterpreted or misused,” Thomas said, “which can draw attention or resources away from the serious complaints and deal with some of the more frivolous ones.”

The new form also notifies the complainant that they will be contacted within seven days of filing the complaint because “OPS (Office of Professional Standards) takes complaints seriously.”

The committee plans to include this form in its presentation to the Human Services Committee next month. Committee members have been working in three areas: process and documents, best practices and data. After the May presentation, the existing groups will dissolve and new groups will be formed.

The refocused groups, which may concentrate on outreach or alternative dispute resolution, would work until October when the committee must propose its final recommendations to revise the complaint process.