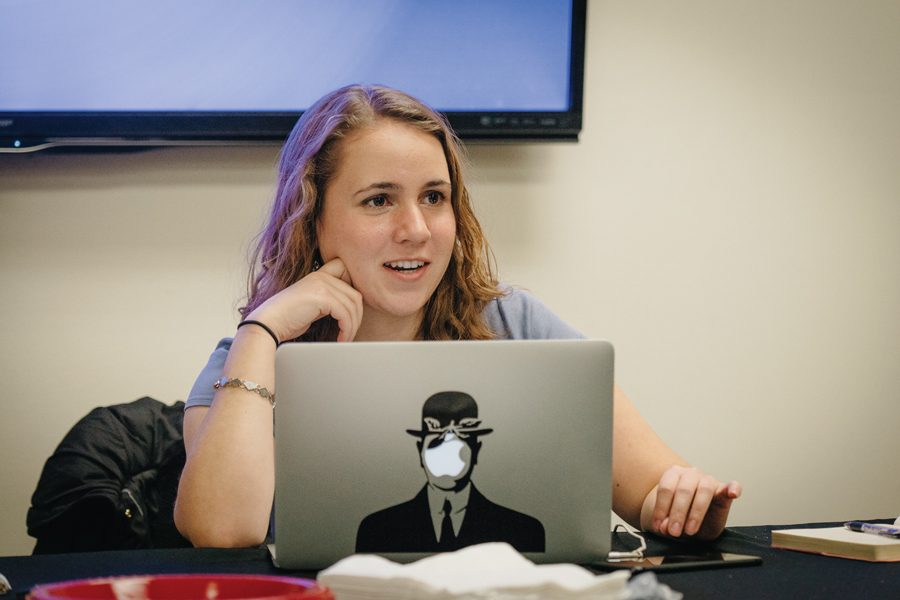 Communication senior Dasha Gorin talks at a January URSA meeting about proposed changes to the Media Arts Grant system. Gorin authored a letter asking for RTVF student support to show that URSA’s concerns did not simply represent a “vocal minority.”

Representatives of Radio, Television and Film majors are doubling down on efforts to reform what they call a flawed funding system for extracurricular student projects.

The Undergraduate Radio/Television/Film Student Association began circulating a proposal letter online Tuesday asking for signatures of support from the Northwestern community. The letter urges administrators to adopt changes to the Media Arts Grant system, which replaced student-administered funding in 2016.

Dasha Gorin, a co-author of the letter and a senior representative of the organization, said the move comes in response to unproductive talks with the RTVF department. She said the department sees URSA’s criticisms as coming from a “vocal minority.”

“I always took for granted that URSA, our function as an organization, is to represent the concerns of students,” the Communication senior said. “I always assumed that when we shared those concerns that the department would trust that we were representing this student body as a whole.”

Gorin said the letter is meant to show that URSA’s concerns with the MAG system are held by a majority of RTVF students. The group hasn’t received pushback from RTVF undergraduates, she said.

URSA will send the letter, which gathered more than 100 signatures as of Tuesday night, to the department early next week, she added. The letter calls for a more holistic application process, including a script requirement, and the return of a class for MAG recipients.

Communication junior Megan Ballew, one of the letter’s authors, said she is frustrated by the lack of action from the department administration. Student representatives are being given the “runaround” because the department head directs concerns to the director of MAG, who has no ability to implement changes, she said.

While administrators understand and listen to URSA’s proposals, she added, the slow progress and exclusion from the process of adopting changes foster a “hot mess” of talks.

Since the implementation of the MAG system, URSA and other RTVF students have made their dissent clear. The letter says the new system has delayed or prevented the completion of some projects, especially those of younger students, because of production crew shortages and financial accessibility.

Communication senior Devon Kerr, another author of the letter, said the lack of resources and support for bigger projects and newer students drew him to push for reform.

“I really care about this issue. It’s something that affects all of the RTVF students,” he said. “I don’t want to leave thinking that the RTVF community doesn’t have that support system.”

Ballew said the process of adopting changes to the funding system need to be streamlined and transparent. Additionally, the administration should seek and acknowledge the need of students’ help in fixing the system, not just listening to their concerns, she said.

By increasing collaboration, administrators will be relieved of some of the constant and occasionally “hostile” complaints from students, she added.

“To really fix the system, they need us,” Ballew said. “It doesn’t look weak to ask us for help because that’s what we want. We want to help them because it helps us. … It’s going to create less conflict for them if they ask us for help.”