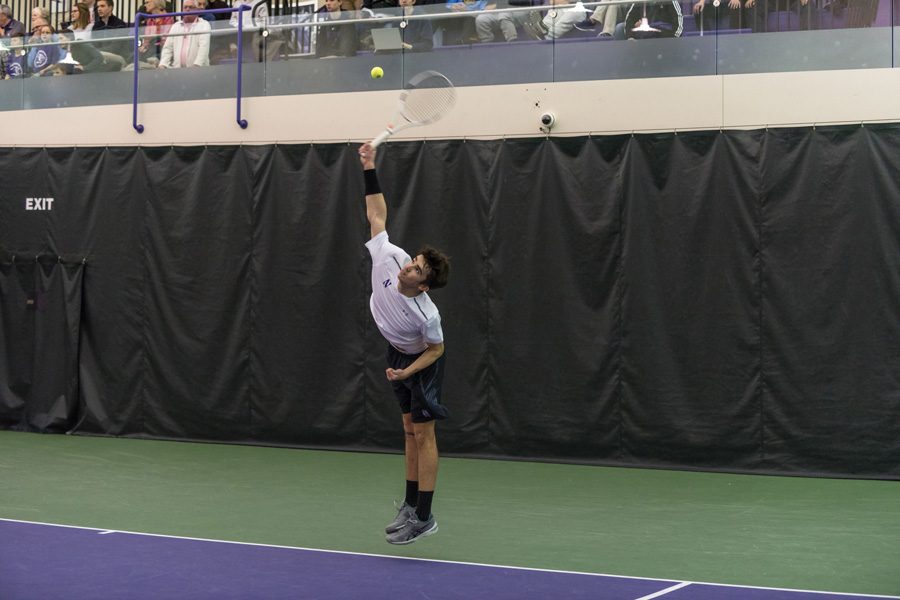 Nick Brookes serves the ball. Brookes said his doubles pair with Michael Lorenzini must improve by giving away fewer points early on in matches.

With seven matches remaining until the end of the season for Northwestern, the Wildcats are aiming to get back on track against Purdue following a defeat against Iowa.

Purdue, (8-11, 0-4 Big Ten) without a conference win thus far this season, extended its losing streak to three after a tough loss to No. 11 Michigan on Sunday. The team was also swept by Indiana in February, falling 5-0 to a Hoosiers team that lost 4-2 to the Cats last month.

Sophomore Dominik Starý, the lone victor against the Hawkeyes last Sunday, holds the No. 1 seed for NU. Starý said his preparation throughout the season has led to him feeling well prepared physically for Wednesday’s matchup.

Starý will face the first seed for the Boilermakers, senior Gergely Madarasz. Madarasz currently sits in the No. 92 spot for the singles rankings, a 13-slot bump back from his position the week before after losing to the Wolverines.

Madarasz makes up one half of Purdue’s top-ranking doubles seed; he and his partner, sophomore Athell Bennett, currently hold the No. 59 ranking. The top doubles pair for the Cats is the junior-freshman combo of Michael Lorenzini and Nick Brookes.

Brookes, who also holds the No. 2 seed for singles, said the focus for the doubles pair is on its execution. He said he and Lorenzini are concentrating on not giving away too many “cheap points” and remaining diligent on the court.

“The main problem with us is that we have given too many points away at the beginning of the match and teams have been able to capitalize on that,” Brookes said. “We want to dictate the match and play on our own terms so we are not leaving it up to chance whether we win or lose. We are not putting it in our opponents’ hands.”

Despite the coaching change, Klingemann remains hopeful and looking for team improvement. He said the team gets better with every match and needs to remain tough.

“Every day is different and every match is a battle, but we are playing pretty well, especially in singles,” Klingemann said. “These matches come down to a couple of points here and there especially in singles, so converting on those points, the crucial points, and the deuce points will help bring us success.”