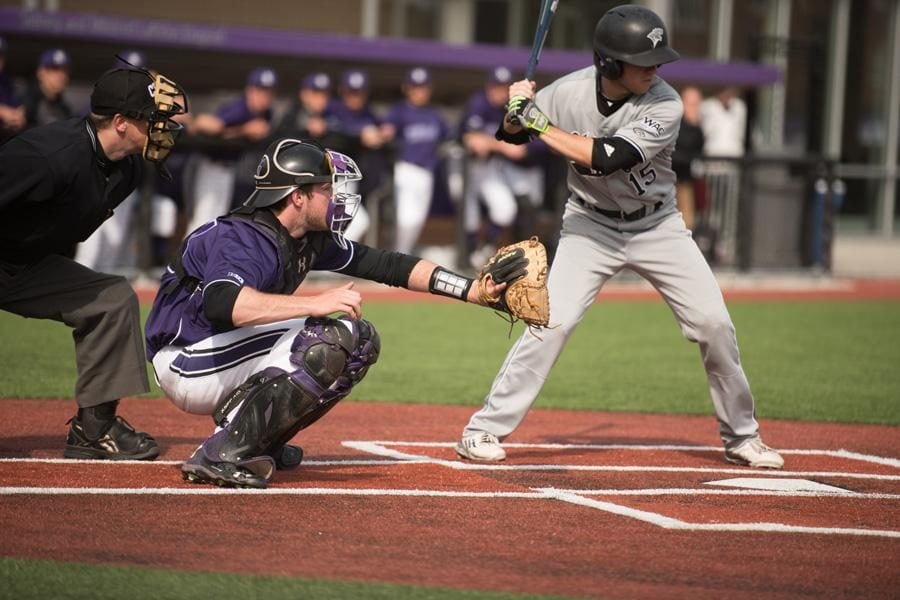 Jack Claeys frames a pitch. The senior catcher cranked 2 home runs in a game against Maryland over the weekend.

After shaky performances in extra inning affairs throughout the past month, Northwestern has raised questions over its readiness for clutch play in crunch-time situations.

Three extra frame defeats in conference play have left the Wildcats (8-14, 1-5 Big Ten) tied for last in the conference and losers of seven of their last eight games. In that eight-game stretch, NU scored more than 5 runs just once: 7 in a loss to a lowly Chicago State team that had fallen in 15 consecutive contests before taking down the Cats.

NU played in four extra inning games last season, splitting the contests, but lost all three of those situations this year. In games over the past month decided by 1 run, the Cats have floundered, going 0-5.

Still, there are bright spots for the team.

In the most recent series against Maryland, (14-14, 2-1) where NU took one of three, senior catcher Jack Claeys went 5-for-12, tallying 4 RBIs and only striking out once. In a 10-inning loss against the Terrapins on Saturday, Claeys had a lights-out performance, with 2 home runs in a game for the first time in his collegiate career.

In that game, Claeys said he felt “locked in” against Maryland’s left-handed starting pitcher Tyler Blohm, getting into hitter-friendly counts before he hit his home runs. Regardless, he said although he definitely enjoyed his individual performance, he would sacrifice it for a conference win.

“Especially in Big Ten games, those team wins are more important than individual performances,” Claeys said. “We just need to get the ball rolling here and come up with some more clutch hits later in the game.”

Freshman left-handed pitcher Quinn Lavelle dominated in the team’s sole win against the Terrapins, pitching a complete game shutout and lowering his ERA on the season to 2.10. In his time on the mound, Lavelle struck out eight batters and only gave up four hits and one walk.

Lavelle, who netted Big Ten Pitcher of the Week for his outing, is the first NU pitcher to earn that distinction since Brandon Magallones in May 2015. Lavelle said the quality start gave him confidence going forward, and that he’s approached each at bat knowing every collegiate hitter can be dangerous.

“When you’re at this level, all these guys were the best hitters on their high school team,” Lavelle said. “There’s almost zero guys that are a for sure out. But I think I have adjusted pretty well, just not overlooking anyone.”

Coach Spencer Allen said he was impressed with pitching performances from Lavelle and fellow freshman Jack Pagliarini, who pitched 7.2 innings on Sunday and struck out seven batters.

Nonetheless, to win close games, Allen said the team needs to focus on putting the ball in play and executing with runners in scoring position.

“We’ve played solid baseball,” Allen said. “The biggest takeaways are we have to get the big hit, make the play, and we’re just not quite finishing games.”

Through six conference games last season, the Cats held a 2-4 record, only marginally better than their 1-5 mark through the same time frame this season. That team went on a spirited run to end the season, winning seven of its last nine regular season conference games before upsetting its way to the Big Ten Tournament championship game.

Claeys said this year’s team is in a better situation than the previous one, and that they need to not panic going forward. He added that if a few things had gone differently in tight scenarios, the Cats could easily have won three or four more games.

“Last year, I feel like in our losses we were getting blown out by teams, we weren’t putting together competitive, full-inning games,” Claeys said. “This year, you look at our losses, they’re good games against good teams.”

NU will face the reeling Illinois-Chicago Flames, who have lost their last five games, on Tuesday.