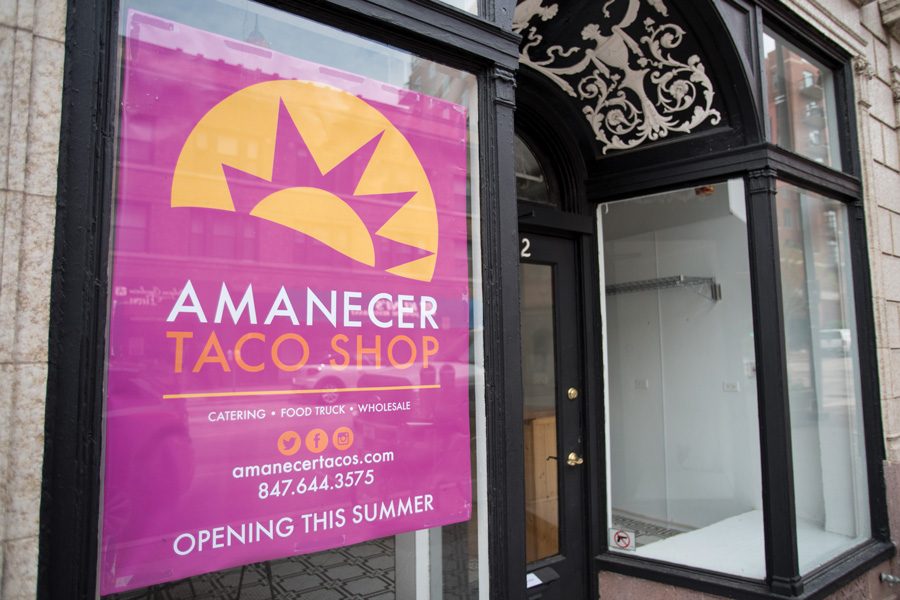 Amanecer Tacos, 512 Main St. Amanecer co-founder Ana Vela said it was challenging for her to open the restaurant, but the Evanston community has been “very supportive” since the opening in November.

Eighty-two new businesses opened in Evanston in 2017, including the first suburban locations for Furious Spoon Ramen and Aloha Poke, according to the Economic Development Division’s annual report released March 6.

The city saw a similar rise in 2016, with 86 new businesses. And with some Chicago-based restaurants and a Target store opening in Evanston earlier this year, Paul Zalmezak — the city’s economic development manager — said there is a “strong” mix of independent and national retail.

He added that the food business is strong in Evanston, retail is stabilizing and unemployment is declining. The commercial vacancy rate also reached its lowest point in 10 years according to the report, dropping to 4.9 percent.

Zalmezak said though the report shows some economic stability, there is still room for improvement.

“The number one thing we hear from businesses is that they’re all doing OK and they’d like to be doing better,” Zalmezak said. “The way that we can help them do better is to allow some residential density in the downtown which would help drive business. More people living and working in downtown would really help our local businesses.”

And he said there seems to be a revolving door of restaurants.

Ana Vela, co-founder of Amanecer Tacos, said it was challenging to open her brick-and-mortar location in 2017. Vela waited three years to open the location after running her food truck in Evanston before she felt confident in the business’s future.

“A lot of restaurants close pretty quickly in Evanston, so it’s definitely a great community to have for business, but it is very competitive and new things are always popping up,” Vela said.

The report also highlighted businesses that plan to open their doors on Howard Street in 2018, including the second Evanston location for Patisserie Coralie, an expanded Good to Go Jamaican restaurant and the relocated Theo Ubique Cabaret Theatre.

Ald. Ann Rainey (8th) told The Daily in November that people have become more comfortable on Howard Street after increased police presence. In November, the Evanston Police Department vacated its Howard Street outpost, opening up the space for Cafe Coralie to move in and marking a newfound confidence in the area.

“Now we have a lot of exciting, wonderful, tax-paying, entertainment-generating, wonderful things for people to do down there,” Rainey said. “We don’t really need a police outpost any longer, and that is a very positive thing.”

The city also brought in $4.8 million in construction permit fees, with construction and renovation projects at Northwestern contributing to about 80 percent of the revenue. The Fountain Square construction and new Target store opening also played a role.

Zalmezak said the Target is “exceeding expectations” and that he hopes it will stabilize retail in downtown Evanston. He added that once construction on the new Fountain Square is complete, new businesses will want to open around that area.

“The Fountain Square redesign is going to be a great improvement to actually have an outdoor, urban experience,” Zalmezak said. “It’ll just be a nice place to linger.”