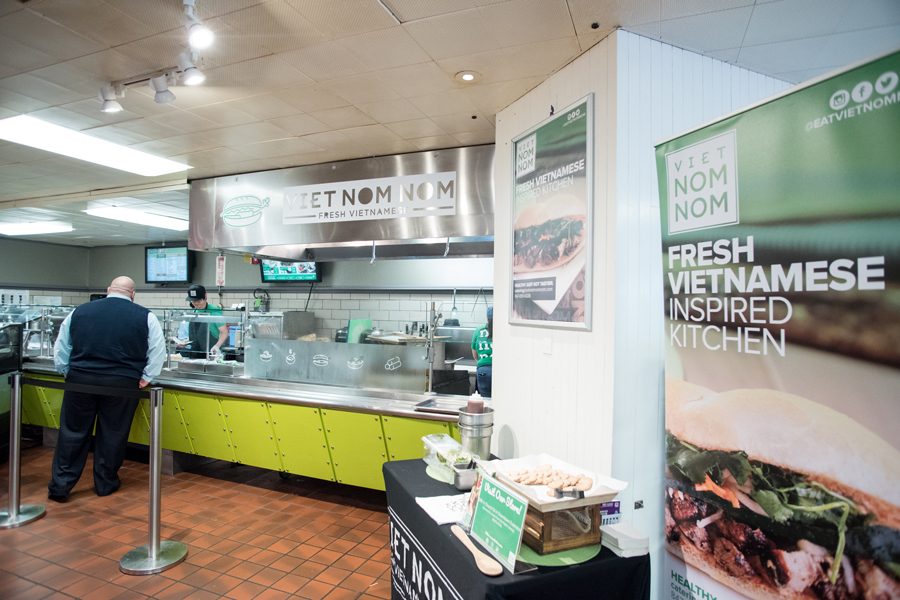 Following storefronts and pop-ups by restaurants including Frontera Fresco and The Purple Pig, yet another local eatery will set up shop on the Evanston campus, feeding an effort by Northwestern Dining to bring students fresh food from nearby businesses.

“We wanted to partner with some local businesses that we can bring in to Norris to make a better offering to the students of what our local community is like around us,” he said. “Viet Nom Nom was a great partner to start that with.”

While the change gives students better access to food they already enjoy, it also allows Northwestern to feature a startup created by a member of the “Northwestern family,” Doyle said.

Owners Alan Moy and Noah Bleicher (Kellogg ’15) began developing the business when Bleicher was still a graduate student. The two have since moved from offering “grab and go” options in the Kellogg School of Management to operating out of several campus locations and an Evanston restaurant.

The Norris kiosk marks a new milestone for the business, which Moy said he hopes to eventually expand throughout the Chicago area. For now, however, Moy said he enjoys his partnership with the NU community.

Its location is convenient for students, he added, and the menu is inclusive of different diet options.

The menu offers healthy, tasty and high-quality food that fits both the business’ “mantra” and food trends enjoyed by students, Moy said. In addition to salads, peanut noodles and spring rolls that are made fresh daily, the kiosk will offer pho and banh mi sandwiches with several protein options like chicken, pork and tofu. Moy said he hopes to eventually bring new options like bubble tea and smoothies.

The kiosk is open on weekdays from 11 a.m. to 3 p.m., but Moy said he hopes to expand those hours. Meanwhile, Viet Nom Nom’s kiosk is a welcome addition for Norris executive director Jeremy Schenk, who said he has received positive feedback about the retail dining changes, such as made-to-order pizza station The Kiln and other pop-ups.

“We’re really trying to look at how do we meet those growing and changing needs of what our students are wanting,” he said. “We know that means we need to be fresh in ideas and fresh in concepts and that we are constantly being innovative in our approach.”