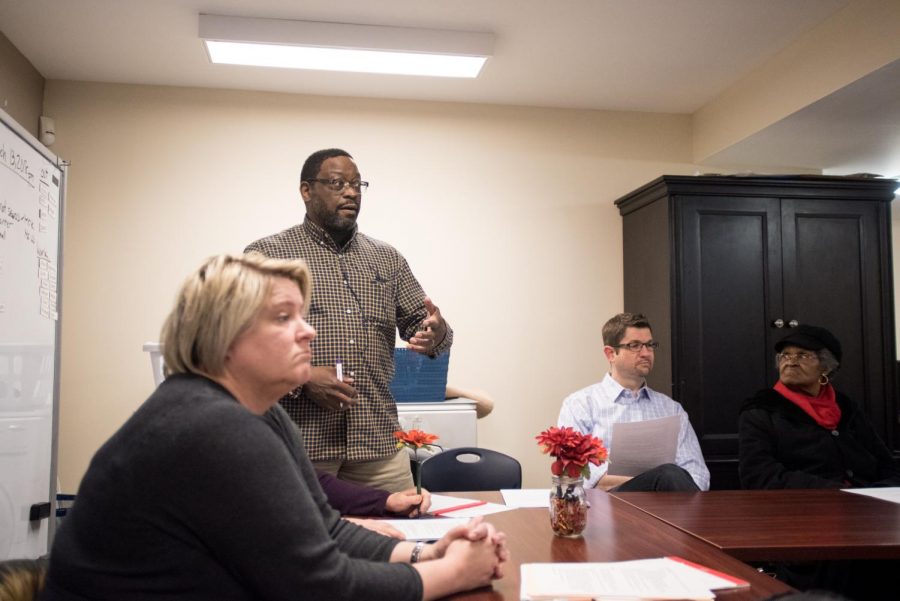 5th Ward resident Verzell James addresses residents at the monthly West End Area Block Club meeting at the ETHS Transitional House. Much of the meeting was spent discussing the impact of Evanston’s plans for a controversial water pumping station on Church Street, which would provide large revenue for the city.

Roughly 20 5th Ward residents gathered for a monthly meeting Tuesday night and discussed the impact of the looming water pump station, which is expected to begin supplying Morton Grove and Niles with water by the end of the year.

Members of the West End Area Block Club, a neighborhood organization focused on general relaying of information and resolving neighborhood concerns, expressed uneasiness about the city inadequately involving the community regarding the pump station. On Feb. 13, the city entered into an agreement with the Morton Grove-Niles Water Commission to supply them with water from a pump station, which the city will construct on a lot at 2525 Church St. The land was previously designated for “recreational use.”

Resident Verzell James said community members had created an “impact task force” meant to stop the pumping station from entering the neighborhood while seeing that the residents are treated fairly.

“The way that this whole process went down, we weren’t treated humanely as far as I’m concerned,” James said. “We weren’t given a lot of proper notice … as well as some things that were done incorrectly by city council and the city government.”

James and resident Glenn Mackey said their experiences submitting an appeal to Evanston’s Planning and Zoning department had been challenging in the past.

Mackey described their experience as “a wild goose chase” and one that he believed contained lies and violations from the city.

“We’re at a standstill as far as waiting to hear back from the people we sent this information to, but the task force is not standing still,” James said. “We have other things and other ways of doing things. … The way I feel personally: We’re at war for us, the people and what’s going on. It’s not right.”

Construction for the pump station is slated for June at the site of an abandoned school on Church Street and McDaniel Avenue, just south of Beck Park in the 5th Ward. The construction, which will be paid by the city of Morton Grove-Niles Water Commission, will include the pump station, along with the hotly debated possibility of a soccer field, splash pad and public restrooms.

The station is expected to bring in revenue for Evanston, which Ald. Robin Rue Simmons (5th) projects will prevent increased taxes or fines while reducing employee layoffs. Despite these benefits, residents said at the meeting that they felt they had been mistreated by the city and had concerns about the environmental and social impacts of the station.

During the meeting, Darlene Cannon and Kiera Kelly from Evanstonians for Responsible Planning addressed the attendees, calling for a coalition across Evanston’s wards given that instances of residents being “blindsided” has become a common theme in multiple wards, they said.