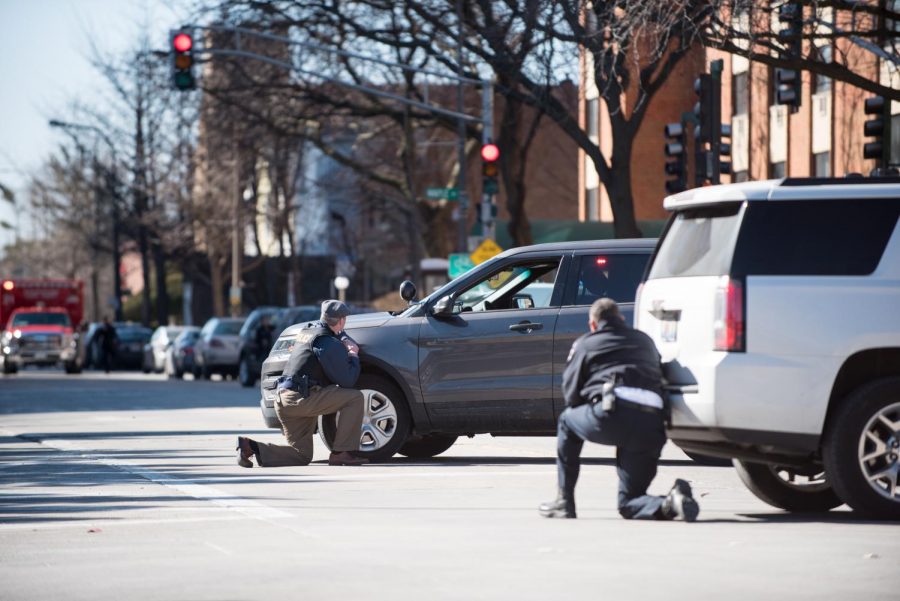 Officers respond to the scene outside Engelhart Hall at Emerson Street and Maple Avenue.

Medill sophomore Gabrielle Bienasz spent her Wednesday morning marching with hundreds of other students to honor the victims of the school shooting last month in Parkland, Florida, and advocating for gun reform.

She spent her afternoon huddled in a room in Norris University Center, in the midst of a campus lockdown after reports that a person carrying a gun was on campus, feeling “blank” and “powerless.”

After police responded to a call from a man who claimed he had shot his girlfriend at Engelhart Hall, a graduate residence, the gun threat was determined to be a hoax. Still, Bienasz said the fact that someone with a gun can send everyone on campus into hiding is “the most absurd thing about living in America.”

“We know how exactly how this goes, and we all are horrified because we’ve seen so many other people on social media and on the news sobbing after their friends have been gunned down going to class,” Bienasz said. “It was the school shooter script, and whether or not it was real, we all knew that script exactly. We all participated in it. We all felt it.”

Students across Northwestern’s Evanston campus spent more than an hour in lockdown after an emergency alert came out about 2:40 p.m. warning people to seek shelter. Many barricaded themselves in classrooms and offices, refreshing social media feeds for updates and texting friends and family.

Communication sophomore Jack O’Dea was in a “relaxed” final class, learning a Syrian dance and chatting, when his professor saw the alert and ran to the door. About 15 people from the hallway were shepherded into the room, he said, and they all pressed against the back wall in the dark with the blinds closed and the lights turned off. After hearing rumors that the shooter was walking toward Fisk Hall — near their classroom in the Virginia Wadsworth Wirtz Center for the Performing Arts — O’Dea said they decided to barricade themselves in, pushing chairs and tables up against the door.

The experience was “surreal,” he said, and realizing it happened on the same day as the walkouts was “an odd and terrible feeling.”

O’Dea also said the communication he received during the lockdown was “very mixed.” Though he felt the updates from NU were somewhat reassuring, he said news organizations’ reports and people sharing rumors online produced conflicting information and created a sense of “general chaos.”

Medill sophomore Bianca Austrheim, who was giving a campus tour at the time of the alert, said having to direct prospective students and families to safety was frustrating when limited information was being released. SESP sophomore Matt Casler, a former Daily staffer, was in Kresge Hall, helping usher a friend and other students upstairs, and said he realized “Northwestern doesn’t really have a procedure for what to do when a thing like this happens.”

Casler, who said he gained experience with crisis communications after the 2016 Pulse nightclub shooting in his hometown of Orlando, said it was “jarring” how procedural the situation felt as he went into “automated overdrive.” But though he mechanically went through the steps of running, hiding and preparing for a shooter, he said he later felt the University response had been lacking.

“(Sending a text) isn’t sufficient when a professor doesn’t know how to lead a group of students in a class,” he said. “There is no procedure, and that’s dangerous because you can’t just assume that a place is going to be safe forever. Because you never think it’s going to be your school.”

University spokesman Al Cubbage told The Daily that University officials are following up on concerns about conflicting information in the emergency updates with an after-action analysis, as there appeared to be a “glitch” in how the follow-up messages were sent out.

Earlier in the day, Cubbage told The Daily the University sent the same message several times warning people about the situation and advising them to shelter in place to “keep people safe until (they’re) absolutely certain that the threat is no longer in existence.”

“The challenge is that you want to give information as quickly as you can, but a lot of times, and this is a good example, you just don’t have definitive information,” he said.

In an email to the NU community Wednesday night, University President Morton Schapiro said the incident “gave us the opportunity to test our response and our emergency notification processes that are used when receiving a report of an active shooter.” The University will continue with a “thorough review” of the incident and response, he said in the email.

Ellise Shafer, who stayed in the underground floor of Norris with a group of students, had just given her final presentation for a journalism class about gun violence in Evanston. In February, Shafer had trekked to Springfield with a group of Evanston parents to rally for gun control, conducted interviews and said she had felt “so close to the subject for the past few weeks.”

As the Medill freshman texted her mother, she could not help but think about the screenshots of text messages between parents and students at Marjory Stoneman Douglas High School she had seen weeks ago.

“I remember reading those and just being so emotionally taken with them and just thinking like I can’t even imagine having to send that text to my mom,” she said. “And today I did that. … You never think you’re going to have to say those things to those people.”

While Shafer’s second journalism class of the day was cancelled in the wake of the event, several graduate students in another class reported that their professor continued to hold a final exam once the lockdown was lifted, before it had been determined the report was a hoax.

Five students in the class, who all requested to remain anonymous, said though they were given the option of taking the exam the next day, many had to take it Wednesday due to travel plans.

Students were visibly upset and crying during the test, the students said, but their professor continued with the exam. Friends and family were trying to contact them during the exam, they said, and they were still receiving updates from NU but couldn’t check their phones.

Lindsey Hardenbergh, a graduate student, lives in Engelhart Hall and went to pray when she received the first emergency text. She said when she realized the reported incident was in her building, it made the situation “a little bit scarier.”

Hardenbergh said she kept her door locked, but did not barricade it because it would have taken a lot of effort and been noisy. With police surrounding the building, she said she also didn’t feel in “immediate danger” to take such measures.

Dean of Students Todd Adams — who said he was “tremendously grateful” the NU community was safe in an email sent to students about 5:30 p.m. — told The Daily that events like these can cause fear, and that people can feel hopeless when they don’t know what to do. However, he said this incident also inspired the community to come together and be there for each other.

“As difficult of an afternoon as we had, I was really privileged to be part of the community this morning when hundreds of people gathered at Deering to honor and remember those lives that had been lost to gun violence,” Adams said. “While we had a very scary and challenging incident this afternoon, I think we also saw some of what was best about Northwestern today.”

After the lockdown, Northwestern Stands with Marjory Stoneman Douglas — the group of students who had organized the march and walkout — posted on Facebook that the vigil originally planned for tonight would be postponed. Danny Cooper, a former Daily columnist who was one of the student organizers, said though it’s “a shame” that the vigil was pushed back, the scare made him more determined to be an activist for gun reform.

“We’re so thankful and happy and lucky that this was not a real incident, but there’s no denying that the terror that I felt and that this entire campus felt was really very real,” the Medill junior said. “And that’s a terror that doesn’t have any place anywhere.”

For Casler, who has been working with Cooper and the group in organizing against gun violence, the morning’s walkout continued to ring in his mind throughout the lockdown.

“During my speech this morning … I said, ‘We are not next, (Evanston Township High School) is not next, Evanston’s not next, Northwestern’s not next,’” Casler said. “That’s what rattled me more than anything. I just stood up in front of hundreds of people saying ‘This is not going to happen.’”

This story was updated at 12:30 with additional information from University spokesman Al Cubbage.