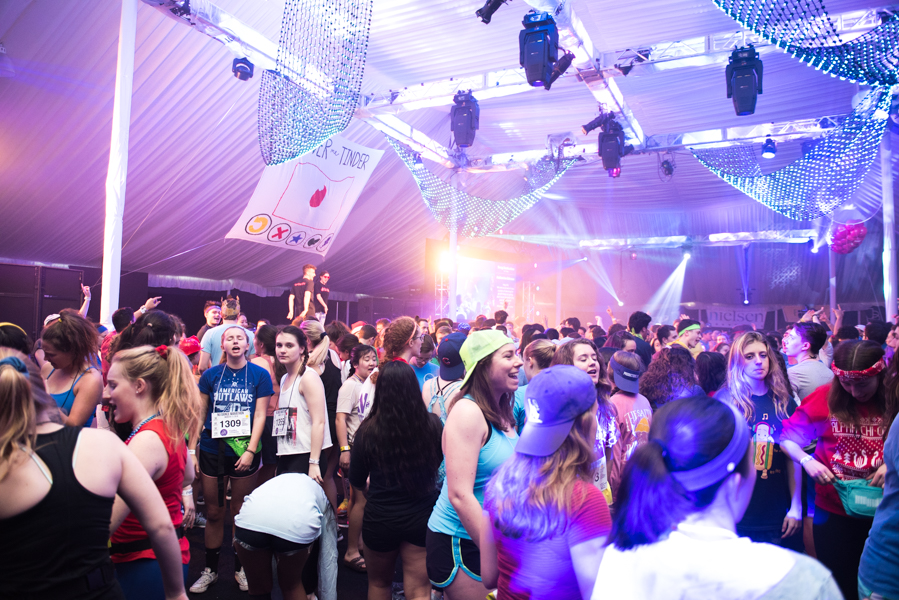 As Dance Marathon 2018 nears its end, some senior dancers reflected on the last four, and sometimes even five, years — and their collective hundreds of hours — spent dancing in the white tent.

“I’ll be like very nostalgic in the last block,” said Paige Leskin, a former Daily senior staffer and Medill senior celebrating her fifth DM. “I remember when I was a freshman and did this, so it’s really cool like looking back and seeing how much everything has changed over the years.”

More than 100 seniors were registered to join DM’s 120-hour club this year, including three inductees to the “very exclusive” 150-hour club. Like Leskin, McCormick senior Nnenna Nwagbo will also join the 150-hour club. Nwagbo said she could not skip out on the opportunity to join the ranks of those who’ve danced for 150 hours.

“I didn’t expect for it to be like emotional,” she said. “But when I got to the changing room and I put on my plaque for the first time … I teared up.”

Nwagbo, who leads the Slivka Residential College DM team, said that, after graduation, she hopes to share her DM memories, experiences and advice to future dancers on the team.

“I hope that at least one of the freshmen takes over, and I can just tell them everything I have known through my five years and mentor them,” she said.

Weinberg senior Sebastian Garcia said he feels an unexpected bond with the rest of the 120-hour club members, despite not knowing them all. DM, he said, has been “a positive thing for me throughout my time at Northwestern.”

Garcia, who is on the Dancer Beneficiary Relations committee, said it is rare for a 120-hour club member not to be on a DM committee, something he said brings them closer.

“There’s a lot of people who I don’t really know directly, but I still feel like I have this common sort of bond with,” he said. “There’s a lot of people that I hadn’t met before today and when I found out they were in the 120-hour club … we had a much friendlier rapport than I would with somebody who like I just met in any other situation because we have been through the experience.”

Weinberg senior Doug Murphy said he and other seniors re-learned their freshman year DM dance — which was to the Bruno Mars song “Uptown Funk” — for this year’s DM. Murphy said it has been “really cool” to see the community that formed around the nearly 100 students who’ve done DM four times. At around 6 p.m. on Saturday — the middle of Block 8 — Murphy said he was “past any walls” and excited to hit the end of the marathon.

“It’s all the good parts right here, just waiting to see that final total,” he said.

Both Murphy and Garcia said they hope to stay involved with DM next year by helping their undergraduate friends, either by encouraging them emotionally or helping them fundraise.

“I have lots of friends who are underclassmen who I would love to support,” Garcia said. “I actually had some friends who were alumni … who came and visited the tent earlier this DM, and it made a huge difference to me so if I’m around next year I’d love to be able to be physically in the tent.”