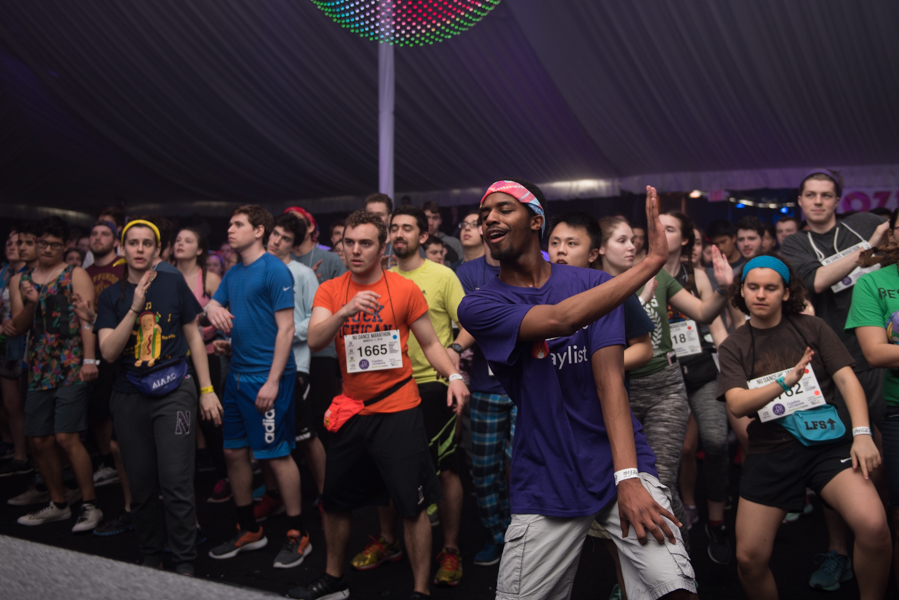 Northwestern students dance during Block 6. Dance Marathon officials announced that $9,417 had been raised toward Saturday's goal of reaching $33,000 in 10 hours.

With the sun up and the rest of Evanston awake, dancers toiled past the halfway point to the tunes of Michael Jackson, Aretha Franklin and Bon Jovi.

Dance Marathon officials told dancers that $9,417 had been raised Saturday toward their goal of reaching $33,000 in 10 hours. DM finance co-chair Alex Keller, a Weinberg senior, told The Daily the money raised so far will fund 1,000 resource packages for Chicago students.

Dave Cotugno, senior management of development at Cradles to Crayons, said the total money raised by DM will help the organization double the number of students served to 60,000 and reach 250,000 students served in four years.

“The reason for our growth goals, and those aggressive four-year growth goals, is because of NUDM,” he said. “It’s been truly transformational. It’s the best thing that could’ve ever happened to us, especially because we are a fairly new nonprofit to Chicago.”

McCormick sophomore Andrew Gutknecht, a second-year dancer, told The Daily that though the first half of the marathon is “by far always the hardest,” it gets easier from Block 6 on.

“You hit a wall at a certain point, you just feel absolutely dead,” he said. “But you get your second wind, that’s how I’m starting to feel at this point.”

Dancer and Beneficiary Relations co-chair Max Sterling told The Daily that dancers start to regain their energy past the halfway point after people realize their time in the tent is nearing the end.

DM invited Miguel Martinez, vice president of advancement at Casa Central, to speak on stage to motivate dancers. Casa Central is the largest Hispanic social service agency in the Midwest and a partner of Cradles to Crayons.

Martinez said he is always impressed by young people raising money. However, students don’t have enough exposure to actual volunteering and without exposure, it’s difficult to understand the value of giving back, he said.

“On Saturday morning, people would rather sleep in, or go running, or whatever,” Martinez said.

Martinez said events like the marathon are only starting points to a lifetime commitment to charity, especially for the dancers, who he described as “future donors, future board members and future volunteers.”

McCormick freshman Omar Pulido, who won a competition to play with puppies on the second floor of Norris University Center, said he was very exhausted.

In a video played to dancers, Nick Offerman, who played Ron Swanson on NBC’s “Parks and Recreation,” offered dancing tips and dubbed a Chicago Cubs hat.

“I thought I would send you some inspiration because you’re dancing for such an admirable cause,” he said. “Keep dancing, breathe deeply, (and) no giggling. Actually, giggling is allowed, but pace yourselves. Don’t over-giggle, you don’t want to blow your load.”