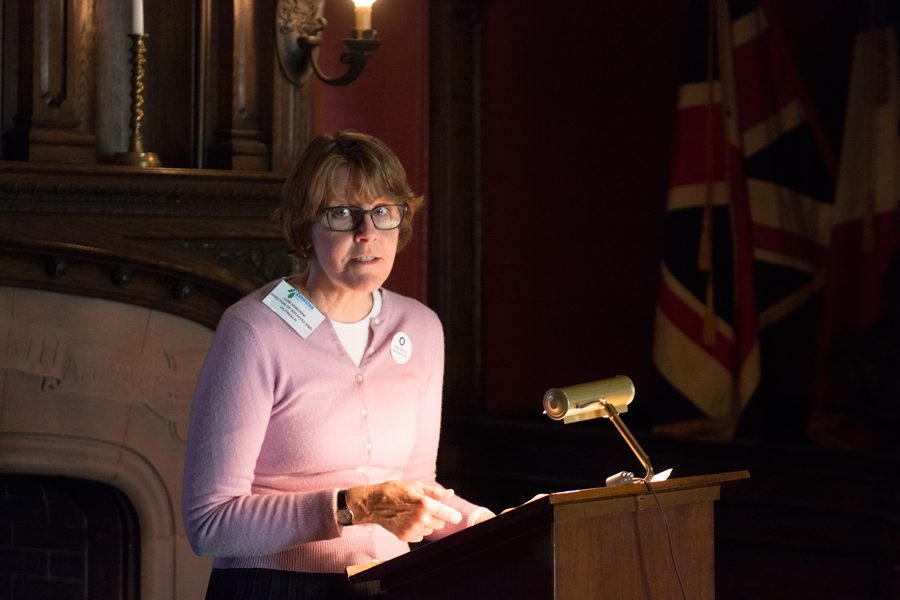 Lori Osborne speaks at a morning event at the Evanston History Center on International Women’s Day. The event centered around celebrating the history of Evanston women who made strides in the women’s movement.

India, Kenya and Japan are just a few countries celebrating International Women’s Day on a national level, said Lori Osborne, director of the Evanston Women’s History Project. But in the United States, there is only a “very small celebration,” she said.

“Just saying, we’ve got some work to do,” Osborne said.

Osborne spoke to about 20 women at a celebration of International Women’s Day, which takes place March 8, on Thursday morning. The event took place at the Evanston History Center and was organized by the Evanston Women’s History Project and Frances Willard House Museum.

Instead of focusing on issues faced by women, the event aimed to recognize the accomplishments made throughout the women’s movement, Osborne told The Daily. The event celebrated local history, highlighting Evanston women who have contributed to the cause.

“Yes, we want to be serious, and things are continuing to be challenges for women and girls globally,” she said. “But we’ve made a lot of progress, and there’s lots to be positive about too.”

The event was centered on celebrating local history, highlighting Evanston women who made contributions to the women’s movement.

Osborne primarily discussed May Wood Simons, an Evanston woman who helped found the first National Women’s Day in 1909 and expand the celebration internationally two years later. Simons later earned a PhD in economics from Northwestern in 1930 and taught part-time at the university.

“I loved hearing about how women in Evanston have been part of the change for a really long time,” said Evanston resident Julie Halpern, who attended the Thursday event. “And I’m proud to be a part of it.”

Halpern has always been invested in women’s rights, she said. Originally from the Evanston area, Halpern spent the majority of her life in New York, where she opened and managed an “off-off-Broadway” theatre from 1999 to 2013, she said.

The theater, Love Street, provided stage opportunities for female actors over the age of 40. After being denied the parts she wanted as an actress in her 40s, Halpern said she was inspired to operate a theater herself, without a male partner.

“It was unusual for a woman to run any type of organization like that by herself,” she said. “A little less unusual now, but very unusual then.”

This year’s event was the first of its kind celebrating historical successes in Evanston, Osborne said. The International Women’s Day celebration continued with a movie screening and discussion Thursday evening at the Unitarian Church of Evanston.

“I love the idea of bringing people together in a really positive way, just to feel good about who we are,” Juron Pearlman said. “It feels great to start my day with powerful women learning about women who worked hard for women.”