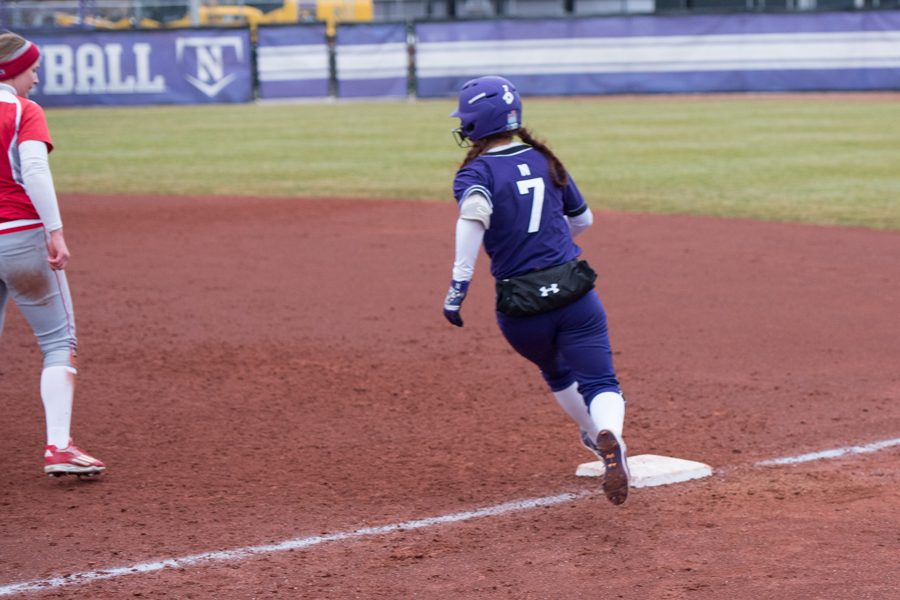 Morgan Nelson rounds first base. The junior and the Wildcats are set for five games in three days this weekend.

After going 3-2 at the Husky Invitational last weekend, Northwestern will travel to Houston for the Houston Hilton Plaza Classic.

Although NU played inconsistently in Seattle, it is looking to take its momentum from the win against No. 13 Alabama on Sunday into its next tournament. Coach Kate Drohan said the Cats finally executed all aspects of their gameplan.

“Our team has had moments of greatness throughout the season already,” Drohan said. “We were finally able to put a game together where we did (well) offensively, defensively and on the mound.”

She said that the key to winning more games is being consistent and dealing with the momentum shifts, something she said NU is finally starting to understand how to do.

One of the consistent aspects of the Cats’ team this season has been freshman second baseman Rachel Lewis. Her steady play, especially this weekend, led her to be recognized as Big Ten Freshman of the Week.

Although Lewis was proud of her accomplishment, she was quick to instead deflect the praise onto the team’s weekend performance.

“It was pretty cool,” Lewis said of winning the award. “We came off of a pretty big win, a team win against Alabama, and it was a good solid weekend that we had.”

Drohan said she was confident in Lewis’ abilities, trying her at different positions in the infield and outfield during the offseason. She added that Lewis’ success is largely due to her love of the game and constant efforts to improve, which gives her “lots of potential.”

“Her ceiling is so high,” Drohan said. “She has all the tools. She has great speed. She has great strength. And she’s a great competitor. So I think that she’ll go as far as she wants to go around the game.”

Lewis has had a huge impact on the team as a freshman. She is second on the team with a .308 batting average and is leading the team in doubles (five), home runs (three), and RBIs (16).

Drohan said the point of emphasis this week in practice was controlling the strike zone offensively by anticipating pitches and adjusting to offspeed pitches.

On the other side of the ball, Drohan has been impressed with NU’s pitchers despite the absence of junior Kaley Winegarner. Sophomore pitcher Morgan Newport said Winegarner’s absence hasn’t changed the Cats’ approach on the mound.

“Our team works really well as a staff,” Newport said. “We work well together, and we compliment each other really well, so I think that our roles have changed a little bit. But the way that we pitched hasn’t changed at all.”

For the Cats to take the next step forward, Drohan said she thinks they need to gel as a team in order to figure out how to win.

Though they’ve shown glimpses, Drohan said NU has to focus on its approach.

“We’re finally starting to really understand what kind of focus it really requires,” Drohan said. “You have to learn how to win together as a team and I feel like we’re on that path.”