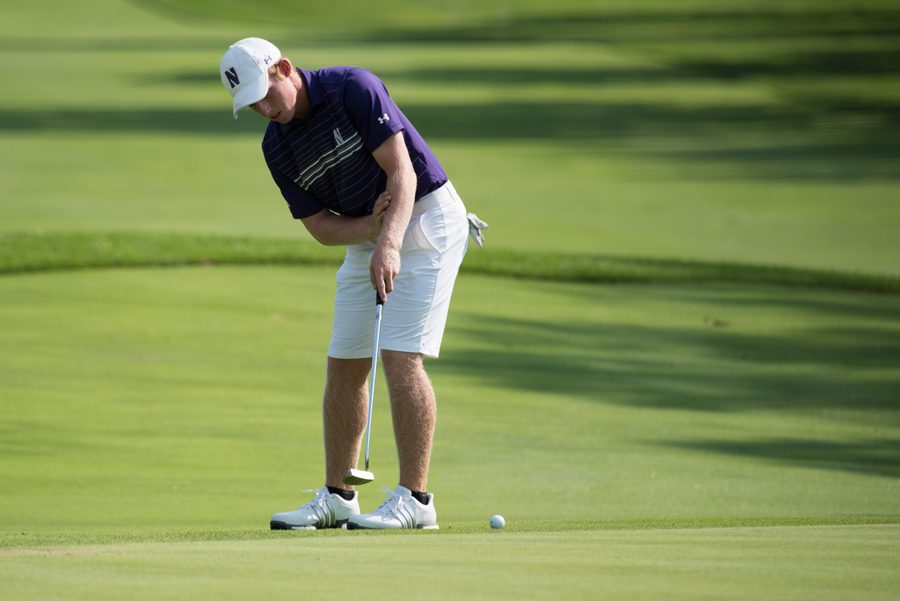 Sam Triplett strikes a putt. The senior was the lone bright spot in a rough final day for Northwestern.

Northwestern struggled in one of the country’s elite college golf events this week as it finished 14th in a field of 15 at the Southern Highlands Collegiate in Las Vegas.

The Wildcats came off a strong performance at The Prestige at PGA West last month, finishing sixth in a field of several top 25 competitors. The same could not be said this time around, as NU fared poorly against seven top 25 teams, four of which are in the top 10.

Through the first day of competition on Monday, the Cats were seated 13th at eight-over-par, with only one golfer, senior Dylan Wu, coming in under par. The following day, however, things seemed to be looking up as the team broke into the top 10, sharing the 10th spot with No. 14 Illinois.

Despite the higher place, no NU player finished below or at par, with Wu and junior Ryan Lumsden tied for 17th at one-over. Come the third day of competition, NU plummeted out of the top 10 and never returned. Senior Sam Triplett was the only Cats golfer who scored under par.

Though Wu said he thought he performed well, scoring 13 birdies, he and the team did not minimize their mistakes.

“Our good golf was good, but our bad golf was worse,” he said. “We know that when we’re playing well we can compete (with) these teams. … We weren’t far from playing a good round (on Tuesday). It’s hard when, like today, nobody steps up.”

Triplett said the team needs to work on its confidence, and added that hopefully practicing outside more in the next few weeks will help NU find its footing going forward.

Coach David Inglis said before the tournament that this would be a good opportunity to see where the Cats stacked up against the country’s best. Coming in more than 20-over, with first-place Florida more than 30 strokes ahead of them, they did not stack up as well he’d anticipated or hoped.

“(We) had a chance to go out there (Wednesday) in perhaps the best scoring conditions of the week and … we were terrible,” Inglis said. “Other than Sam, we didn’t have anyone else do anything too positive.”

Even some of the country’s top teams did not fare as well as projected. No. 4 Alabama, the Fighting Illini and No. 21 UCLA all came in at least five-over as well.

“Overall, it was a very disappointing week,” Inglis said. “Ultimately, we have to take something from it and learn how to be a better team in these conditions. We’ll know we’ll play a qualifier, so that will be an opportunity for the guys to right the ship.”