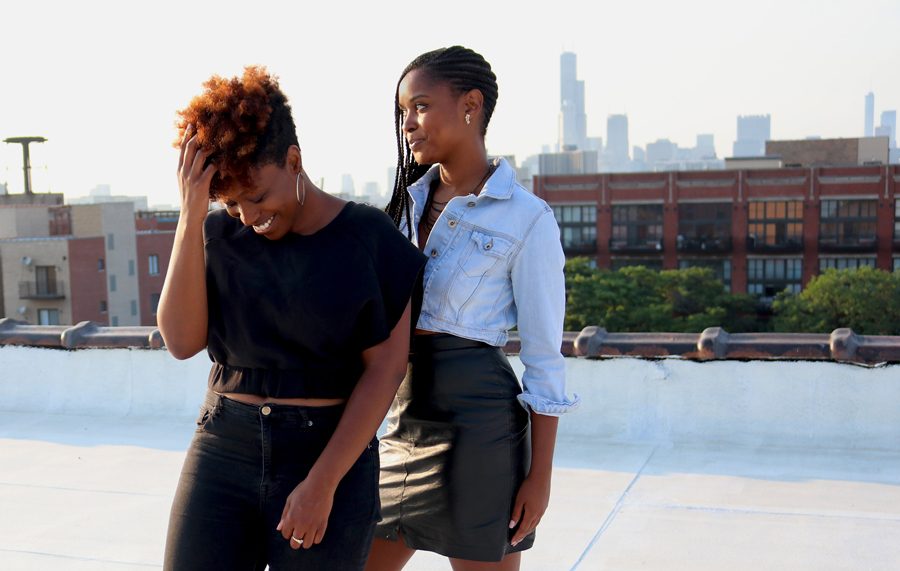 Tiffany Walden and Morgan Elise Johnson. The two co-founded The TRiiBE, an online publication covering black millenials in Chicago, a year ago.

When Morgan Elise Johnson (Communication ’11) recalls her time living in Washington, one incident quickly comes to mind. After telling a man she had just met that she was from Chicago, he replied, “How did you make it out?”

“When you’re from somewhere and you travel to different places and your home just has a bad name, it does something to you,” Johnson said. “I feel like black Chicago has been stripped of its humanity. I didn’t know what, but I felt the need to do something about it.”

That desire led Johnson to co-found and become creative director of The TRiiBE, an online publication run by three Northwestern graduates covering black millennials in Chicago. Feb. 15 marked the first anniversary of the site’s debut, and the publication is celebrating at a function March 10 with proceeds going back to its funds.

The site launched with the goal of reshaping how black Chicago is covered. Web developer and designer David Elutilo (Weinberg ՚14) said most outlets fixate on issues like gun violence while overlooking other important aspects of the community.

“The overall goal is to have this platform where black people in general in Chicago can come to and tell their different stories of what’s going on throughout the city, and just to take back control of what has been broadcast throughout the rest of the nation,” Elutilo said. “People still live their lives, people still do things for the community and those stories need to come out more and more.”

The idea for The TRiiBE first originated when Johnson and Tiffany Walden (Medill ՚11, ՚12), co-founder and editor in chief, were undergraduates in the same sorority at NU. The two hoped to one day collaborate, but did not yet know what that partnership would look like.

After graduation, Walden made her way to Orlando, as a breaking news reporter and Johnson worked at an independent production company in Milwaukee before moving to Washington. The two kept in touch from across the country and would often voice dissatisfaction about their jobs to one another, Johnson said.

Eventually, they both moved back to Chicago, and Walden began reporting on black culture in the city. When Walden and Johnson realized there was a need for more nuanced reporting on black Chicago, they began developing The TRiiBE. After running into Elutilo at a mutual friend’s party, they brought him on board as well.

Walden, who like Johnson grew up in Chicago, emphasized her goal to cover communities of color beyond just crime.

“(In the) coverage of violence and crime, the black community and brown communities are painted in this singular narrative of just being violent,” Walden said. “When you see people like yourself being portrayed in the mainstream media in only that light, how can you aspire to other things? How can you view yourself in a different light?”

Walden said these efforts have helped the website reach a greater audience. Future plans include an upcoming monthly video series with the Chicago Reader and a series about Walden’s home neighborhood in the West Side, she added.

As the website enters its second year, Johnson said she hopes to spark wider change in the way Chicago is covered.

“I hope that our presence inspires the media to tell more deeper and thoughtful stories about black Chicago,” Johnson said. “I hope to see The TRiiBE growing and being able to really give black writers and creatives some sustainability, because a lot of time we’re the ones struggling trying to get work.”