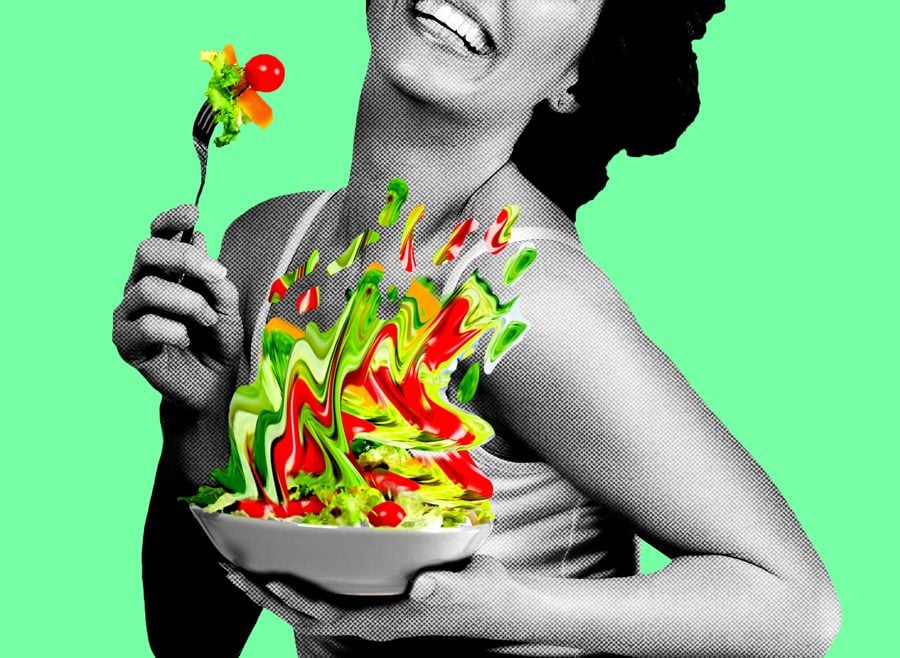 A woman eating salad. “Women Laughing Alone with Salad” is inspired by the viral 2011 meme of the same name.

There are many plays that analyze modern relationships, personal struggles and societal norms, but only one can wrap all of these up together into some leafy greens. “Women Laughing Alone with Salad,” based off the eponymous 2011 meme, delves into the challenges of modern womanhood.

Directed by Communication lecturer Devon De Mayo, the show will run at Theater Wit from March 9 to April 29, and explores how stereotypes of women, especially those portrayed by the media, negatively affect both sexes.

“The play definitely questions what we think of as gender norms in society, how they’re placed in our psyche and what that does to us and our relationships with each other,” actress Echaka Agba said.

Jeremy Wechsler, Theater Wit’s producing artistic director, said the show is told from the perspective of the main character, Guy. Throughout the show, he discovers the various adversities faced by the women in his life and experiences the impacts of toxic masculinity.

Many of the woman characters struggle with the expectations and tropes society thrusts upon them, Wechsler said. Even though many of them are aware of the challenges they face, they’re ultimately unable to escape the pressures of society.

The production engages audience members in the show’s major themes before they even take their seats: Female-identifying patrons will receive a discount on their ticket adjusted to the Illinois wage gap. Wechsler said he hopes this will get audiences to start thinking about gender disparities in society.

“My chief interest was to introduce one of these absurdities, one of these kind of ‘impossible to resolve’ realities that the play poses to us … the moment you purchase the ticket,” Wechsler said.

Due to the show’s surrealist nature, several scenes require odd props, prop designer Jesse Gaffney said. One such moment is when three tons of lettuce are supposed to fall from the sky, she said.

Gaffney’s solution to this seemingly impossible demand was to melt nylon fabric with a heat gun until it shriveled up and looked like lettuce, an idea she said stemmed from accidentally setting an iron on her couch. While the sofa was ruined, Gaffney realized the melted fabric resembled the texture of lettuce.

Gaffney said she hopes people leave the theater not only discussing the bizarre props, but also examining the similarities between characters in the show and individuals in their own lives.

Wechsler said encouraging people to have conversations about gender expectations is the first step in recognizing the societal restructuring necessary for people to reach their full potential, though this alone will not solve the problem.

“You can’t escape the water if you’re a fish,” Wechsler said. “You can accept that you’re in the water, but that is a different problem entirely.”