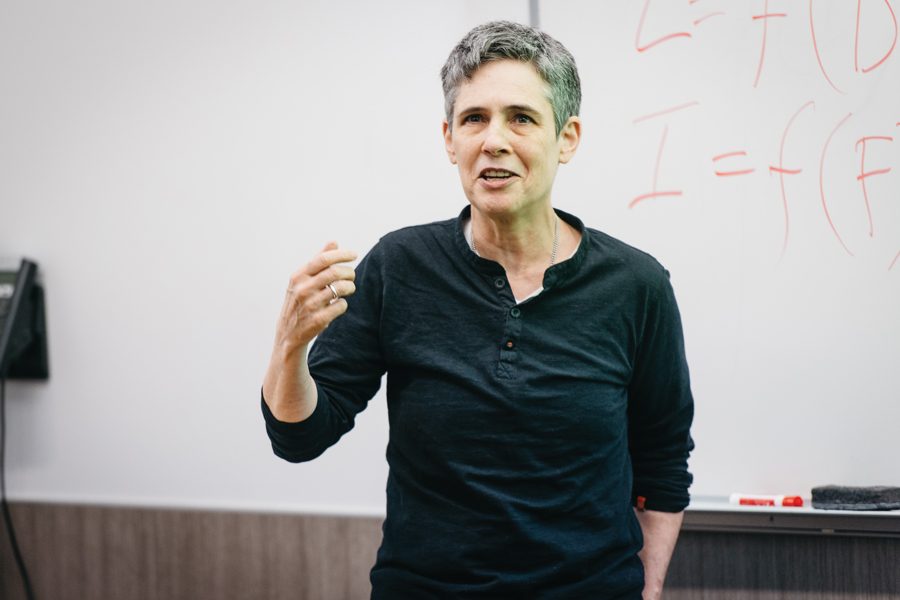 Political science Prof. Jacqueline Stevens speaks to an audience in Kresge Hall about deportation. Stevens focused on two issues: the detention and deportation of U.S. citizens, and the “dollar a day” work program.

According to Northwestern political science Prof. Jacqueline Stevens, deportations should never happen because they are “idiotic and unjust.”

“People should be able to live wherever they want — not based on status distinctions at birth,” she said Tuesday.

Stevens, the director of the Deportation Research Clinic, spoke to a packed room of about 30 in Kresge Hall. She presented work by her and her students on exposing misconduct in the implementation of deportations by the nation’s law enforcement institutions.

By focusing on two key issues — the detention and deportation of U.S. citizens and a “dollar a day” work program — Stevens said she hopes to eventually dismantle the deportation apparatus.

“The idea is to focus on not destroying deportation in one fell swoop, but rather to think about if there are strategic bricks,” she said. “If you pull one of these bricks, maybe the whole thing breaks down.”

Stevens said the clinic seeks to highlight the illegal detention and deportation of American citizens, many of whom may not be aware of their own status as citizens, to demonstrate the flaws of the entire deportation system. That violation, she said, is the “900-pound gorilla in the mine.”

Recognition that many people held in detention are citizens will heighten due process rights, such as access to an attorney, she said. Because removal hearings are ruled by civil law, she said detainees don’t have the right to a bond hearing or attorney at the government’s expense.

The clinic also seeks to uncover and investigate the “dollar a day” work program through Freedom of Information Act requests. Through the requests, she said the clinic found that many detainees were employed for as little as a dollar a day in detention centers and even then were often not paid.

But that information didn’t come easily, she said.

Stevens said the requests were often denied by government agencies or fulfilled with significant redactions. The agencies would also withhold information similar to documents they previously disclosed, she added.

The clinic is still fighting for greater transparency and accountability from government agencies and its contractors in court, she said.

SESP junior Katherine Tierney, FOIA controller for the clinic, said she oversees government correspondence and updates the clinic’s database with documents and records, including information that can potentially prove a detainee’s citizenship.

Shah said the lack of transparency and consistency from agencies such as Immigration and Customs Enforcement is troublesome.

“It’s definitely a problem, especially the inconsistency of it all,” she said. “They really have no reason for (not being consistent).”