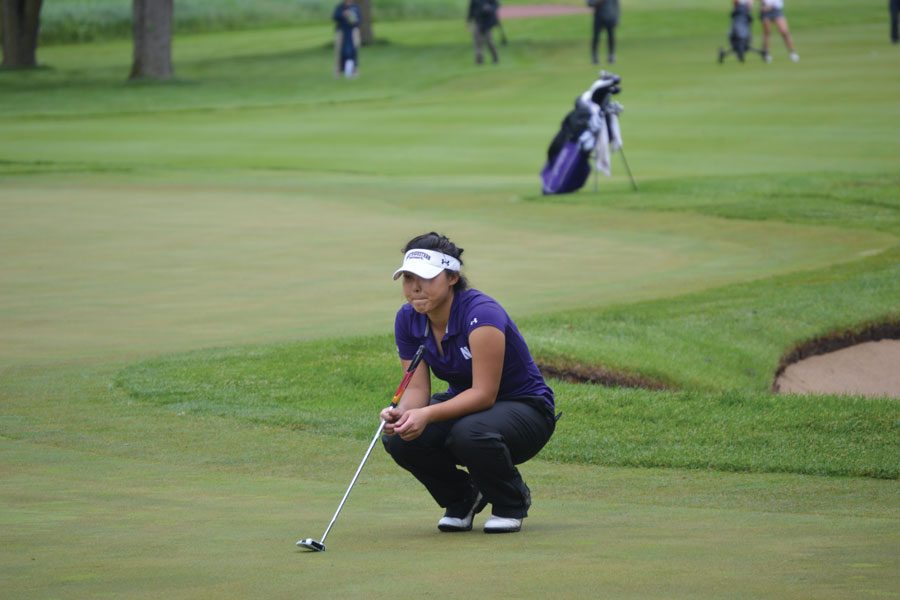 Sarah Cho ponders a putting line. The senior struggled this weekend while the Wildcats turned in a bounce back performance.

After a disappointing start to the winter season, Northwestern bounced back with a top-5 finish in a stacked field at the Darius Rucker Intercollegiate.

The No. 12 Wildcats opened the competition with two impressive rounds, sitting in second place just five strokes behind tournament-leading No. 1 Alabama heading into Sunday’s final round. On the final day, however, NU shot 19-over-par to drop back to fifth. The Crimson Tide went on to claim the title.

“We’ve just got to do a little better job, but it’s a tough golf course,” coach Emily Fletcher said. “We made too many bogeys and doubles, and we didn’t make any birdies. … Five team birdies all day, we’ve got to make more birdies than that. We’ve got to give ourselves better chances and we have to convert on the opportunities that we have.”

The standout player for the Cats this weekend was sophomore Brooke Riley. Riley finished tied for sixth place at 4-over.

It was an impressive bounce-back weekend for Riley, who has struggled at times to fill the spot in the lineup previously occupied by Kacie Komoto, who graduated last year. Riley’s previous best finish in a large stroke play event came back at the Windy City Collegiate Classic in November, and she was coming off a performance that left her tied for 84th at the Northrop Grumman Regional Challenge in mid-February.

Entering the final round, Riley was sitting in third place, putting her in the final group of the day with Alabama’s Lauren Stephenson and Arkansas’s Maria Fassi, two of the highest-ranked golfers in the country. Fassi went on to win the individual competition.

“It was a big confidence booster, especially this last day. I learned quite a bit about my game,” Riley said. I’m excited moving forward. … The biggest thing is I had some more confidence in my swing. I was just being aggressive, picking a line and sticking to it and just zoning in on targets.”

Riley was joined in the top 25 by senior Hannah Kim and junior Stephanie Lau. Kim, who tied for 22nd at 9-over, has finished in the top-25 of every event she’s competed in this year. After a scorching 3-under first round, Kim was only two strokes off the lead on day one, but dropped back the following two days.

Lau has battled through an up-and-down season by her lofty standards, and followed a similar pattern to Kim on the weekend, firing a 2-under opening round before posting higher scores over Saturday and Sunday.

“My ball-striking has improved a lot,” Lau said. “That was a big reason why I was able to play somewhat OK. … There were so many good schools there and great players. It’s good for us to practice being in that competitive environment. It was really exciting and a lot of fun.”

NU’s two other finishers, junior Janet Mao and senior Sarah Cho, each had serious trouble in their opening rounds before posting similar scores to their teammates over the final two days.

On the first day, the only round worse than 1-over to count toward the team score was Cho’s 7-over, but on the final day everyone shot at least 3-over.

“There were some encouraging moments. The first couple days we played pretty well … but (Sunday) was a disappointment,” Fletcher said. “There were some shots there that you really have to stand up and hit good shots and pick good targets and really commit to it, and we just didn’t do a great job of that.”