Wilkinson: What happened? Behind the numbers in NU’s men’s basketball’s disastrous season 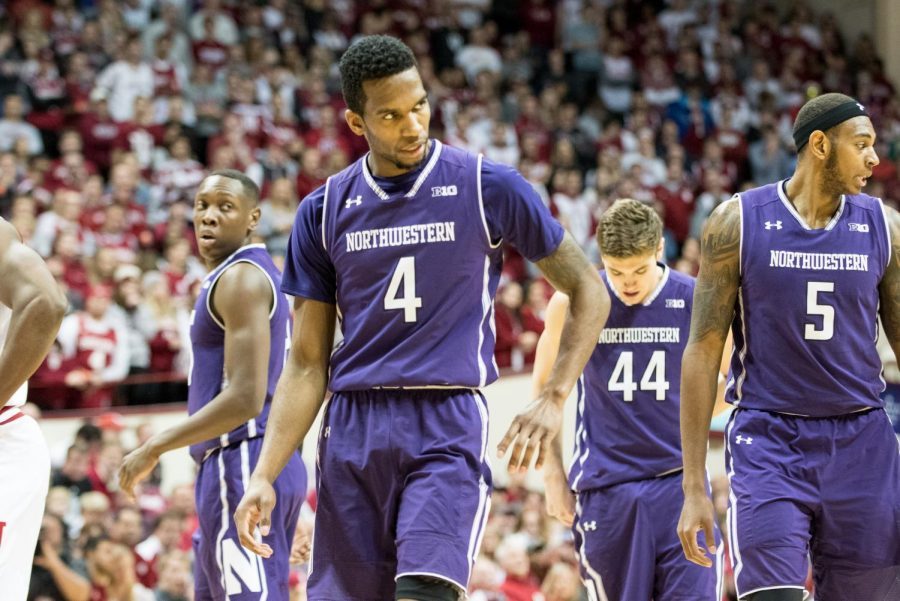 The squad looks around in disarray. Losing by 20 at Indiana was one of many less than stellar performances from the Cats this season.

NEW YORK — For the first time in program history, Northwestern was ranked to start the season. Sliding in at No. 19 in the country, the Wildcats were expected not only to return to the NCAA Tournament but be one of the best teams in the country.

That did not happen.

With a 65-57 loss to Penn State in the second round of the Big Ten Tournament on Thursday, NU’s season is over. The Cats finished 15-17 for the season, but everything collapsed well before the season-ending seven-game losing streak.

The team that many people thought would be the best team in program history turned out to be just another below-average Northwestern squad doomed to a bottom-half Big Ten finish. So what happened?

Plenty of people will look to blame the offense. It was supposed to improve with the addition of redshirt sophomore forward Aaron Falzon filling the departed Sanjay Lumpkin’s role at the ‘4’ spot in the starting lineup.

Falzon was fine as a sharp-shooter, shooting 37 percent on the season and just a touch lower in conference play, but struggled with his efficiency on 2s, shooting only 3-for-21 inside the arc against Big Ten teams.

But, according to kenpom.com, a popular site for college basketball analytics, NU’s adjusted offensive efficiency dipped only two points.

That wasn’t the difference between a program-record 24 wins last year and this year’s disappointing campaign. The defense was.

The Cats boasted the 32nd-best defense in the entire country in their run to the tournament a season ago. With Lumpkin gone and the less mobile Falzon and senior Gavin Skelly getting much of the playing time in his place, opponents torched NU from 3-point range, shooting over 36 percent from deep against the Cats after shooting 33 percent last year. For an easy comparison, that’s the difference between the 3-point firebombing Houston Rockets and the worst-in-the-league Phoenix Suns in the NBA.

By effective field goal percentage, a statistic that accounts for the fact that 3s are worth more than 2s, NU’s defense was 21st in the country in 2016-17. This year it was almost five percentage points worse and ranked 183rd in the nation the day after the season ended.

Early in conference play, coach Chris Collins switched the team’s primary defense from man-to-man, which worked much better with Lumpkin, to a hybrid switching zone that saved the slower Falzon and Skelly from having to chase perimeter players. It worked for a time, and the Cats won four of five games, including one in which they held Michigan to a season-low 52 points.

But then teams figured the zone out, NU lost those fateful last seven games — while allowing five of seven opponents to shoot at least 43 percent from the field — and Collins was left wondering what could have been.

None of Collins’s previous four teams had defended so poorly, and the one that came closest came in 2014-15, when the Cats finished with an identical record to this year’s disappointing performance. If Collins hopes to continue the upward trajectory of the program, he’ll have to start with fixing the defense.