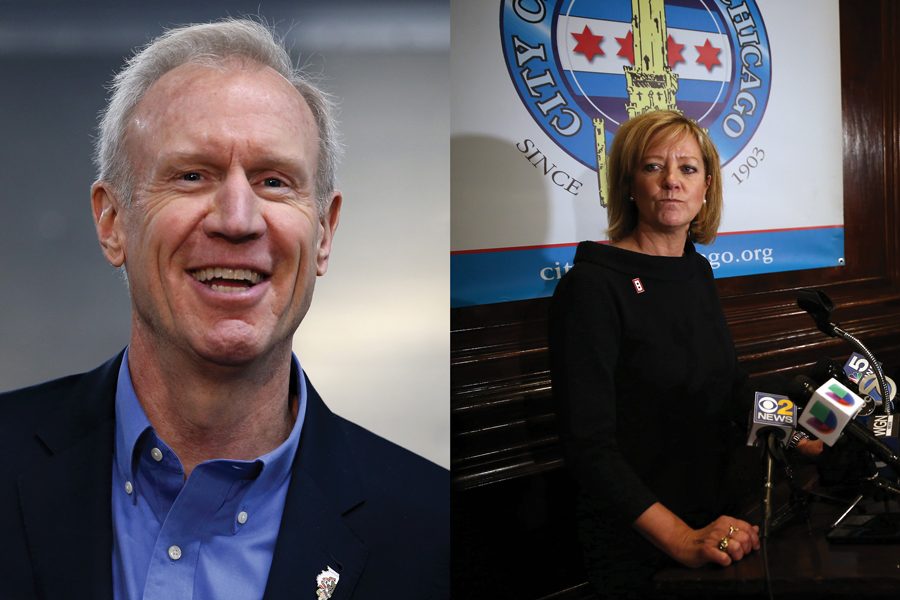 Gov. Bruce Rauner at a press conference. State Rep. Jeanne Ives (R-Wheaton) talks to the media after giving a speech.

Just over a couple weeks remain until Illinois holds its Republican gubernatorial primary, and both incumbent Gov. Bruce Rauner and his challenger, state Rep. Jeanne Ives (R-Wheaton) have led campaigns marked by controversial statements and stances.

They will face off in the March 20 primary, where one will advance to November’s general election.

Rauner was elected governor in 2014, breaking a long-running streak of Democratic governors in Illinois. His first term in office has been marked by a fierce political rivalry with state House Speaker Mike Madigan, which has led to a political impasse on a number of issues.

Under Rauner and Madigan, Illinois failed to pass a budget from 2015 to 2017. Legislators finally passed a budget last summer after the state’s bonds were in danger of being rated “junk bonds.” The state legislature had to override Rauner’s veto to enact the budget, which contains an income-tax increase, a measure Rauner had opposed.

Rauner and the state legislature still remain at odds on a number of issues, and he has remained a deeply unpopular governor across the state. A Morning Consult poll released in January found that Rauner held a 31 percent approval rating in the last quarter of 2017, and a disapproval rating of 55 percent for that same time period.

At the outset of his re-election campaign, Rauner was considered a popular candidate with conservatives. But after brokering a deal to fund teacher pensions in Chicago, restricting the police’s ability to detain undocumented immigrants and coming out in favor of a bill to expand public funding of abortions, his approval among conservatives dropped.

His public campaign appearances have not left him without criticism either: In late February, Rauner made an awkward onstage appearance where he drank chocolate milk to demonstrate his commitment to diversity. The corporate stunt was planned by Tyronne Stoudemire, a Hyatt Hotels diversity and inclusion executive, and was meant to represent workplace diversity during Black History Month, the Chicago Tribune reported.

Stoudemire poured a glass of milk to represent the white men who lead most organizations and then mixed in chocolate syrup to represent diversity.

Ives, a West Point graduate who represents the state’s 42nd district, has billed herself as a “traditional conservative” ready to challenge Rauner, who she claims has not lived up to his campaign promises.

Ives launched her campaign in response to Rauner signing a bill in September that expands public abortion funding for Medicaid recipients and state workers. She has maintained a strict anti-abortion stance and conservative views on immigration policy.

In her campaign announcement, Ives criticized Rauner’s record, saying “we were promised a conservative reform governor. Instead, we got an Ivy League gender studies professor. Benedict Rauner betrayed us at every turn.”

She came under fire in February for releasing a controversial campaign ad meant to attack Rauner’s conservative credentials.

It featured an actor portraying a transgender woman who thanks the governor for signing a law expanding trans rights, a young woman wearing a “pussy hat” who thanks Rauner for making Illinois families “pay for my abortions” and a man wearing a hoodie and bandana thanking Rauner for making Illinois “a sanctuary state for illegal immigrant criminals.”

Rauner, a former businessman and investor, has been able to self-fund much of his campaign; he deposited $50 million as a “first installment” back in 2016. More recently, he received a $20 million donation from hedge fund founder Ken Griffin, according to the Tribune.

Ives, whose campaign funds were estimated at around $400,000 in late January, received a $500,000 campaign donation from one of Rauner’s former donors, Richard Uihlein, a prominent backer of conservative candidates, the Tribune reported.

Despite a rocky campaign season, Rauner himself has expressed confidence that he will win in November.

“I will win the general election,” he said late last year. “I will win it, and if we don’t win it, nothing else matters.”