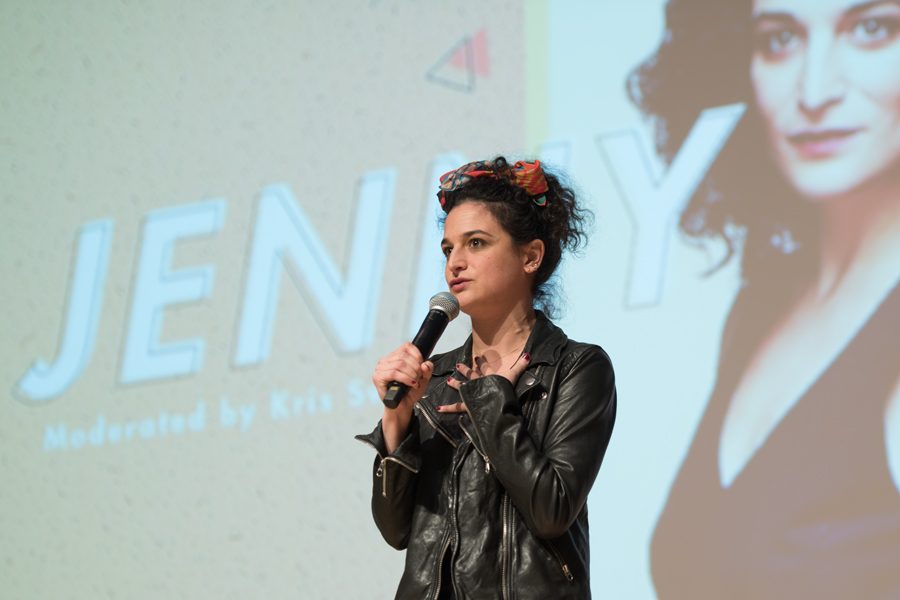 Comedian Jenny Slate said her visit to Northwestern was the first live show she has ever done “maybe in forever” where she didn’t have a cocktail before going on stage. Slate said she was “sober and freaking out” as she stepped onstage at Ryan Auditorium Thursday night at A&O Productions and College Democrats’ winter speaker event.

Slate, known for her roles in “Obvious Child” and “Parks and Recreation” — as well as for co-creating the popular short video “Marcel the Shell with Shoes On” — joked about how she had been introduced as a “speaker” and commented on how serious the title felt for her.

“You guys are young, don’t worry, you’re not going to grow up and you’ll feel like an impostor forever,” she told the crowd. “Get ready! Grow into it, grow up with it.”

During her set, the comedian joked about her family, periods, lizard and bird owners and the “Fifty Shades of Grey” series. After coming to terms with the fact that she wasn’t able to have a drink before the show started, Slate talked about her early experiences with sex, joking about her teenage years as a 4-foot-8-inch “dork” who didn’t know how to use tampons.

“My mom didn’t tell us how to use the tampons … and (I) thought it laid across your vagina like a hot dog in a bun,” she said. “I didn’t even know what the string was — like a flag? Like a tail?”

Weinberg junior Madisen Hursey said she didn’t know much about Slate before coming to the show but recognized her from her work as the voice of Marcel in “Marcel the Shell,” as she and her friends were obsessed with the short film in middle school. In the show, Slate revealed she’s working on a new “Marcel the Shell” film.

“She was really funny and I liked her energy. It was kind of frazzled but in a funny way,” Hursey said. “She had a very good, diverse array of things to touch on. … I also liked that she threw jabs but also actual, real statements in.”

After her stand-up performance, Slate was joined onstage by filmmaker and Communication Prof. Kris Swanberg. The two artists spoke about Slate’s early performances and Slate offered advice to budding student-artists, saying they should have “equal amounts of fun and learning.”

During the Q&A, Slate and Swanberg touched on the #MeToo Movement and the allegations made against comedian Aziz Ansari, a former castmate of Slate’s. In January, a woman told babe.net Ansari allegedly persisted in having sex with her during a date even though she refused. Slate said she doesn’t “know much” about his response to it, but she felt like society was missing an opportunity to “have a conversation about how coercion has somehow been built into what is a ‘normal’ sexual experience and it just shouldn’t be and it isn’t.”

“The fact that there is a huge misunderstanding and that instead the conversation turned towards ‘#MeToo has gone too far’ or ‘This man’s career is being ruined’ is like, don’t you understand that we’re missing the moment to talk about the intricacies in what we think are normal sexual interactions that just don’t work for us, they’re not humane, they’re not right,” Slate said.

The show also featured comedian Gabe Liedman, a close friend of Slate’s, who writes for shows including “Brooklyn Nine-Nine” and “Transparent.” Liedman opened the show saying he and Slate had some chicken fingers in the Technological Institute before the show. During his set, Liedman spoke about still being on a recovery process from the 2016 election.

“That was 15 months ago. (I’m) feeling a little bit better every day as we approach the finish line,” he said. “Can’t believe it’s only been a year. That’s actually really f****d up.”

He said after President Donald Trump was elected, people told him that, as a comedian, he should be happy because he’d have “four years of great material.”

Liedman said that wasn’t the case at all, because, “in addition to being a comedian, I am a human being, which means I do have to live through this experience just like everyone else.”

During the Q&A, Slate was asked about her reaction to current events and how she uses comedy to cope. The comedian said she gets so overwhelmed she “can only look at it from what I’m trying to do.”

Slate said it is wrong to act like people aren’t listening to what she does or says, which is why she tries to be “honest about what’s going on out there.” She also touched on how previously, she and other comedians would “kind of throw around terms that we wanted to own that were derogatory.”

“I don’t want to hear any of that anymore,” Slate said. “With a racist president, I’m like, ‘You don’t know what you’re touching when you say this stuff anymore.’ I don’t want one person to feel marginalized because I threw around a term that maybe I’m comfortable with but causes them pain.”