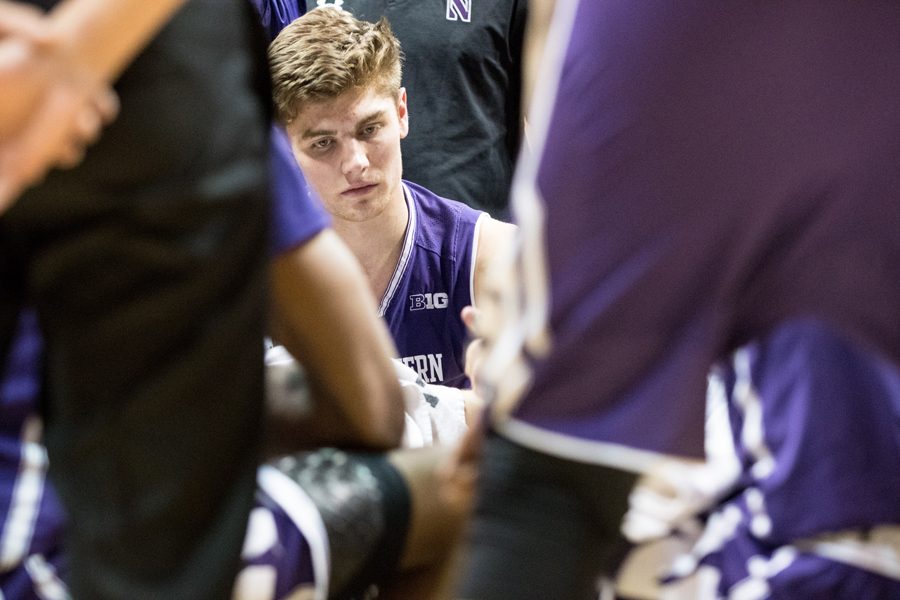 Gavin Skelly stays on the ground. The Cats couldn’t maintain their effort for forty minutes in their loss to Penn State.

NEW YORK — In the final four minutes of Northwestern’s 65-57 loss to Penn State in the second round of the Big Ten Tournament on Thursday night, the 2017-18 season slowly but definitively slipped away.

Less than 30 seconds later, Carr sank his fifth 3-pointer of the night to give Penn State a 1-point lead. Exactly 20 seconds after that, McIntosh missed the first free throw of a one-and-one, and it seemed like the energy the shorthanded Cats drew from in the first half was finally starting to run out.

Penn State grabbed the ball off the miss, but the Cats forced a travel and took it back with 3:34 to play. Senior guard Scottie Lindsey drove the ball into the paint and put up a floater that could have given the Cats the lead.

But the shot hit the back of the rim and Lindsey was called for the offensive foul, his fifth of the game. Without hesitation, he walked straight from where he landed underneath the basket directly to the NU bench.

“It was a big play,” Collins said. “When you’re only playing seven guys and your leading scorer goes out in the last four minutes in a (tight) game, it’s going to affect the entire team.”

The Nittany Lions took possession after the timeout and guard Josh Reaves sank a contested 3-pointer to stretch the lead to 4. McIntosh’s 3-point attempt on the next possession hit the front of the rim and fell into the hands of Reaves.

Penn State slowed down its tempo on the other end, and with 6 seconds left on the shot clock, Carr pulled up from the top of the key and hit the victors’ 13th 3-pointer of the night.

“They just went to some of their favorite action and just got (Carr) in ball screens,” McIntosh said. “He obviously knew it was winning time, and he stepped up and got aggressive offensively and was just looking to make plays. And to his credit, he did.”

Two free throws from forward Lamar Stevens with 54.9 seconds to play put the nail in the coffin and gave Penn State an 11-point lead.

McIntosh left the game after those free throws, checking out for the final time in his college career. The Cats’ third senior, Gavin Skelly, left the game with 24 seconds to go after scoring his final point of the game from the free throw line. The three seniors watched the last moments of the 2017-18 season, and of their NU careers, together from the bench.