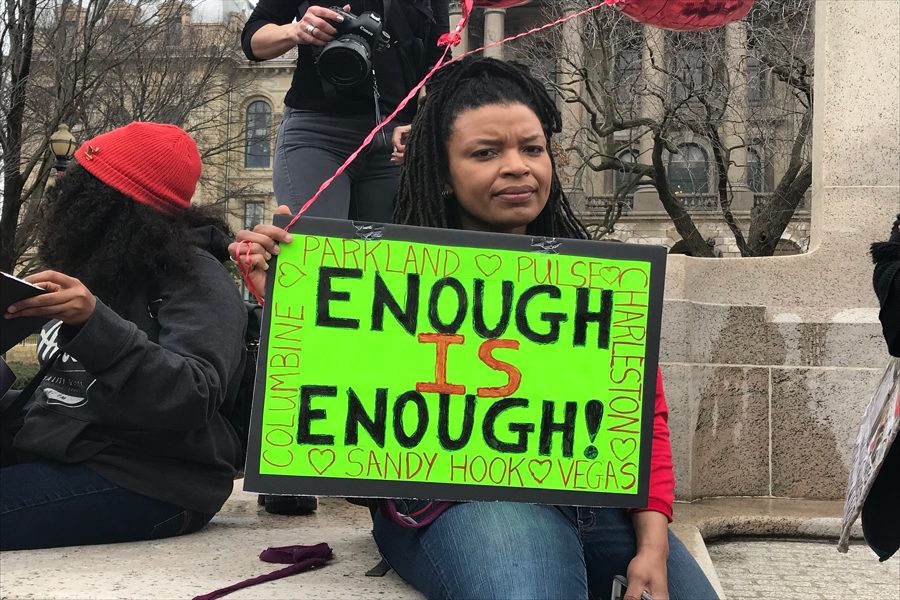 On Wednesday morning, more than 60 Evanston and Chicago residents hopped on a bus to the State Capitol in Springfield in response to recent gun violence, then watched the Illinois House of Representatives pass six gun control bills.

The travellers joined 500 people for a rally organized by the Illinois chapter of Moms Demand Action for Gun Sense in America, a national organization advocating for what the group calls “common sense” gun control. In the same afternoon, the Illinois House of Representatives passed six gun control measures, banning bump stocks, raising the minimum age to purchase assault weapons from 18 to 21 and creating a gun dealer licensing system, among other reforms.

Nina Kavin — co-founder of Dear Evanston, a Facebook page discussing race and inequity in the city — organized a bus that left Evanston at 5 a.m. Kavin said participants visited state Reps. Laura Fine (D-Glenview) and Robyn Gabel (D-Evanston) to thank them for supporting gun control legislation and joined other protestors for a rally in front of the capitol.

Kavin said some participants watched the proceedings as the House voted on gun control measures.

“There’s a lot of energy on this bus,” Kavin said. “I feel amazing at the outpouring of support for this bus trip. … You can look at all the people who are out there to support change and progress, and that’s what I saw while organizing this.”

Kavin said she was “ecstatic” about the measures passed Wednesday, and that it was a privilege to see the vote the day she was there.

Betsy Storm, co-leader of the Evanston chapter of Moms Demand Action, said it was a coincidence the House voted on gun control measures the same day of the rally. She said the organization planned their lobby day months before, but that it was a “present” for the advocates.

“Gun violence prevention work is difficult, challenging work,” Storm said. “To see the fruits of your labor … in one day materialize, it’s really reaffirming and nurturing for people who are already in the movement. Second, it helps bring new people to the movement because they can see — particularly younger people — that it’s possible to make change.”

Storm said she thinks the tipping point for bringing gun control reform is approaching. She thanked the students from Marjory Stoneman Douglas High School in Parkland, Florida, for using their voices under such sad circumstances.

Recent Evanston Township High School graduate Brethney Neal said she had a “great day” learning about civic engagement and gun control while on the trip to Springfield.

“I experienced how bills got passed,” Neal said. “It’s something that is talked about a lot in school, and you don’t really understand the process until you see it firsthand. It was a very educational and fulfilling trip.”

Neal said she decided to go because she worries about her friends going to school and her family going to church — two places where mass shootings have occurred — and wants more gun legislation to make these spaces feel safe again.

Kavin said she was happy about her day in Springfield, but recent school shootings tainted her view of progress. She said gun violence does not just happen with semi-automatic weapons, highlighting the recent murder of Yakez Semark in Evanston.

“I organized this trip because of all the young people who are lost to gun violence in Chicago and Evanston,” Kavin said. “A lot of people are motivated whenever there’s a mass shooting, and obviously that’s something to be motivated by, but I was motivated more by the fact that so many people are killed in Chicago and killed in Evanston with handguns every day.”