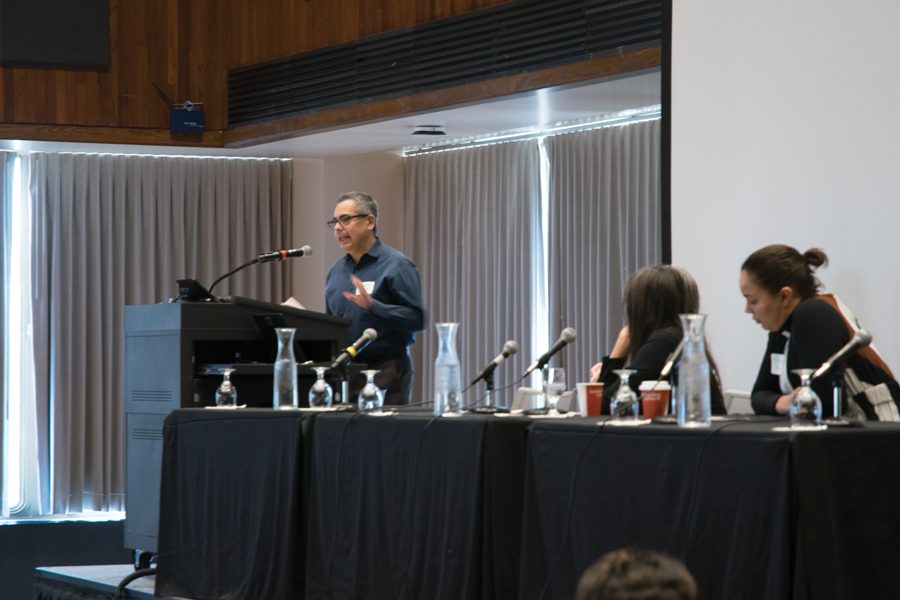 Sociology Prof. Hector Carrillo speaks Wednesday at the Women’s Center symposium. The event, which was themed “Critical Intersections,” brought faculty and alumni to speak in honor of the Center’s 30th anniversary.

To celebrate 30 years on Northwestern’s campus, the Women’s Center hosted a “Critical Intersections” symposium Wednesday to commemorate past achievements and look forward to the Center’s future.

The symposium was based on Kimberlé Crenshaw’s feminist concept of intersectionality, the idea that a person’s experiences cannot be defined by any singular identity. The theme was chosen to reflect the intersection between the histories of the Center and the University, Women’s Center director Sekile Nzinga-Johnson said in her opening remarks.

Additionally, Nzinga-Johnson told The Daily she hoped attendees would explore the intersections among intellectual, political and community work because they are applicable to all spheres of the Center’s operation.

“Women’s centers have always had an intellectual history and a political history because we’ve had to fight to actually even get on campuses,” Nzinga-Johnson said. “Community building, intellectual engagement and having this political lens, which for me … is a feminist lens. I think all of those actually operate together.”

The symposium began with a faculty panel in the morning that featured Pritzker Prof. Destiny Peery; Feinberg Prof. Francesca Gaiba, the associate director of the Institute for Sexual and Gender Minority Health; sociology Prof. Hector Carrillo; and history Prof. Tessie Liu, a past director of the Gender and Sexuality Students Program.

In her introductory speech, Peery highlighted how social media has made it easier for marginalized community members, especially everyday people who aren’t scholars or industry leaders, to use their voices.

It is also important for the NU community to be actively involved with the problems being worked on and theorized about, Peery said.

“That means not just sitting in the room or on this campus. It means going out and engaging,” Peery said. “If you want to change policy or you want to change law or something like that, you need the people who are a part of that to be at the table.”

Carrillo, who spoke about his work in exploring the overlap between sexual identification and social constructs, said he found the different approaches in academia to intersectionality to be enriching and refreshing.

Peery’s message of leaving the NU sphere and venturing into the lives of real people was also noteworthy, he told The Daily.

“My hope is that this kind of gathering will inspire a lot of people to continue doing what they know to do in communities,” Carrillo said. “I think community-oriented work is very important, especially when it’s informed with the kind of knowledge and the kind of practice that emerges from an institution like Northwestern.”

The afternoon alumni panel brought together social justice leaders and professionals from a variety of NU graduation years.

Overall, S. Tay Glover, graduate assistant at the Women’s Center, said she was excited to see how the variety of panelists brought together different parts of the NU and Chicago communities and made space for new conversations.

“There’s this idea of informal and kitchen table conversations and actual, interpersonal, consciousness-raising moments being historically really central to any sort of feminist coalition building,” Glover said. “Women’s centers have always been and still are those critical liaison places.”