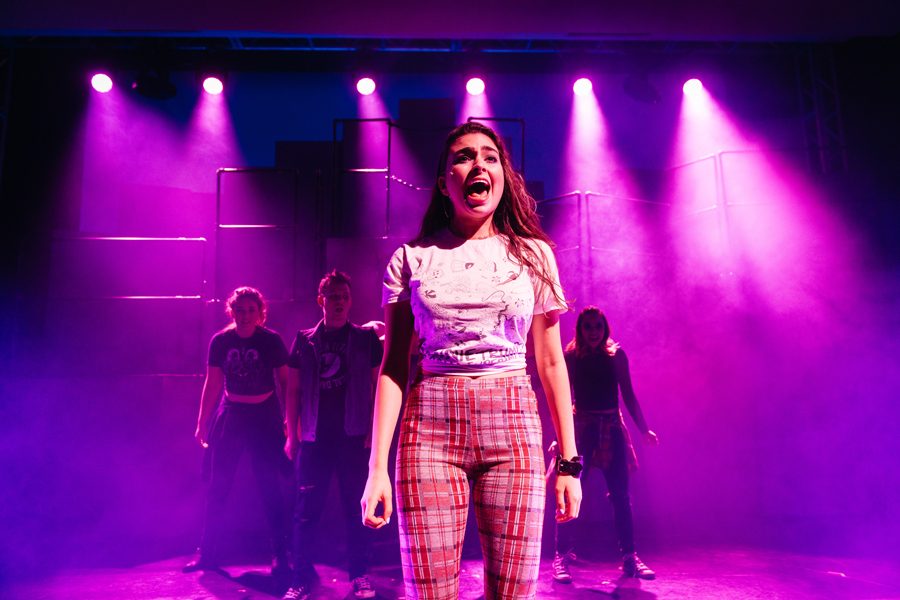 Alexa Moster performs in 'Jasper in Deadland'. The punk rock musical is a modern re-imagining of the Greek myth of Orpheus and Eurydice.

With its captivating special effects, punchy choreography and gritty belting, “Jasper in Deadland” breaks a lot of musical theatre rules. What else would one expect from one of the first punk rock musicals to be performed at Northwestern?

“Jasper and Deadland” has been done fewer than seven times in the world, producer Jonathan Gelb said. Student theater company Lovers & Madmen is bringing the new show to McCormick Auditorium on Friday and Saturday.

The play is a modern adaptation of the Greek myth of Orpheus and Eurydice. While the myth follows Orpheus on his journey to reunite with his dead wife in the underworld, “Jasper in Deadland” tells the story of a high school swimmer who dives into the fictional Deadland to save his friend Agnes.

Communication junior Josh Krivan said he felt Jasper was a challenging role to play in terms of both emotional range and vocal intensity. The cast engages their full voices for the entirety of the two-hour run time, he said.

“It’s really great because it allows us to be more engaged, and really utilizing our instruments to the fullest extent, but it’s also quite demanding,” Krivan said. “Especially with my role, it’s pushed me to my limit vocally, and I think it’s helped me become a better singer.”

Communication freshman Alexa Moster plays Gretchen, Jasper’s guide to the underworld. She said she learned discipline from her character, and exercised this discipline in prioritizing her vocal health during the production process.

The choreography also goes beyond traditional musical theatre norms. Communication sophomore Tucker DeGregory said the choreography is less about structure and form, and is driven more by character. He said he drew on his personal background in hip hop and street dance to bring hard-hitting punk rock movement to the stage.

“Something that’s important to me with this show is to have the audience feel kinesthetic empathy, to feel like they want to get out of their seats and jump up and jive with us like they’re at a concert, or at a club,” DeGregory said.

DeGregory said the set design is conducive to movement because there is a lot of open ground space for the cast to fill. McCormick senior Brianna Downs, the set designer of “Jasper in Deadland,” said she was conscious of the limitations of the wide and shallow stage of McCormick Auditorium, which is a not a traditional theater space. She said her engineering background helped her optimize the floor space so the cast would be able to move around freely.

Downs took a creative leap with the set, just as the actors and choreographer did with the sound and movement. Instead of using the 2-by-4 and 4-by-8 panels usually used in a StuCo production, she built 16 asymmetrical platforms to create the illusion of a city carved out of rock.

The show’s lighting is done in blues and greys rather than the fiery reds one would normally associate with hellfire, Downs said, allowing occasional moments of color to stand out against a monochromatic set. Those pops of color are among the “fun surprises” Downs said the audience can expect from the show.

Gelb, a Communication junior, said “Jasper in Deadland” does not take itself too seriously. The immersive special effects, fresh music and uplifting message should create an awesome theatrical experience overall, he said.

“The show itself combines Greek mythology and punk rock music in a way that has never been seen onstage before, much less at Northwestern University,” Gelb said. “I think everyone will leave the show feeling so joyful and so pumped up to tackle finals at the end of this quarter.”