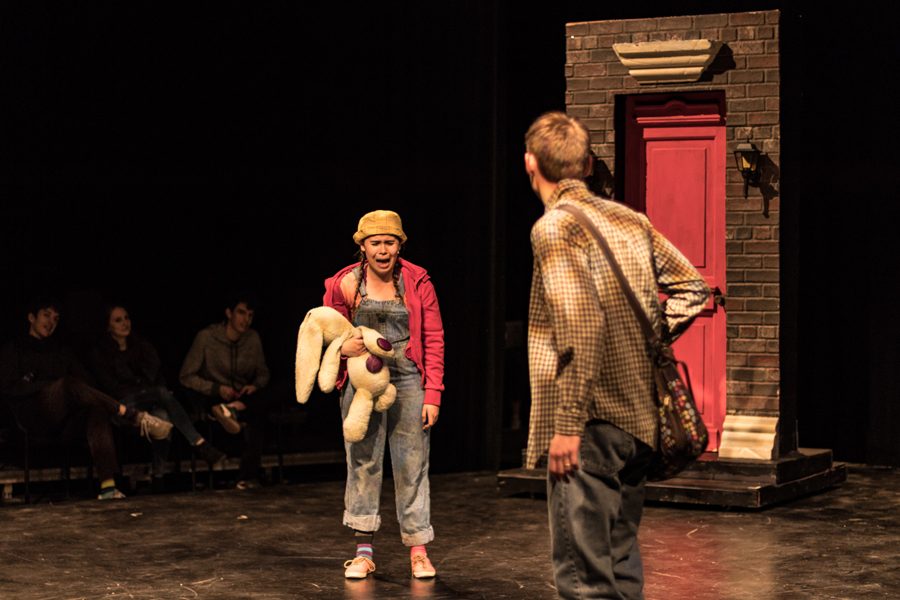 Trixie, played by Mia Nevarez, throws a tantrum. Nevarez said it was challenging to convey emotion through her character’s babble.

Father-daughter relationships can be tricky, especially when one speaks English and one speaks toddler babble. In “Knuffle Bunny: A Cautionary Musical,” a stuffed bunny might prove the key to connecting parent and child and transcending the language barrier.

Presented by Imagine U, “Knuffle Bunny: A Cautionary Musical” tells the story of a 16-month-old toddler named Trixie and her father, who embark on an adventure to the local laundromat to save her stuffed bunny. The musical is based on Mo Willems’ award-winning picture book of the same name.

While the show features funny laundromat capers, it also highlights the significance of family love, said Adam Brody, who plays Trixie’s dad. The Communication senior added that the musical features limbo, ballet, puppets and flying laundry. He said his initial reaction to the script, also written by Willems, was that it had “a lot of gags” and was “a lot of fun.”

Twelve out of 13 performances sold out four weeks before the show’s March 2 premiere, Brody said. He said the primary audience will be children and their parents from the local community, which has encouraged the team to work harder to give the audience a 45-minute show that will “stick with them.”

He said the show’s theme of unconditional love will resonate with parents.

“(The show) is something that I think parents are really going to connect to, just as much as the kids are gonna really enjoy it,” Brody said.

Brody said parents and their kids don’t always have to understand what the other wants to appreciate each other.

Mia Nevarez, who plays baby Trixie, said playing a 16-month-old toddler helped her recognize how much effort parents put into trying to understand their kids before they can even speak.

Nevarez said while she enjoys her role, she found it challenging, as she had to figure out how to give emotional meaning to Trixie’s babble.

Lucette Panush, who plays Trixie’s mom, said she drew inspiration for her character from her own mother to connect with a role typically played by an older actress. The Communication sophomore added that what differentiates a children’s musical from other types of musicals is its ability to “get to the heart of the message.”

Brody, education director of Imagine U, said, in addition to the musical, the group will host post-show activities, including a 45-minute workshop where young audience members will have the opportunity to create their own drama.

Brody said this production is “really about the kids” and giving them a good time. Even though their enjoyment is the main focus, Brody said the themes of love and family in the show will resonate with anyone who comes to see the show.