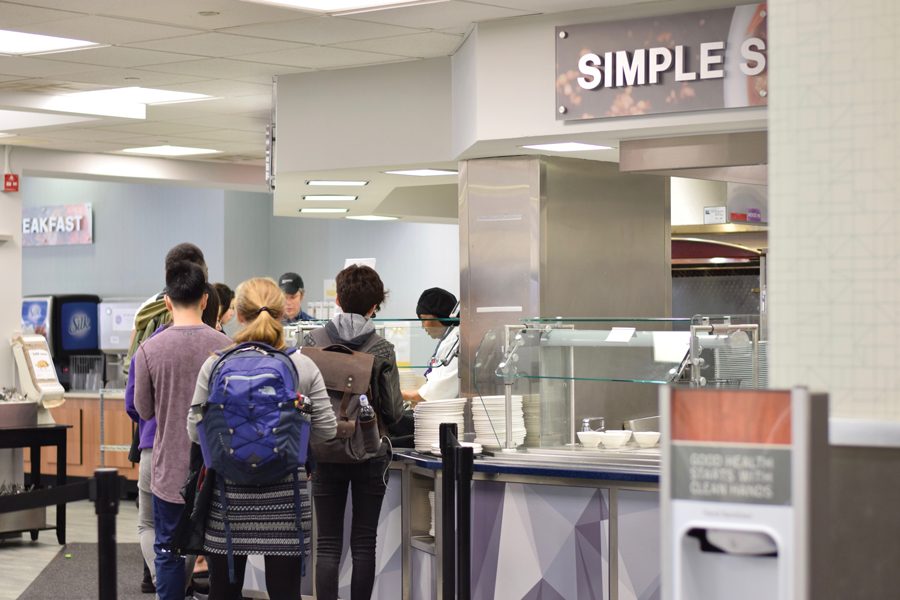 Students wait in line to get food at Sargent Dining Hall. Several groups on campus, including student organizations and administrative departments, have been addressing food insecurity on Northwestern’s campus.

Though most Northwestern students generally appear to be fairly affluent, food insecurity still affects some students every day, causing some student groups and University officials to increase efforts to help those struggling with the issue.

“Food (security) isn’t just having food to eat; it is also having access to nutritional food and healthy food that can aid your body,” Taylor Shelton, president of The Campus Kitchen at Northwestern said. “So it’s not just eating Cheetos and stuff from the vending machine.”

In addition to a lack of food, the U.S. Department of Agriculture uses “reduced quality, variety, or desirability of diet” as a metric for food insecurity.

A January New York Times opinion piece by Sara Goldrick-Rab mentioned Northwestern as a university that struggles with food insecurity. Goldrick-Rab — founder of research institute the Wisconsin HOPE Lab, which has conducted national studies on food insecurity — said in an email to The Daily that some campus organizations, like The Campus Kitchen at Northwestern and Swipe Out Hunger, have reached out to her team.

“(Northwestern) is also a place with lavish dining halls, even sushi bars, juxtaposed with these struggles and a president known for his research on financial aid,” Goldrick-Rab said.

On Jan. 15, several campus organizations, including The Campus Kitchen at Northwestern and Swipe Out Hunger, met to discuss food insecurity on campus. Shelton said the coalition talked about ways to make progress with a campus food pantry and erasing stigma.

The Weinberg senior told The Daily food insecurity is “a reality to many Northwestern students,” and the University must be aware of that if it is committed to inclusivity.

Heather Parrie, The Campus Kitchen at Northwestern’s community partnerships coordinator, told The Daily in an email that food insecurity can cause stress, poor nutrition or hunger. This can harm students’ mental and physical wellbeing, she said, and “affect grades, extracurricular participation and social health.”

“Students from low-income families, first-generation college students, students of color, LGBTQ+ students cut off from family support, and parenting students all face enormous barriers to academic achievement anyway,” Parrie said. “Compounded with financial uncertainty that leads to food or housing insecurity, this puts them at an even greater disadvantage to other students.”

A 2016 national survey, “Hunger on Campus,” conducted by several national food insecurity groups, found one in five students at four-year universities may experience food insecurity. The survey also said over 40 percent of students who were on a meal plan were food insecure.

“When I learned it was a problem, I was immediately convicted,” Mitchell said. “And I believe as a person of faith that we have a moral and ethical responsibility to all students, to make sure that all students have enough to eat and that their basic needs are met.”

The Purple Pantry, open weekly at the Sheil Catholic Center, provides food for students who experience hunger because of financial constraints and allows them to remain anonymous. All of its food is donated, and consists of mostly non-perishable items like granola bars and oatmeal, with a few fresh items like yogurt and fruit.

According to an optional, anonymous exit survey from Purple Pantry, 35 people have used the pantry this quarter, totaling more than 50 visits. Twenty-three of those students “skipped a meal or limited food because (they) lacked access to adequate food” one or more days a week, the survey added.

As of now, there is no campus-wide survey or data set to show what food insecurity looks like at NU. Sharitza Rivera, assistant director of Student Enrichment Services, told The Daily that anecdotes show her that food insecurity on campus is about access and choice.

“I was just talking to a student earlier, and he was just saying that he just feels like he doesn’t eat healthy in the dining halls. … He just fills up on pasta and cookies,” Rivera said. “And he knows none of that’s healthy for him. But that’s what’s there, and he’s hungry.”

When she meets students who are facing food insecurity, Rivera said she recommends Purple Pantry, the Student Emergency and Essential Needs fund that helps cover unexpected financial expenses, and Supplemental Nutrition Assistance Program benefits that give some resources to purchase food to work-study eligible students.

She said she has seen a few rare cases of extreme hunger in the past few years. More often, though, Rivera said students have difficulties accessing food because they are busy, and they may not have enough disposable income to fully satisfy their needs. She said people say that Whole Foods Market, one of the closest grocery stores in Evanston, takes “your whole check.”

Over the past year, director of dining Ken Field said Northwestern and its dining provider Sodexo have made changes to try to accommodate students’ needs. These include requiring an unlimited meal plan for freshmen and opening some dining halls during Thanksgiving and Spring breaks.

Field said though Sodexo’s contract is up for negotiation with the University, all new potential dining providers have said they would work to meet the needs of food insecure students.

Deeley said Purple Pantry has also seen several changes in the past year and a half. She said employees of many campus organizations , like Safe Ride, Student Affairs and University Libraries, are volunteering at the Pantry. However, she said it would help to have the University create a dedicated space and staff for the Pantry.

Mitchell and Rivera said food insecure students, especially low-income and first generation students, may face other difficulties besides paying for food. However, Mitchell said while other university pantries may meet other needs — like by distributing hygiene products — right now, Purple Pantry is only able to provide food.

“We’re a community,” Mitchell said. “We’re all Wildcats. We need to take care of each other.”