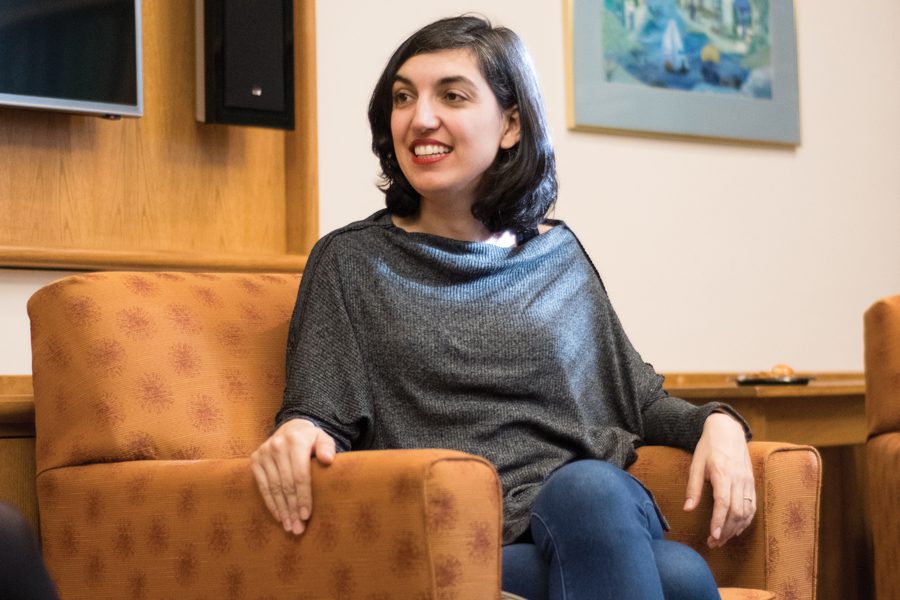 Turkish author Elif Batuman speaks Monday at University Hall. Batuman talked about how she turned her life experiences into her fictional novel, “The Idiot.”

In a Monday talk, Turkish author and journalist Elif Batuman told aspiring writers there is no need to feel ashamed for being “embarrassing and awkward” at a young age.

Batuman, who holds a doctorate in comparative literature from Stanford University, spoke at University Hall to an audience of about 25, many of whom were creative writing students. In a conversation with English Prof. Juan Martinez and Oya Topcuoglu, a lecturer in the Middle East and North African Studies program, Batuman discussed her first book, “The Possessed: Adventures with Russian Books and the People Who Read Them,” and her debut semi-autobiographical novel, “The Idiot.”

The author said she grew up with a unique love for Russian literature. Although Russian literature was a difficult path to choose because of the language barrier, Batuman said she considered herself lucky because the only obstacle separating her and her love for the subject was “a little bit of extra work.”

“You don’t get to choose its object,” Batuman said. “Love is a gift.”

Batuman also talked about the naivete of her childhood. “The Idiot” is an autobiographical novel that tells Batuman’s coming-of-age story, with parts of herself and her adolescent experiences reflected in the protagonist — an 18-year-old daughter of secular Turkish immigrants.

“I grew up during the Cold War,” she said. “And now I’m a working adult in the age of identity politics. My mind has gone through so much identity shuffling that it’s actually a miracle that I am able to sit upright and talk to you.”

Batuman said she originally intended to distance her current “smarter” self from her younger, inexperienced self in “The Idiot.” However, while revising her book, she realized that making certain mistakes and finding oneself in comical situations at a young age is nothing to be ashamed about.

In “The Idiot,” Batuman said she chose to write about trivial events of everyday life because she was interested in how human lives are shaped by time. Although the novel is autobiographical in nature, not all of its details are true, she added.

Sarah Bowen, a Weinberg senior in the creative writing program who attended the event, said she hopes to be published herself in the future. As an aspiring writer, Bowman said it is reassuring to hear about the non-linear paths of successful writers.

“I don’t know how I am going to keep going as a writer,” Bowman told The Daily, “so it’s always good to hear somebody else figured it out along the way.”

Students asked during the event how Batuman was able to translate her personal life into fiction.

For Batuman, fiction has been a tool to invent details that disguise truths and protect herself and other people in the story, which she said made her story more difficult to write. However, the author said she believes a novel is making a statement of truth, even if its details stray from reality.

Topcuoglu told The Daily that she thought the students would relate to Batuman’s experiences as a young writer.

“I thought the students would understand that it’s not a bad thing to be awkward and to make all these mistakes at that age,” Topcuoglu said.