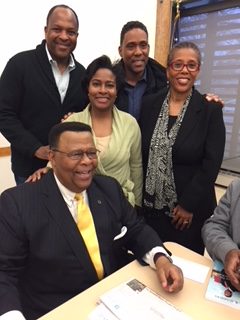 When NBC 5 Chicago reporter and fill-in anchor Christian Farr worked as a television news reporter in Dayton, Ohio, about 20 years ago, he read a description on-air about a suspect. After he finished, a director told him, “I hope you realize the Dayton police are coming to arrest you … because you just read a description of yourself.”

That was how vague the description was, Farr said, adding that media still report vague descriptions — like “black male” — of police suspects today.

Farr was one of four panelists who spoke at “Being Black in Broadcast Media/Entertainment,” an event held at the Levy Senior Center on Saturday. The discussion, moderated by Medill Prof. Ava Thompson Greenwell, covered topics including the lack of diversity in higher-level media positions, representation of black people in the news and the need for audiences to advocate for unbiased and complete coverage.

CBS 2 Chicago political reporter Derrick Blakley said there is a “pronounced lack of African American presence” in higher level positions like managers and producers. These people decide what goes on the air — such as the order of stories, the length of individual segments and their presentation to the public, he added.

Farr said having diverse decision makers is essential in properly covering stories about underrepresented areas. He added that not everyone living in the South and West Sides of Chicago is violent, as they are sometimes portrayed in the media.

“You can’t simply … say, ‘Oh, this is a dangerous neighborhood,’ because it may not be,” Farr said. “Unfortunately, we don’t have people in the newsroom who are decision makers there to say, ‘Hey, we need to cover it this way. We don’t need to be covering it that way.’”

NBC 5 News special contributor Art Norman said having black reporters who know the communities they were covering, like the South Side, makes a difference in the newsroom.
Blakley added that the news media is partially responsible for the public’s perception of black people’s socioeconomic status in the United States.

“People of color, particularly black people, have become the face of poverty in America,” Blakley said. “And white poor people have been erased from our popular culture and our popular consciousness even though they far outnumber black poor people.”

People should communicate when they think a story does not provide an unbiased, complete picture, Blakley said. He added that managers are aware that when one person contacts them, that person is representing the opinion of many people, not just their own.

Fox 32 Chicago producer Tasha Ransom said people who have opinions on a news outlet’s coverage can call in and send emails, adding that “it can’t just be one time; it has to be a constant.”

“We need you to be advocates for fair coverage, especially when you see something you think is not fair or is biased or does not give a complete picture,” Blakley said. “Something can be fair in the narrowest sense but still give a distorted picture in the wider sense.”

A previous headline in this story incorrectly stated the organization that put together Saturday’s event. The event was sponsored by the Evanston Branch NAACP, African American History and Genealogy Study Group of Evanston, Shorefront Legacy Center and Haitian Congress to Fortify Haiti. The Daily regrets the error.