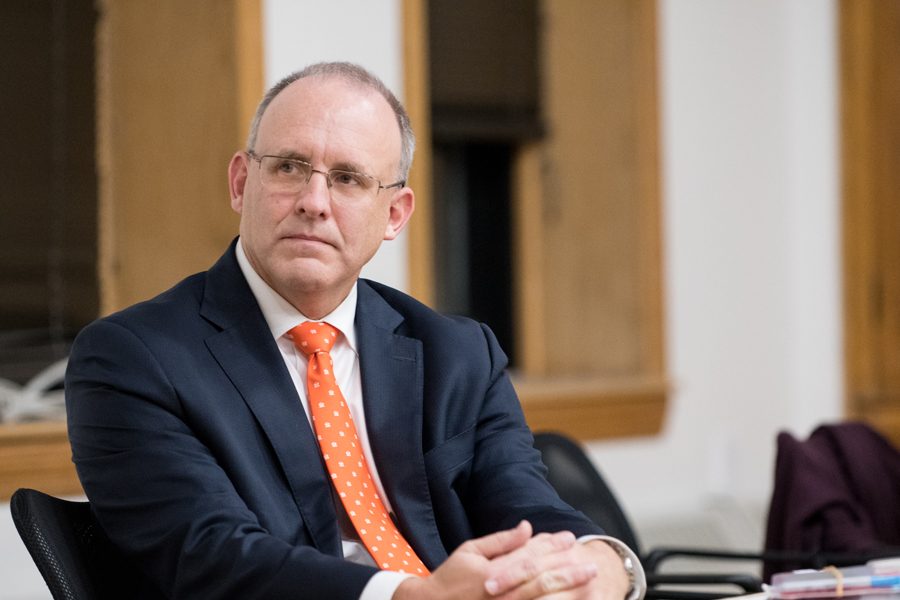 Mayor Steve Hagerty speaks at a meeting. Hagerty said he felt a “little hopeless” in the wake of recent acts of gun violence.

With the nation tuned in to conversations on gun violence and gun control, Mayor Steve Hagerty called a community meeting Thursday to inspire the people of Evanston to take action.

“Like a lot of people, I feel a little hopeless,” he said during the meeting. “I feel sad that our country can’t recognize that we need to step up and do something.”

Hagerty organized Thursday’s meeting to brainstorm and discuss concrete actions Evanston residents can take to combat gun violence. The meeting featured several speakers who work against gun violence — including representatives from Moms Demand Action for Gun Sense in America and People for a Safer Society — and comments from Evanston residents.

The meeting follows a high school shooting Feb. 14 in Parkland, Florida, Evanston Township High School graduate Yakez Semark’s murder on Feb. 8 and the death of a Chicago police officer who was killed while off-duty.

Rev. David Jones, one of the speakers at the meeting, urged citizens to follow the lead of activists in Florida and take this opportunity for action.

“I’m a priest, and I’ve heard a lot about thoughts and prayers every time something like this happens, and I’m a little bit tired of thoughts and prayers,” he said. “Let us follow the example of our current national leaders, who are mostly in high school, and figure out together what to do.”

Denyse Stoneback — who founded People for a Safer Society, a Skokie-based gun violence prevention organization, the day after the Sandy Hook mass shooting — spoke about two opportunities for legislative action in Illinois. The Gun Dealer Licensing Act would increase regulation on gun dealers and fight illegal firearm trafficking, while the Lethal Violence Order of Protection Act would allow people to petition courts to temporarily remove firearms from immediate family members if concerned about a risk of injury.

After the speakers presented, Hagerty opened the floor to the audience and asked them to focus on steps individuals in Evanston can take to address gun violence. Many of the community members spoke about personal experiences with gun violence, telling stories about the deaths of family members or close friends.

Several others focused specifically on gun violence in Evanston, and a few brought up the recent homicide of the twenty-year-old Semark and addressed inequalities in safety and opportunity.

Earlette Wright, a substitute teacher who was born and raised on the west side of Evanston, was among those who raised concerns about disproportionate violence in her community.

Hagerty said inclusivity is something Evanston needs to continue addressing and said he hopes recent tragedies will be a catalyst to inspire action against gun violence in all communities.

He added that gun violence is happening daily and that a lot of people who live in affected areas feel like their concerns are not heard.

“They only really stand up and show up at meetings and all of this when there’s a mass shooting when all of a sudden it’s a bunch of white kids,” Hagerty told The Daily. “As terrible as these mass shootings are, hopefully, it’s a stepping off point to mobilize a lot more people.”

A previous version of this story incorrectly identified the day Yakez Semark was killed. He was killed on Feb. 8. The Daily regrets the error.