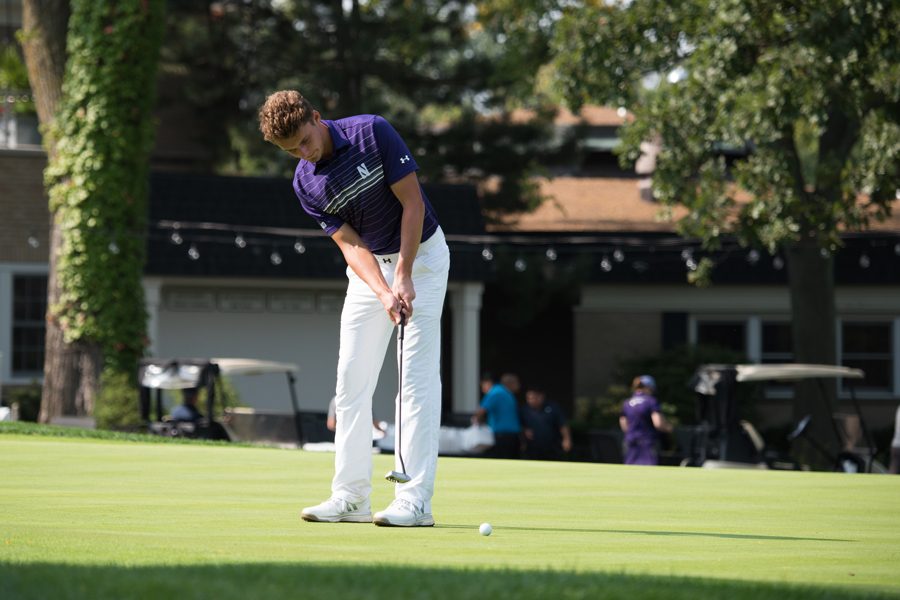 Ryan Lumsden strikes a putt. The junior finished in the top 10 in the Prestige at PGA West.

After a less-than-stellar start to 2018 for Northwestern in Big Ten Match Play, the Wildcats brought the heat this week in La Quinta, California, at the Prestige at PGA West.

Unranked NU finished at 6th overall, topping No. 14 Southern California. In the field of 16 teams, a quarter of them were in the Top 25, including No. 12 Stanford, which played its A and B teams, No. 9 LSU and No. 1 Oklahoma State.

Though the Wildcats finished outside the Top 10 during Big Ten Match Play, they demonstrated their strength during their first stroke play tournament of 2018.

Senior Sam Triplett finished the first day of competition on Tuesday sitting in the top spot, with fellow senior Dylan Wu and junior Ryan Lumsden tied for 17th. Triplett’s 4-under, 67-stroke round was the second-best score in his college career.

The second day of competition on Wednesday proved a little more of a mixed bag, but set the Cats up to finish the contest strong. Lumsden and Triplett tied for 10th and sophomore Everton Hawkins moved up 22 spots to finish at 21st. Inglis said that Hawkins came through for the team after a poor start.

On the other hand, Wu fell out of the top 20 and never returned, tying for 28th; freshman Eric McIntosh tied for 73rd.

Even with the strong start, though, Inglis said they need to continue learning from mistakes and improving in order to be the team that can show up on a national stage.

“I don’t care about beating Stanford’s B-team; we need to beat their A-team,” Inglis said, “and we were close to doing that. Overall, it was encouraging.”

Lumsden said he just kept doing what he has been working on in order to secure his top-10 finish. He agreed it was an encouraging finish, even if they could have done better.

While he said the team didn’t play as well as it could have, he added that they were not far off from what their most competitive performance could be and that with a little more work, they can be on par with the top teams in the field.

“We played with four of the best teams in the country this (week),” Lumsden said. “We didn’t play too well, and we (still only) lost by nine or something, which in golf isn’t that much.”

The team has a short turnaround before heading back out west to compete in Las Vegas at the Southern Highlands Collegiate next week.

Inglis said that even with a top-10 finish, the team cannot slow down their improvement or they won’t be able to keep up with the steep competition they will be facing.

“I don’t want to overplay the way we played just because I think we can do better,” Inglis said. “If we’re gonna win a Big Ten championship, if we’re going to win an NCAA finals and win match play … we’ve got to learn some lessons.”